Clothed in exceptionally innovative exterior lines with futuristic interiors that feel like a modern take on 1970s sci-fi chic, the Admiral XForce 145 is a triumph of the core values of The Italian Sea Group founded in 2013 by Giovanni Costantino. The yard’s technicians were flanked in the design process by Dobroserdov Design on the exteriors and architect Gian Marco Campanino on the interiors and certain parts of the exterior layout. 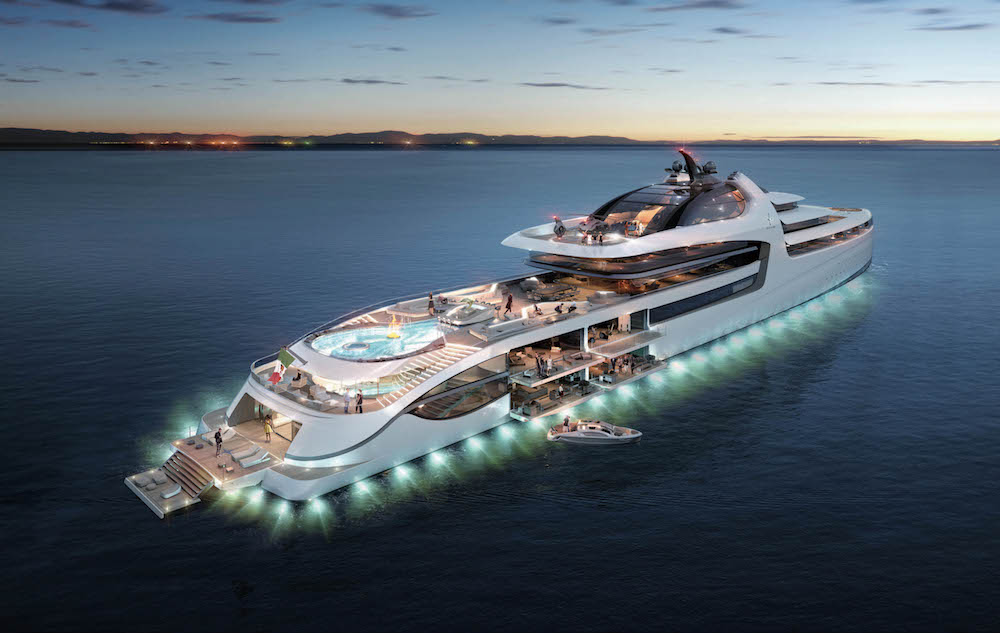 Stretching a luxurious 145 meters in length and 19 in the beam, the XForce 145 is, however, much more than an extravagant exercise in design. It uses the same platform as the  Messina ferry launched in 2013 by The Italian Sea Group owned Nuovi Cantieri Apuania for a start thus making it an incredibly solid alternative for the megayacht world. 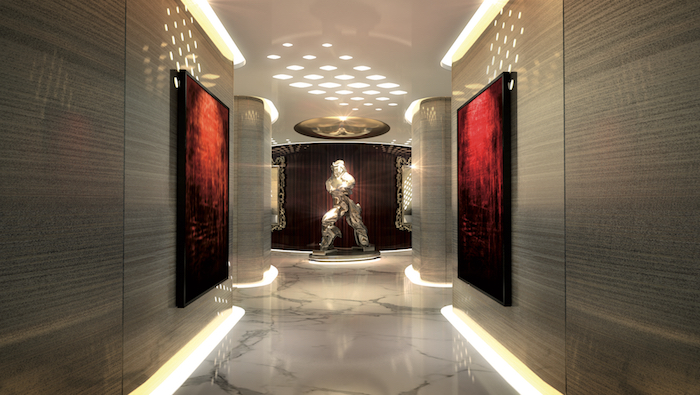 The vessel has a wonderfully low-slung profile with strong lines in which a single styling element connects the decks and extends aft to form the fly. Transparency is clearly a major theme too. “There is an interplay of transparencies with the bow lounge as its focal point: this is an observation area for underway that fuses with the bow by side windows and a transparent dome as its ceiling. 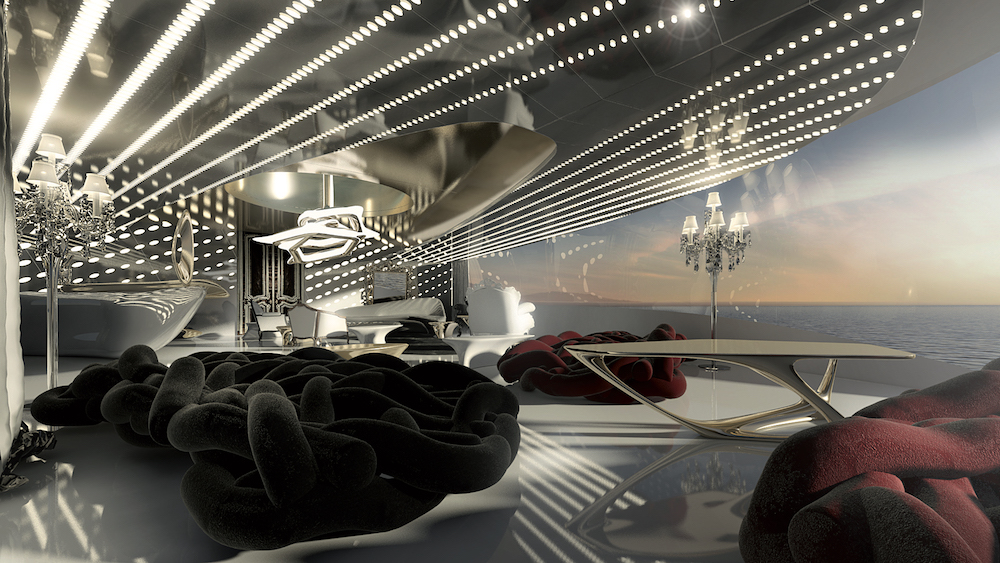 The interiors have a very fluid, contemporary dynamism to them. They seem to flow one into the other with no sense of division between the spaces,” explains Gian Marco Campanino. One good example of this is the aft section where there are two pools and the interior design is heavily influenced the  development of the exterior. 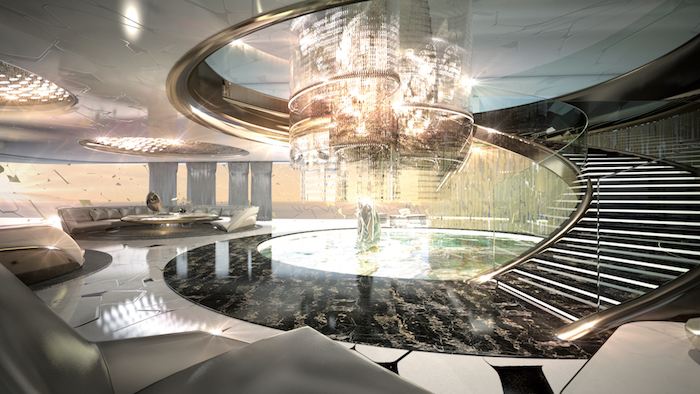 There is a strong visual link between the pools with the bottom of the open-air one on the upper deck acting as a kind of skylight for the second one two decks below. The latter is, in fact, built into the beach club and connects directly to the spa area. This sense of horizontal as well as vertical interconnectivity is a recurring theme aboard the 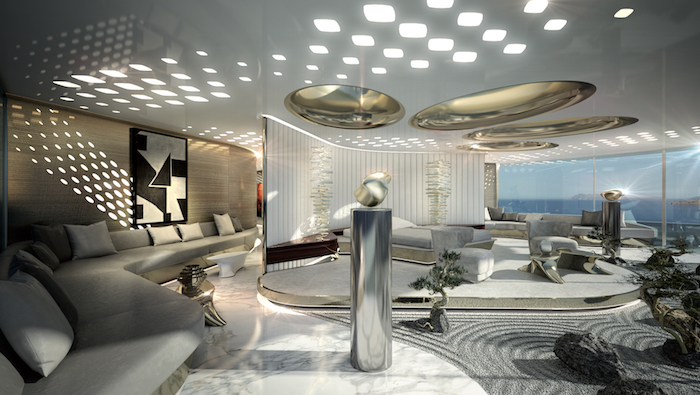 Admiral XForce 145 yet never to the extent that it impinges on guest or owner privacy. The use of separating screens and curved walls that follow the flow of the exterior lines ensures that subtly but effectively. This is especially clear on the owner’s private 55-metre-long deck. 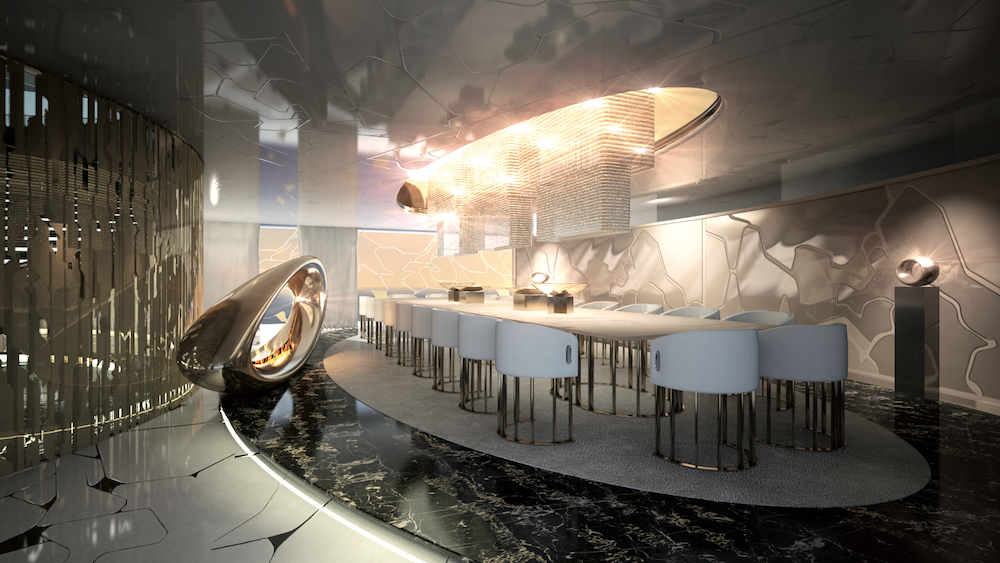 “In the lobby through which you enter the suite, there is the usual area used to display art,” continues Campanino. “This is a real artistic promenade – wonderful for art collector owners – and it is enhanced by the luxe materials used in the décor and furnishings.” All the materials used are sourced in the area around the yard: Carrara marble, bronze from the Tuscan foundries and artisanal metalwork as per the stunning fireplaces and the bas-relief in the big dining room which melds with the saloon. A fine example of the fluid continuum of spaces that works with the futuristic interior lines and innovative exterior ones to create the Admiral XForce 145’s unique design. This is a hugely concrete proposal from a yard with excellent production capacities and a megayacht that, as the slogan so aptly puts it, is ‘born from experience’. 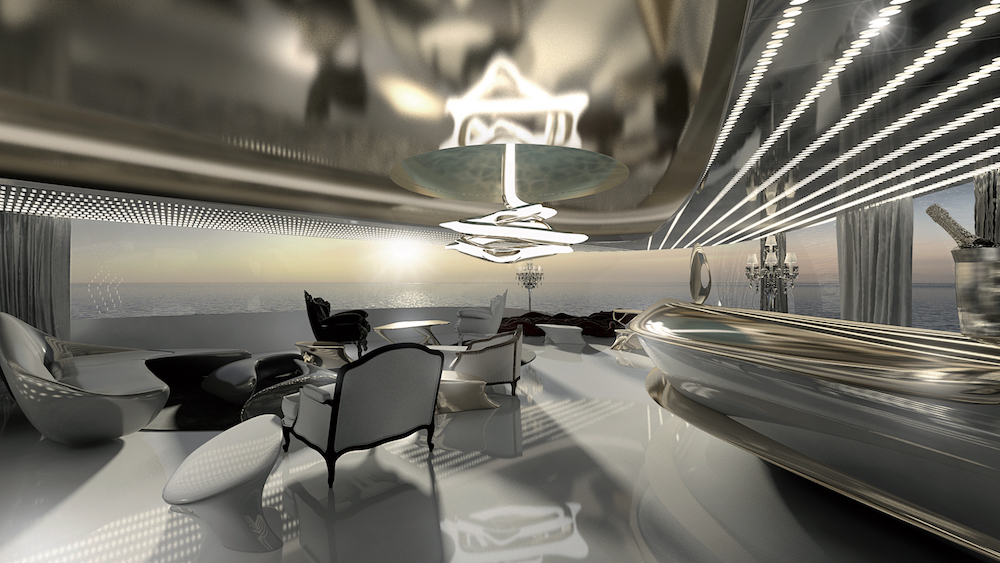