Long a source of huge inspiration, the car world has now entered the nautical arena with a slew of new technical and stylistic solutions. Trail-blazing stuff! Especially in the opening day of the 88th Geneva Motor Show.

Just exactly how does car styling influence yacht design? Looking at the many auto-inspired projects to come on the scene over the last 15 years, there seems to be no doubt that the osmotic exchange between the two worlds has accelerated greatly. They now have much in common. The automotive-derived terms Granturismo, coupé and spider are bandied about very regularly now for new arrivals on the nautical scene. That said, the trend has extended well beyond nomenclature. More and more car manufacturers, particularly at the top end of the market, are now looking to the nautical sector with growing interest. The reasons for this are many and varied. If we take a step back in the years, we will realise, for instance, that in the 1990s, the legendary Riva produced a model called the Riva Ferrari 32, which, the inimitable red of the Maranello marque and the Prancing Horse logo aside, borrowed styling elements from the glorious Testarossa, particularly for its flanks and stern design. 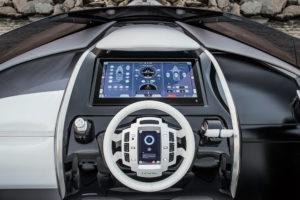 One of the many innovative new features debuted on this model, of which just 40 were built, was a carbon-fibre spoiler. However, when we go a bit further back in time, it emerges that the link between cars and boats was already headline news in the early years of the 20th century. In 1904, the Principality of Monaco played host to the first ever powerboat competition. At the time, the sea and the canots automobiles races provided an invaluable testbench for the first internal combustion engines. Even before that, the leading constructors in the nascent car industry focused their energies on developing new technical solutions to ensure they made it to the top step on the various podia. The newspapers of the day feature reports  of the exploits of the likes of the Fiat-XV, the Mercedes Florio, Daimler II and III, the Mercedes-DL and the Wolseley-Siddeley owned by John Siddeley, who was not only Baron Kenilworth but also founded the Austin marque. 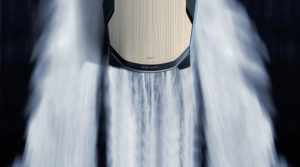 But these boats were far from alone. Other legendary names, not least Renault, Peugeot and Delahaye , also vied for supremacy during the  epic four-year period between 1904 and 1908. Even Vincenzo Lancia responded to the siren call and put the Flaminia’s V6 engine in a racer that went on to win several grands prix in the 1960s and 70s. In fact, it was on the engine front that things really took off. More recently, Lamborghini and Isotta Fraschini engines, to name but a few, powered offshore powerboats between 1980 and 1990. In short, there very deep roots between two worlds and what we are seeing now is a revival and celebration of those connections. Pininfarina is one of the most dynamic proponents of this crossover. Having started out with Magnum and the Primatist yard, the legendary design studio returned to the news with a slew of new projects. 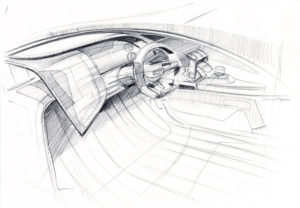 One of the most notable being the 85-metre it penned for Fincantieri as well as the interiors of the new WallyCento Tango and the lines of the 70-metre Aurea for Rossinavi. However, it took four years to develop the first genuine Mercedes boat. Silver Arrows Marine’s ARROW460-Granturismo is a 14-metre that cleverly mirrors the German constructor’s aesthetic.

Tellingly, it was designed by Mercedes-Benz Style which displayed its usual meticulousness. “We worked with Silver Arrows Marine to develop a totally new boat concept,” comments Gorden Wagener, Chief Design Officer Daimler AG, adding: “The Silver Arrow of the Sea brilliantly encapsulates Mercedez-Benz design and dynamic language, bringing its signature dynamic sensuality to the seas.”  References to the Stuttgart constructor’s models are plentiful too, starting with the interplay of convex and concave lines in the boat’s profile which imbue it with both a sense of dynamism and Mercedes-Benz’s signature elegance. The roof, A-pillars and great swathe of windscreen flanked by large side windows have the forms and proportions of a car, a real first for the nautical world. “We didn’t want just another boat, we wanted to develop a whole new concept,” declares  Paolo Bonaveri, Silver Arrows Marine Director of Marketing and Communications. “We worked with Mercedes-Benz Style on the philosophy and materials of every last detail. This R&D work was fundamental to us in creating the Granturismo concept.” This even extended to the paintwork that so sleekly sets off the ARROW460-Granturismo’s “bodyshell”. 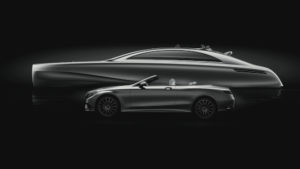 This was done to highlight the side surfaces of the craft which, at the specific request of the Mercedes-Benz designers, flowed so seamlessly that they entirely blurred the usual all-too-visible join between hull and deck. “Many aspects of the ARROW460-Granturismo are unique to this concept. Every last detail has been designed to live up to the name. This is a motoryacht with a personality that really does embrace the seafaring life, combining the finest naval engineering with Mercedez-Benz’s world-renowned innovations and  indisputable elegance.”

Staying in Germany,  BMW has produced some interesting projects through BMW DesignWorks USA too. The Z60, for instance, is an 18-metre sailing yacht built in 2008 by the Zeydon yard in Belgium and clothed in lines that hark back to those of the Bavarian constructor’s celebrated X series. BMW DesignWorks USA followed up this successful nautical foray the following year with the Deep Blue 46, a 15-metre motoryacht for Bavaria. Aston Martin too dipped a toe in the water by penning the lines of the AM 37, an 11-metre open capable of making a blistering 50 knots at full throttle.

The project was a joint effort by Quintessence Yachts, Frank Mulder, who did the naval architecture, and Marek Reichman, Aston Martin’s Chief Creative Officer and Design Director. “I am a designer and I find all products fascinating,” comments Reichman. “However, I do feel that, cars and homes aside, boats are the most emotionally-involving products. They are beautiful objects that exude a sense of freedom, power, elegant and speed. The AM 37 is the result of a collaboration with Quintessence Yachts inspired by the idea of broadening Aston Martin’s horizons. The yacht is a natural extension of the brand because it transfers the Aston Martin concept of luxury and elegance to the sea.” The car design references are clear in a whole list of details, most notably the carbon-fibre “dashboard” which is very much auto-inspired as is the steering wheel which features luxe leather inserts. Most of the focus with the exterior lines was on striking a balance between the boat’s forms and the proportions, something achieved by crafting a very clean, spare design.

Also in the United Kingdom, another great automotive name, Jaguar Land Rover, has thrown itself in the nautical arena with huge enthusiasm. On the one hand, it used the America’s Cup to transfer its aerodynamics skills and competencies to the Land Rover BAR team and boat, while on the other, Jaguar views the nautical world as a source of endless inspiration. It takes it so seriously, in fact, that it has produced its own boat concept. “Historically, cars and boats have visually communicated a sense of movement,” points out Ian Callum Design Director at Jaguar. 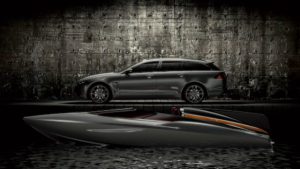 “That’s something I feel with great passion and so that’s why I like boat concepts as much as cars. In boats, particularly sailing ones, I find it intriguing that how striking a balance between technology and function can produce a stunningly beautiful object. 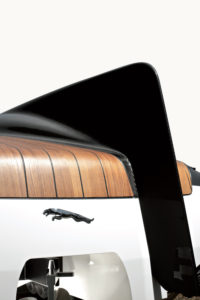 Yachts communicate a sense of purity that is second to none. Car designers are looking very closely at the yacht design world. At the launch of the XF Sportbrake a few years’ back, I ended up involved in the design of a Jaguar powerboat. It was a great opportunity to transfer Jaguar’s world and vision to an object that was not a car but in which concepts such as elegance and performance would be very evident,” concludes Callum.

On the subject of concepts, the Peugeot DesignLab’s experience is also worth a mention.

The talented Thomas Josson and Thomas Rohm produced two very intriguing motor and sailing concepts (one each) that have a distinctive flavour of the French marque’s styling.

It is a very short step from concept to reality, particularly where Lexus is concerned. At the start of this year, in fact, it whipped the wraps off the Sport Yacht which right now is still at the prototype stage but was crafted at the behest of Toyota boss and Lexus International Akio Toyoda who asked the designers to give him a nautical reinterpretation of the Lexus look.  The result is a 12-metre open shrinkwrapped in taut lines that create a distinctively sporty, dynamic look yet also incorporate the Japanese company’s trademark timeless elegance. 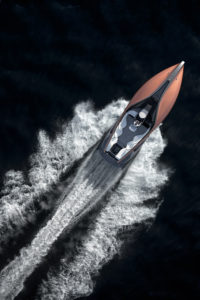 Lexus worked with Marquis on the build, choosing CFRP (Carbon Reinforced Polymer) composite for the hull reinforced with carbon-fibre, a method widely used in track cars and Lexus supercars. Interestingly, Videoworks was also involved in the production of the integrated audiovisual sysem.

The  Niniette, on the other hand, is a futuristic 20-metre yacht that brought together the talents of heavy-hitters Palmer Johnson and Bugatti. “The Niniette is a genuine member of the Bugatti family,” explains Etienne Salomé, Design Director at Bugatti. 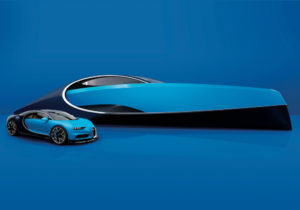 And it is true that everything from her forms to her two-tone exterior livery are absolutely Bugatti, underscoring her links to the brand-new Chiron.   “The Niniette will always be seen as an authentic Bugatti – even well out of port,” declared Salomé.

In September, we got an up close look at the first Dynamiq GTT 115, a 35-metre motoryacht with exteriors penned by Studio F.A. Porsche. 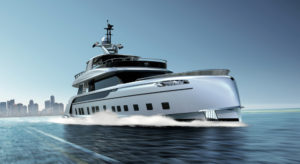 Here too auto references, particularly nods to the Porsche 911, are particularly clear in the detail of the hard top, the hull and superstructure. The combinations of wood and aluminium used in the interior too were inspired by the dashboard of the Porsche Mission E Brown. But this wasn’t F.A. Porsche’s first seafaring adventure. Towards the end of the 1980s, the Austrian-based studio produced the stunning  Porsche Kineo, a 9-metre hull built using materials that at the time were absolutely leading-edge – think Kevlar, carbon-fibre and Airex. Yet another example of what an incredibly fertile laboratory of ideas the worlds of car and yacht design make.