On February 5th, the eyes of the world turned once again to Livorno, where Italian shipyard Benetti successfully launched FB272, a steel yacht with aluminium superstructure built to comply with the PYC (Passenger Yacht Code). 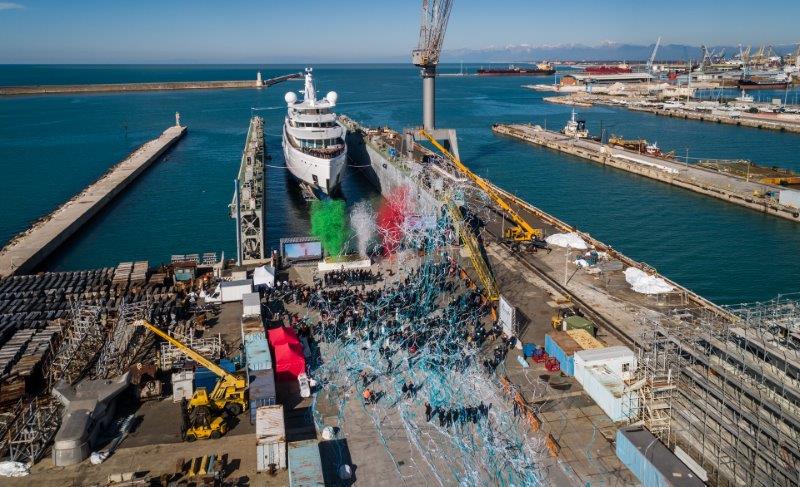 FB272 has a displacement of above 5,500 GT, a length of about 100 meters and a beam of 17 meters. The yacht is fitted with a pioneering hybrid propulsion system with diesel-electric engines and two Azipods propulsion units connected to a special battery pack conceived and provided by the owner for total vibration-free navigation in absolute silence. Less than two months since Benetti launched the giga yacht FB277, the Shipyard celebrates the successful launch of FB272, the second of three giga yachts to be revealed in a few monthsand a yacht with an entirely unique profile that was conceived by the owner. Prior to going to contract, the owner spent significant time in the development of the exterior design, initially with Hugo van Wieringen from Azure Naval Architects and then with the assistance of Reymond Langton Design and Zaniz Jakubowski of Zaniz Interiors. The exterior design was refined post contract with the assistance of Benetti’s in-house designer, Giorgio M. Cassetta, supporting Zaniz Interiors who took over responsibility for both the exterior and interior design of the yacht.

Interior design for the guest areas and crew spaces were conceived and developed by Zaniz Jakubowski of Zaniz Interiors. She also provided her unique artistic expertise in luxury yacht designing to develop a wonderful exterior décor fulfilling the owner’s brief. Known for conceiving spaces that work in synchronicity with their surroundings, this sought-after designer has put her iconic stamp on FB272.

The generation/propulsion package is obtained by 6 generators of approximately 1,000 KW each. The electricity produced by those generators is managed electronically, by a sophisticated fully integrated power management system, to feed the consumption of the services on board and the electric motors of two Azipods of 2,200 KW each. The spare electricity is also used to charge 35 tons of batteries which can operate the yacht for 12 hours with no engine running. The yacht is equipped with a waste heat recovery system conceived by the owner that is capable to feed the yacht and save electrical power in line with the latest green environment requirements.