Benetti announced the sale of its seventh Fast 125’ unit, BF107, a 38-meter yacht with exterior styling by Stefano Righini and equipped with the Azipull Carbon 65 propulsion system designed by Rolls Royce.

BF107, ordered by a Turkish owner, belongs to the Benetti Fast product family that has been such a success since its launch, selling a total of seven units to date. The main feature of the series is the AZP C65 propulsion system, which was developed jointly with Rolls Royce and embodies the most advanced technology on the market. A total of 38.1 meters in length, BF107 has four decks and five guest cabins. 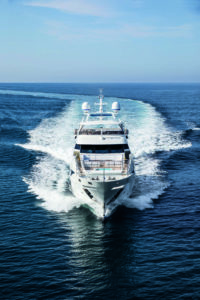 The sporty exterior styling by Stefano Righini features horizontal windows to give the yacht an even more sleek and streamlined appearance.

The open decks are divided into four separate areas. On the Lower Deck, the swim platform has its own bar area, while the garage, which can accommodate a tender and two jet skis, has a side opening to leave the stern area completely free.

The big bow area on the Upper Deck, furnished with sofas, sun loungers and a Jacuzzi hydromassage tub, when taken together with the extensive Sun Deck and the beach area, all contribute to making sure that the outdoor spaces on the yacht are used to the full.

The interior layout has been designed to accommodate ten guests in five cabins, with an owner’s suite, three double cabins, and a cabin with twin beds plus a third if needed. The crew area can sleep up to seven people.

The hull designed by Pierluigi Ausonio, jointly with the Azimut Benetti Research and Development center, has a wave piercer and combines the benefits of a displacement hull at low speeds with those of a high performance planing hull.

The propulsion system designed by Rolls Royce has made it possible to significantly reduce noise and vibration levels, as well as to improve handling still further. The Azipull Carbon 65 (AZP C65) is a lightweight, high performance, steerable thruster made entirely from carbon fiber, an innovation that has significantly reduced its weight and made it possible to improve the yacht’s layout.

Designed for a nominal output of 2 MW, the AZP C65 is fitted with a fixed pitch pulling propeller pointing towards the bow of the yacht and has two series of conical spiral gears, installed in a mounting structure designed delivers optimum load-carrying capacity in all operating conditions. The propulsion system has hydraulic steering integrated in a compact bearing system and is installed in a specially designed and patented hull structure. An automation and control system has also been developed for it, with Rolls-Royce Marine Common Controls. 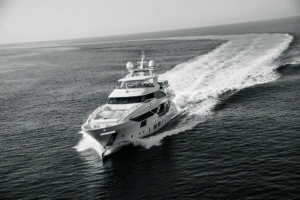 Another benefit of this system is the extremely low level of noise and vibration during navigation. Thanks to the reduced weight of the Azipull unit, the engine room can be positioned further astern, so that the guest cabins are quiet and vibration free. In fact, the Fast 125’ has been granted Comfort Class by Rina, certifying its silence and smooth ride.