Being the evolution of one model and the precursor to another is a bit of a tightrope act. However, Unicorn, the 54-metre Baglietto launched at the end of April, doesn’t seem remotely concerned by her mission and, if anything, seems to be exulting in her role as bridge between past and future. 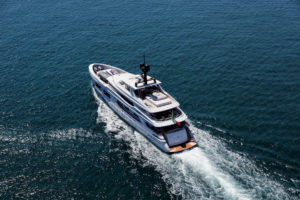 Built for a European couple and penned by Paszkowski Design with naval engineering by Baglietto, Unicorn’s exterior lines give a tantalising taste of what lies in store over the next few months.  “We’ve changed the superstructure by modifying the location of the glazing on the wheelhouse to lengthen the fly and deliver an upper deck with more liveable space,” explains Francesco Paszkowski. “The modifications meant we could put the two tenders forward, freeing up the garage which we’ve converted to a beach area, and we were also able to make room for a potential heli pad forward”.

Spread over four decks, Unicorn can accommodate 10 fortunate individuals in a large master suite and four guest staterooms of which three are VIPs and one a twin.

The interiors, also crafted by Paszkowski Design in collaboration with Margherita Casprini, are a wonderful expression of the lady owner’s tastes and personality as she wished to reflect the tones and richness of the materials used aboard her previous vessel. With that in mind, she consulted Eric Kuster, a Dutch interior designer little known in Italy but very much a celebrity in the rest of Europe. “Initially, the owners chose a project dominated by teak and walnut. A very clean, linear look that’s very much our style,” explains Margherita Casprini, who focuses on interiors at the Paszkowski studio. “But then when we met to see the mock-up, the lady owner confessed that she missed her previous yacht and wanted interiors that would be reminiscent of it.” 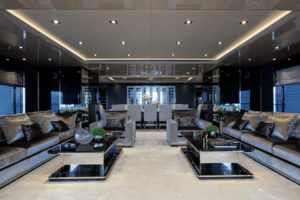 The décor is based on darker tones of the vertical coverings and pale ones of the soles and ceilings. Bulkheads, upholstery, furnishing fabrics and furnishings range from pale grey to black, via pearl and anthracite in a continual interplay of dark elements and brilliant details designed to highlight the latter. Kuster’s hand is clear in the shot velvet  of the sofas (something of a signature of his), the button-tufted ottoman, the seating and the headrests of the beds, all furnishing elements that the Dutch designer designs and has made under his own name. Any elements that didn’t come from his pen (the coffee table, the dining table and the sofas on the fly) were also custom-designed by Paszkowski. 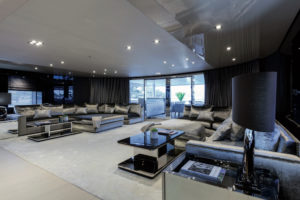 Many of the materials used aboard and designed specifically for this yacht are intriguing too. These include antiqued leather trim for various surfaces, many of the walls and bed bases in the cabins, and the glittering black mosaics used in certain showers. 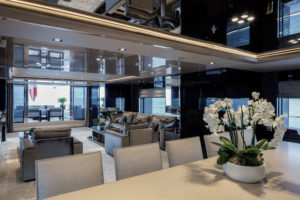 Forward, a large wall wine cabinet acts as a separator between the saloon and foyer with the steel and glass lift that connects the three indoor decks. 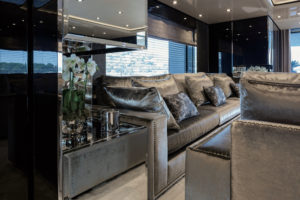 The master suite lies forward on the main deck and feels strikingly spacious. A large circular relaxation zone in button-tufted shot velvet is another impressive feature and affords delicious sea views. The master bathroom is finished in sumptuous black Marquinia marble and features both a large tub and a steam/rain forest shower. 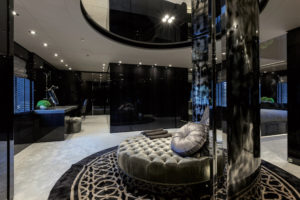 The VIP and twin cabins on the lower deck reflect the opulent décor of the rest of the yacht and the master suite, and also feature classic Philippe Starck diamond-finish mirrors.

The sky lounge on the upper deck too continues the same design ethic as its lower counterparts and is almost entirely taken up by a home cinema which itself centres around a large flat screen TV mounted on its middle wall.

Last but not least, the sun deck spans an impressive 130 square metres, making it absolutely ideal for parties. There’s even a large pool with hydromassage, dining area for 12, sofas and sun pads for chilling and sunning on. 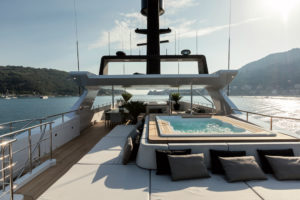 We also love the beach area, which can also be accessed from the main deck, and features a gym and steam room area. Once again, this can double as a party area. 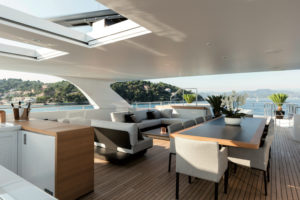 Powered by a pair of Caterpillar engines, Unicorn make a speed of 16 knots at full throttle.