The new book “Sparkman & Stephens Swan – A Legend”, is the history of the Swan yachts built by the Finnish shipyard Nautor and designed by the American design office of Sparkman and Stephens and it is the only work of its kind, created by the founder of the S&S Swan Association Matteo Salamon, all proceeds from its sales will be devolved to charity.

The book recounts the history and secrets of one of the most famous brands of boats in the world. These yachts, often known as the “Bentley’s of the Sea”, were built by Finland’s Nautor shipyard, founded in 1966 by Pekka Koskenkylä and now owned by the fashion tycoon Leonardo Ferragamo. The volume “Sparkman & Stephens Swan – A Legend” was written by Matteo Salamon, owner of the fine-art gallery of the same name and founder of the S&S Swan Association, an international group that unites all the owners and fans of these boats. After ten years of research the book is now in printing, and can be considered the most definitive volume on the S&S Swans. The proceeds from the sales of the book will be entirely devolved to charities that assist infants and adolescents. 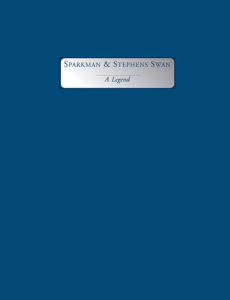 ALL THE WORLD’S S&S SWANS

The lines plans (published for the first time anywhere), deck and sail plans, the most beautiful images of S&S Swans cruising and racing taken by Carlo Borlenghi, James Robinson Taylor and other yachting photographers, the drawings by marine artist Luca Ferron, and much more. The list of all the S&S Swans from their original papers, text by experts such as Juan Corradi, Daniele Fuà, Matti Waris, honorary president Pekka Koskenkylä and above all by Lars Ström, alias “The Professor”, ex director of technical engineering at Nautor who was directly involved in all the details of their construction since 1972. This 288 page bible for S&S Swans is a must to have on board and in the clubhouse. A useful source of information for brokers and shipyards to consult when selling or refitting an S&S Swan, certain of finding all the details and characteristics of all the models. This prestigious and authoritative volume is destined to become a cult in the nautical world.

Ten chapters follow the preface by Matteo Salamon, from the birth of the Swans to the fifty year history of the yard and include interviews with several of the characters that made this such a great brand. A section  is dedicated exclusively to Roderick ‘Rod’ Stephens (1909-1995), president of one of the most important design studios in the world founded in 1929 by his brother Olin Stephens, one of the most influential designers of the 20th century, together with the broker Drake Sparkman. The book also includes the list of all the original names of the S&S Swans that left the yard and a series of technical articles that show how unique the sailboats are. For each of the 15 different models we have the number of hulls built, the production years and a short history. A detailed info-sheet also includes sail measurements and the yacht’s rating when racing. The design, deck and accommodation plans complete the description, from the  smallest S&S Swan at 36’ (10.91 m) to the largest, the S&S Swan 76’ (23.26 m). The text is in English, considering the book’s international market. 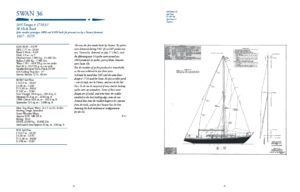 HOW TO RESERVE A COPY

Printed in a limited edition of 1,000 copies, the book is available by contacting the S&S Swan Association at   www.classicswan.org

The printing of a second edition is not foreseen.