Farewell Mr. Riva, and enjoy the sea in your last voyage towards the horizon. The world of yachting throughout the world bids an emotional farewell to Mr. Carlo Riva, who passed away today in his home town of Sarnico at the age of 95. 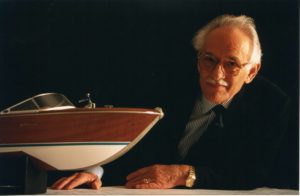 Just four letters epitomize the history, the legend, the technology and the appeal of Italian made yachts. The history of a family and of an extraordinary man, the legend of a whole era that saw the launching of Italian design onto the world stage, from the days of “La Dolce Vita” through to the present day.  An ongoing technological evolution which has always been the hallmark of the boats crafted in the Riva boatyards: from the timeless charm of traditional wood to state-of-the-art fibreglass and steel. Masterpieces conceived, designed, built and inspired by the genius and style of a unique man who has become a legend.

“Carlo Riva has left us, the greatest of them all. The world has lost a brilliant creator of boats, a master of style, a giant in Italy’s industrial and business history. To me, this is a personal loss of a master, an example of brilliance, of commitment and of dedication to work”, has commented Alberto Galassi, the Ferretti Group’s Chief Executive Officer. “Carlo Riva taught us all the meaning of vision, creativity and passion. His vision and inexhaustible innovative energy make him the leading personality in the 20th century yachting world, a man whose extraordinary creations have already become legends. Carlo Riva’s boats will always be the finest in the world, a source of inspiration to all of us who feel a strong sense of responsibility for the stewardship of and for taking forward into the future the leading brand in world yachting.”

Carlo RivaMr. Riva was not just one of the most internationally esteemed and renowned entrepreneurs in the pleasure craft industry. His innovations and creations have left an indelible mark in the history of lifestyle and design, making Riva the most famous boatyard of all times and a symbol of Italy’s productiveness and creative genius. 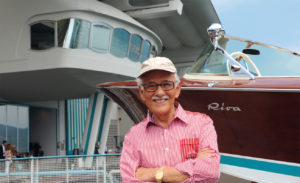 Born in Sarnico on the 24th February 1922, during the golden era of motorboating, when the first speedboats were being built, he was driven from a very early age by a boundless passion for boats and for working in boatyards. He joined the family business when still very young, following in the footsteps of his father Serafino, his grandfather Ernesto and his great-grandfather Pietro, who founded the company in 1842. 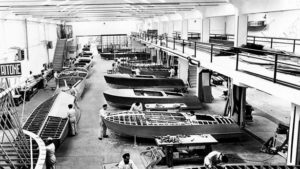 In 1954, Carlo opened the new, futuristic shipyard – which is still protected by the Italian Superintendence for Artistic and Architectural Heritage – and organized it based on an innovative production structure. During that same period he transformed the very idea of the boat, turning it from a transport vehicle for goods and passengers or a racing powerboat to an object of pleasure and luxury, and creating a unique product in terms of aesthetic and functional qualities, elegance and attention to detail. 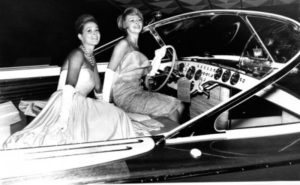 Carlo is the creator of Riva’s golden age, the Master shipbuilder who transformed the brand and its boats into a status symbol, thanks to models like Ariston, Tritone, Sebino and Florida, through to the “legendary” Aquarama, unveiled in 1962. These boats became the objects of desire for aristocrats, actors, sporting champions, businessmen and all kinds of celebrities. They notably included Sophia Loren, Brigitte Bardot, Liz Taylor, Sean Connery, Jean Paul Belmondo, Richard Burton and Jackie Stewart, to name a few. As well as royalty, princes and sheiks from every corner of the world.

In the 50s and 60s, during Italy’s industrial reconstruction and “economic miracle” driven by a fascination for speed and racing cars, Carlo Riva grasped the spirit of the age and created boats in wood with an unmistakable design. These nautical masterpieces immediately distinguished themselves for the fine materials, meticulous attention to detail and craftsmanship with which they were created.

The first of these was the Ariston, about which Carlo Riva said: “It was designed with love and is strong and pure like a thoroughbred horse. Unforgettable! My Lord of the seas.” This luxury “sea car”, the forefather of motorboats to come, was followed by the Tritone, the first twin-engine boat. Then came the Sebino, which ushered in standard production, and the Florida, whose name is a tribute to the United States and to the magic of that state.

The yachts created under Carlo Riva’s direction have all been inspired by an idea which anticipated demand, launching a new fashion which is always the result of a research in design and construction which always makes all the difference. In 1962, with the production of the Aquarama, Riva became the foremost and iconic boatyard in the yachting world. 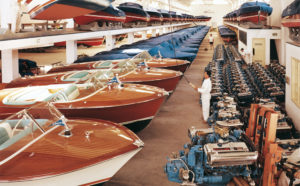 Some 21 of these boats were sold during the first year of production, and a year later the Super version was brought out. The Aquarama remained in production until the 90s, and the last one made, the #784, is still housed in the museum of the Boatyard, in Sarnico.

Carlo Riva showed entrepreneurial foresight yet again in 1969, when he created the first fibreglass boat, demonstrating his great capacity for innovation while at the same time preserving traditional values. His unique and inexhaustible entrepreneurial spirit comes through not just from the boats he made but also from his ability to predict needs and opportunities. 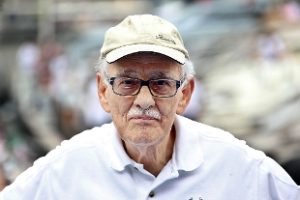 Anticipating the needs of yacht owners he in fact designed the Riva Boat Service, to provide technical and sales assistance. Having left the shipyard in 1972, the focus of his interests shifted to the International Tourist Port of Rapallo, which was dedicated to him on 25 July 1975 and bears his name since that day. In 2005, in Monaco, his “best-loved home” on the French Riviera, Carlo Riva was conferred the title of “Personnalité de la Mer” by Prince Albert II of Monaco.

Carlo Riva has always been there to give advice, help and support to the Riva Boatyards: it is with great emotion that we remember his presence last spring at the launch of Rivamare, the latest masterpiece from the Sarnico boatyards. Carlo Riva died peacefully in his home town of Sarnico on 10 April 2017, perhaps, as he himself used to say, “With a touch of nostalgia in reliving the long ride of my wonderful life as a boatman”.