With a name like Cloud 9, it’s hardly surprising that this spectacular 74m from CRN dominated the last Monaco Yacht Show. 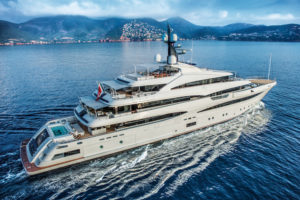 Spread over five decks and one sub-deck, Cloud 9 showcases truly imposing volumes that lend her a sense of extreme dynamism. The ever-reliable Studio Zuccon International Project has crafted a system of effortlessly balanced lines that imbue her with a sleek, aerodynamic beauty.

A little bit of subterfuge on the designers’ part also adds to the impression: the superstructure’s surfaces angle inward as it rises, lightening the volumes without detracting in the slightest from the yacht’s imposing stance. 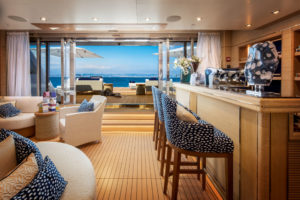 “It was only when she was actually being launched that I realised just how much more aesthetically striking she was than we had envisaged at the design stage,” explains architect Gianni Zuccon, adding:“I think that’s one of the biggest compliments you can give a boat”. 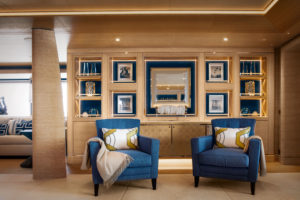 Unfolding from its modern yet timeless exterior design, Cloud 9’s layout seems purposely crafted to ensure that her guests enjoy both the boat and sea in complete freedom.

She also brims with technology – its presence, although pervasive, is subtle and cleverly hidden from view. 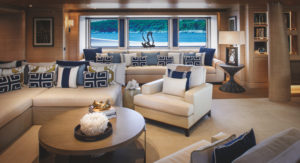 All the onboard audio, video, entertainment and lighting systems, for example, were custom-created by Videoworks and integrated into structures and furnishings. 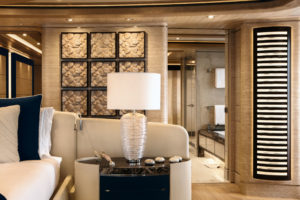 Cloud 9’s Revolution Acoustics SSP6 speakers will vibrate any surface they are installed into and unleash a three-dimensional sound that is equalised by a DPS audio processor to suit the particular space and even the surrounding material. 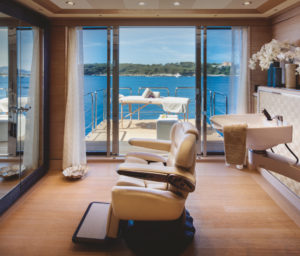 Videoworks is also responsible for the comprehensive onboard security, bandwidth management and server farm systems which can be remotely controlled. Many and varied solutions allow clients to control navigation speed, fuel consumption as well as to enjoy the full potential of the entertainment systems.

The interiors and guest areas are the work of Winch Design. One of the main access is on the lower deck, where a teak-panelled lounge with wave-like inlays has been thought to create a sense of continuity between exterior and interior. 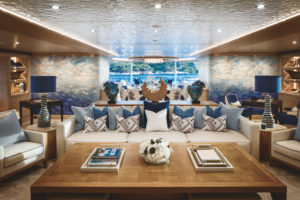 On the same deck are also the galley, the crew quarters and two garages, of which the portside garage opens onto a 25sqm sea-level platform. 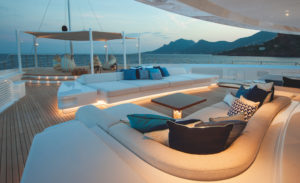 The beach club of over 60 sqm extends from the transom, that becomes a large lounge area of 100 sqm including the interior bar and the living area. Upstairs, the main deck hosts a large open-plan saloon to the stern and six guest cabins.

The day and night quarters are separated by a spa area with a terrace. The upper deck is comprised of the very versatile dining area, creating a unique large area with the panoramic saloon, designed to give guests an indoor-outdoor experience, thanks to sliding glass doors that open up 120°. The VIP suite has a majestic sweep of opening glass at the side too. 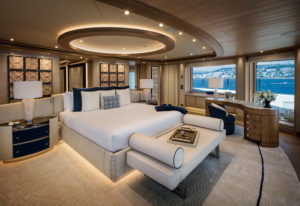 The wheelhouse is flanked by the captain’s cabin cabin, a forward lounge area with sofas and a relaxation space that can be shaded from the sun by a bimini top.

One of Cloud 9’s most delightful and attractive features is her fourth deck: a massive 400 sqm of space dedicated entirely to the owner and complete with multimedia room and private terrace. The sun deck is really the only traditional deck aboard, with conventional sun beds and Jacuzzi. 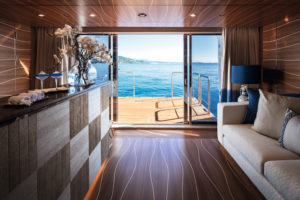 All of Cloud 9’s interiors are awash with oak, in various finishes and colours. Warm neutrals have been selected for the furnishings on all decks with touches of navy blue lifting them. 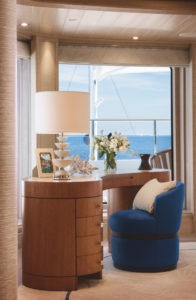 The detailing is exclusive but never showy, with striking artwork on display.  Particularly beautiful are the 3D porcelain panel by Fenella Elms above the sofa in the saloon and the two Vortex sculptures by Tim Royall that flank it. 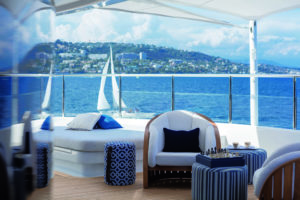 And what to say about of the fresco adorning the two aft walls on the upper deck, depicting dreamy skies filled with puffy clouds? Or the bas-relief decoration with its leaf motif in the ower suite? Cloud 9 is a very special, exclusive yacht. But she doesn’t shout about it. 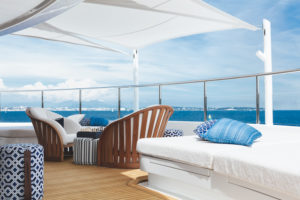 The only exceptions being the Star Wars character name plates on the cabin doors. Such is the owner’s passion for the saga that the triumphant notes of George Lucas masterpiece’s theme song were even used for Cloud 9’s launch. A day when her owner’s family surely was on cloud nine.