At the opening evening of the 2018 Boot Düsseldorf, the jury for the “European Yacht of the Year” Award announced the winners for 2018. 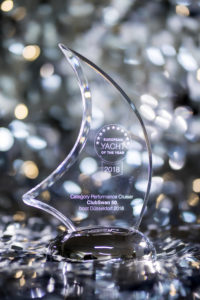 Now in its 15th year, the European Yacht of the Year is the most comprehensive awards programme for new production yachts. Twelve judges, representing all the main European nautical magazines, appraised each of the nominated yachts during the autumn of 2017.

The ClubSwan 50 triumphed as the best Performance-Cruiser yacht.
“We are very proud of this achievement, that is coming soon after SAIL Magazine’s 2018 Best Boats Award that was awarded in the United States.  With twenty ClubSwan 50’s in water and a complete 2018 calendar of racing (The Nation Trophy Leagues in Med, US and Asia) our Swan One Design Division is now a reality.” Commented Sebastiano Fanizza, Nautor’s Swan Commercial Director.

The ClubSwan 50 is the result of an impressive development program. Designed by the renowned Juan Kouyoumdjian, the ClubSwan 50 boasts pre-preg carbon construction, a sexy low-freeboard hull with a dramatic reverse destroyer bow, an integral bowsprit, reverse sheer, distinctive chines and concave aft sections with lots of topside flare. The interiors are well conceived with contemporary modular furniture for an easy conversion from cruising to racing mode. The owner’s stateroom forward, for example, becomes a sail locker, while the settees become over-and-under racing berths.

The great success of the first edition of The Nations Trophy, where twenty-eight Swan One Design, ClubSwan 50, ClubSwan 42 and Swan 45, raced to win the ambitious Trophy, has introduced the new era of the Nautor’s Swan racing soul.

2018 sees the launch of The Nations Trophy Mediterranean League. Opening with the inaugural Monaco Swan One Design, organized with the Yacht Club de Monaco, this first event will offer a fantastic 4-day programme of high-end racing and social occasions.

The Mediterranean League will continue with some classic Med rendezvous: SailRacing Palmavela, organized in early May by the RCNP in Palma de Mallorca; the Giraglia Rolex Cup, organized in mid-June by the YCI and featuring dedicated windward-leeward races off Saint-Tropez along with a special prize for the Offshore race; and closing in Palma de Mallorca at the beginning of August with the legendary Copa del Rey also organized by RCNP. 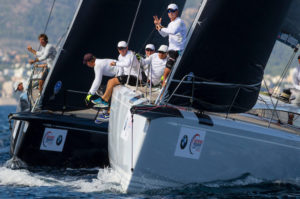 The prize giving for TNT Mediterranean League will be in Porto Cervo during the 20th edition of the Rolex Swan Cup scheduled for 9th – 16th September 2018.
In parallel, two additional ‘The Nations Trophy Leagues’ will be organized in Asia and US waters.