She still doesn’t have a name because she was built on spec and is still awaiting the right owner. But the fifth addition to Codecasa’s Vintage series – a 43-metre – is ready to splash. 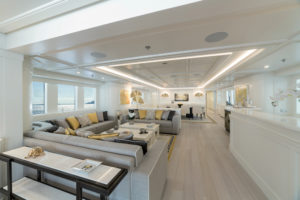 Like her four siblings (the 42-metres Magari from 2011 and Libra from 2013, the 50-metre Gazzella of 2015 and the 43-metre F76 of 2016), C122, as she is known in the yard, is clean and elegant of design with exterior lines so simple that they will bring a smile to the lips of both modern yacht fans and more conservative types who like their vessels timelessly beautiful. And that really is the secret to the success of this series: the yachts are classics in the making yet modern at once and guarantee unparalleled quality. 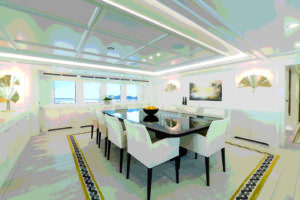 But then quality is a given because this is a Codecasa after all. The mere fact that this vessel was built on spec for the ultra-competitive megayacht market also speak volumes about the yard’s confidence in the series. 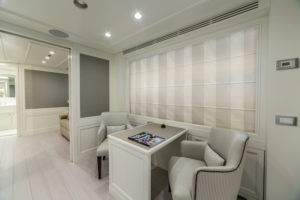 The project was developed entirely in-house by Codecasa’s own technicians and architects yielding a high-resistance steel hull and an aluminium superstructure clothed in a breathtakingly-elegant grey livery with metallic accents. 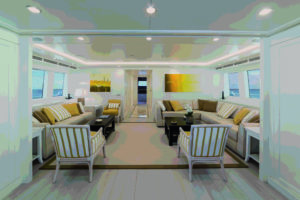 The four-decker C122 was designed for long cruises with friends and family – there are 12 guest berths with room for nine crew too. 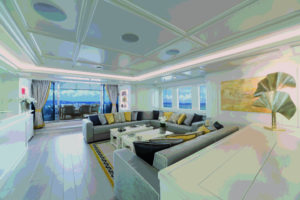 Guests are welcomed aboard the main deck by a large al fresco conversation area featuring blonde wood sofas. In the interior, the space is divided into two separate areas with a large galley between them on the port side. Aft, just inside the entrance, is a living area with a custom-designed C-shaped sofa arrangement, a bar and a dining area that sits up to 12.

The leitmotif in this area is the limed oak flooring which is combined with textiles, rugs and upholstery in various shades of ivory, yellow and grey by Chivasso, Jab, Jim Thomson and Robert Allen. The living and dining areas are separated by a low unit designed and built by the yard which hides a double TV screen to allow viewing from both sides. 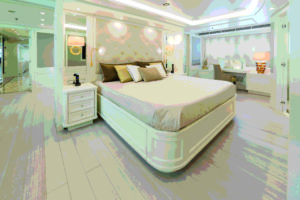 Amidships is a lobby the luxe Calacatta marble, quartzite, honey-coloured onyx and cream Amalfi marble floor in this area also reappears on all the decks. Opening off it is a day toilet and the owner’s quarters forward. 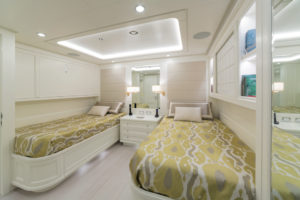 There is a small office area just inside the entrance to the owner’s suite which also contains two separate dressing rooms and an enormous double bathroom with Calacatta marble tops, floors and walls. The colours are similar to those in the rest of the boat and so the flooring is limed oak with ivory-hued furnishings and walls.  The fabrics and textiles – all muted neutrals with touches of dove grey and gold – are by Dedar, Designers Guild, Harlequin, Christian Fishbaler, Larsen and Beacon Hill. Another signature is the subtly tufted leather Nuvola headrest by Penelopeoggi. 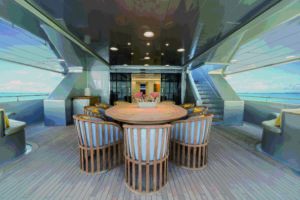 Guests are accommodated on the lower deck where there are two double cabins and two twins with third Pullman bunks. Once again the floors are limed oak to match the white of the wainscoting and ceilings.  Palissandro marble with quartzite inserts was chosen for the bathrooms. The captain’s cabin and the bridge are on the upper deck which also has a small colourful lounge. 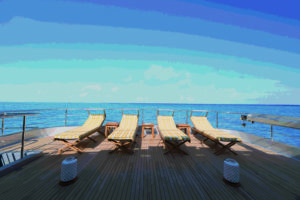 The sun deck brings this virtual tour of the Codecasa Vintage C122 to an end but really is the sum of all her exterior spaces.  As there is already an al fresco dining area on the upper deck, the sun deck is devoted entirely to sunbathing and chilling out – it even has a large Jacuzzi forward.   The Portuguese bridge, on the other hand, has a forward-facing sofa that provides a lovely secluded place to relax even in port. 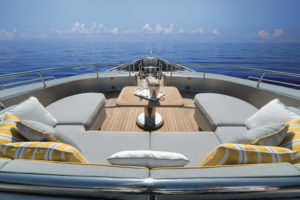 Powered by twin 1650 hp Caterpillar engines that spin at 1,800 rpm, the new Codecasa can make a red-line speed of 16.5 knots in light displacement mode and has a range of 4,000 nautical miles at 11 knots. With a GT of under 500 tonnes, she also has the full complement of safety and regulatory certifications for complete peace of mind: Lloyd Register Maltese Cross 100 A1 SSC, Yacht, Mono G6- Maltese Cross LMC UN as well as MCA LY3 (Full Compliance Unrestricted).