There is no point is asking Fabio Mazzeo for a quick definition of what design means to him. We tried but it only took a second for his mind to fly off on a tangent and, after that, there was no stopping him. His notion of design is part of a cultural context so broad that it would be impossible to sum it up in a single phrase. 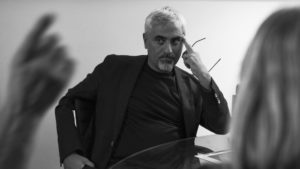 In 2008, the 52-year-old Mazzeo joined forces with Vito Taddei to open Exclusiva Design, which works in both architecture and design, straddling two worlds at once. Intriguingly, it is also a company that flanks its clients from the very first design sketches to handover. In fact, it will even go so far as choosing the bed and table linen. How many Italian architecture firms were founded by an architect and a manager? That fact alone says a lot about the philosophy that drives these two gentlemen. 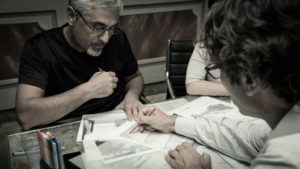 “Technically speaking, we are a company and not an architecture studio. And so that is why we are not slotted into the latter category,” explains Mazzeo. “If we were officially an architecture studio, we’d be one of the top players in terms of revenues.” Exclusiva Design now employs a staff of 60, 45 of whom are architects, designers or creatives with the other 15   working full-time on development and project management. “More than a structure, this is a community of different souls (Mazzeo actually used the word ‘anima’ meaning soul rather than people, ed.’s note) with every one of us using our skills in the service of our clients,” he explains. Oftentimes, those clients actually come to Rome to Exclusiva headquarters rather than flying the architects out to them which is more the norm for busy, high-profile individuals. 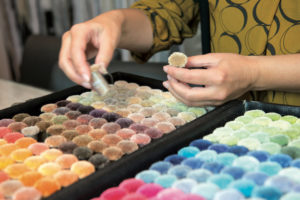 “As far as we are concerned the client is part of the team,” says Fabio Mazzeo. “More and more these days they are coming to meet us here in Rome to be able to play around in what we call the playroom which is a samples room where they can really let rip with forms and colours. It’s all part of the game: creating is liberating and it has to make people happy,” he adds.

Therein lies the secret of Exclusiva’s success. And what a success: in under a decade it has mushroomed from a small company to spearheading a whole new interpretation of architecture, design and living.

“Design is a way of understanding and, in our case, it is a time of listening because our real job is to make our clients’ habits more comfortable without them even noticing. I escaped from the style trap years ago. I want Exclusiva to be remembered for its approach not its style. Design is an experiential adventure,” Mazzeo says, finally giving us that illusive definition.

For Mazzeo and his community, architecture has to be subjective. Architect and designer are tailors of sorts and must craft whatever they are designing – be it a house, an office or a boat – around the needs and dreams of their clients.  Every home Exclusiva designs is different  because every owner is different too. The only common denominator is the company’s penchant for using Italian craftspeople and artisans.

“In our country, we have incredible craftspeople. I could never work without them. But unfortunately we are losing some of the manual skills because you need a cultural approach to making furniture. That is why we created the Fondazione Exclusiva – to protect those skills, spread them around and help young people,” he says.

Skilled craftspeople are one of the focal points of another of the principles that guide Mazzeo and his team in their work: a tactile, textural approach.

“In our concept of design, we prefer to focus on tactility, on using different, emotive materials that are tactile not just to the hands but also textural to the eye. Alternating rough and crafted materials can yield incredible effects that are enough to create a leitmotif for a space by themselves,” he concludes.

Exclusiva’s approach has grown legs thanks to great word-of-mouth and launched the company into the stratosphere, turning Fabio Mazzeo and Vito Taddei into artistic mentors to the powerful individuals that have commissioned the company to design not just their villas and apartments but also company headquarters, Gazprom and Ferrari being just two examples.
But genius and creativity demand constant stimulus too and Mazzeo was quick to say yes when Tankoa approached him to design a 72m that was a major departure from the sterile styling exercises the superyacht world has inured us to in recent years.

Bolide, as the project is named, does something much more important than sweeping aside conventional yacht styling cues. It actually revolutionises (on paper at least) the whole notion of what a yacht is. It is unapologetically futuristic: the glazing aboard seems to meld with the hull itself but its strongest feature is functionality with wonderfully transformable, modular areas. The main pool, for instance, can be covered over to add extra floor space for parties and events. Interior and exterior are designed as a single element too, in terms of style at least. Lastly, Bolide will offer as astonishing 1,500 sqm of space, 600 of which is out on deck.

“There’s a lot of Exclusiva in Bolide,” declares Matteo. And he’s right: the company is there in everything from the philosophy to that happy-making design, the alternating of different textures and materials so that they become part of the décor. Now all they need to do is find an enlightened owner. Maybe one of the tycoons that called in the Roman team for a luxury home and fell in love with the results delivered by a creative dreamer who also has his feet very firmly on the ground.