The success of the Ferretti Yachts 450 goes on, as it continues to grow in popularity among owners and the general public all over the globe. The Ferretti Yachts 450 was presented to the sailing world at the Cannes Yachting Festival 2016 and made its debut in the Asia Pacific region and the United States in recent months. Now it has claimed two awards in a single month, in China and Slovenia. 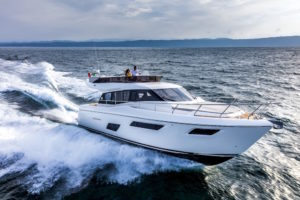 In Asia, where Ferretti Yachts has been the leading name in luxury sailing since years, the accolade came at the Asia Marine & Boating Awards, which took place in late April at the 22nd China International Boat Show 2017 in Shanghai. The Ferretti Yachts 450 was named the Best Motor Yacht below 55ft. The judges praised the qualities that make the new boat unique: graceful style, practical design, unparalleled on-board comfort and a dynamically versatile interior layout.

Another triumph came just a few days later in Europe. At the start of Internautica 2017 – which took place in early May in Marina Portoroz, Slovenia – the Ferretti Yachts 450 came first in the Motor Yacht over 41 up to 50 feet category at the Adriatic Boat of the Year Awards.