Dramatic names have become something of an Ab Yachts tradition. So it’s hardly surprising that the  AB 145 Fast and Furious has been followed up by the new AB 100 Spectre, in honour of the 24th Bond film.  This latest beauty is the maiden example of her class and also the first in a series of new designs in the Fipa Group’s sporty line. 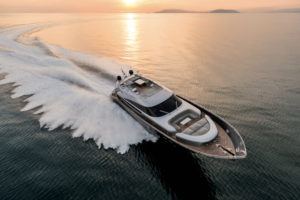 “We needed a model to slot in between the 92 and the 116,” explains  Valeria Guidetti, daughter of Francesco who founded the Fipa Group in 1971 and also head of the yard’s design department.  “A boat that was a slightly newer take on the lines, particularly those of the 92, but still retained our family feeling, and, of course, that reflects the sporty spirit that is part of our DNA”. 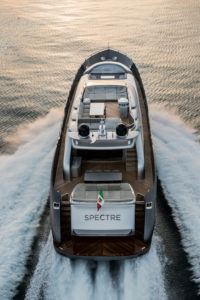 Mission accomplished! Even at the most casual glance, Spectre is very clearly an AB Yachts craft, right down to her astonishing performance figures. Sporting three 1,900 hp Man engines and three MJP water jets, she hits 53 knots at full throttle, an achievement that puts in her the world’s top 10 fastest yachts. 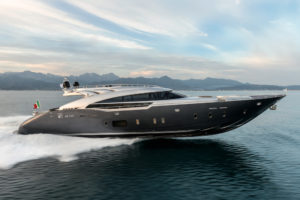 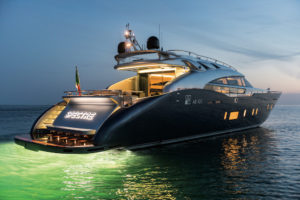 All in all, obtaining such trail-blazing results took an enormous amount of time and effort. The new yachts’ exceptional performance levels are also down to the care the yard lavished on its use of materials. “The construction materials on all the AB Yachts have been lightened to avoid influencing speed,” says Guidetti. “We are constantly researching new products that will help us save on weight yet maintain a superb standard of quality. But we went one step further with the AB 100. We sourced an American product that has an extraordinary weight-quality ratio. It’s a finished material that’s extremely versatile and most suited for doing furniture work that was previously unthinkable”. 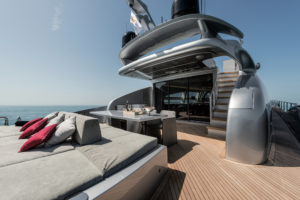 Both the AB 100’s interior and exterior design were crafted by the yard’s own style office. The owners asked for a yacht with bright, light interiors. The result is a take on minimalism that is both warm and welcoming. An almost impossible mission – worthy of 007 himself! 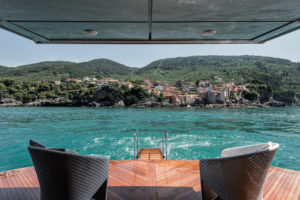 Externally, Spectre is characterised by her two-tone grey hull and superstructure, and by yard signatures such as the three raked grooves in the superstructure. The exterior spaces are very generous indeed and include a large sofa and sun pad area aft and, forward, a sun pad and dinette that guarantee maximum privacy in port, in addition to a flying bridge that has a country-club expansiveness to it. 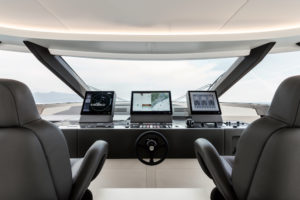 Spectre’s interiors, on the other hand, are a masterclass in the art of balance, achieving the enviable feat of being modern, minimal, functional, warm and cosy all at once. An achievement that amounts to squaring the circle. Dominated by grey and white tones, they accommodate eight guests in four two-berth cabins, one of which is a full-beam owner’s suite aft. 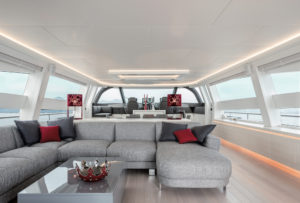 The main deck is home to the helm station and a large saloon with two eight-seater dining areas: one interior and the other on deck. Light wood is used for the bulkheads and furnishings throughout the yacht, lifting, brightening and warming the spaces as well as proving a perfect complement to both the planed oak floors on the main deck and the pearly grey carpeting on the lower one. The fabrics and textiles used aboard are every hue of grey imaginable. This is a stunningly elegant boat that could, however, have tipped into glacial territory had it not been for a few absolutely spot-on choices. These include a B&B Italia sofa that although a chic elegant grey is also comfortingly padded and rounded, and the linear Viabizzuno lamps that, despite their purple-red colour, are romantic touch. 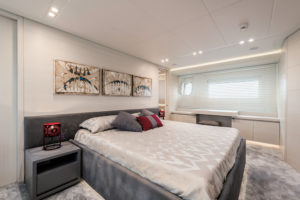 Speaking of which, red is what really lifts this yacht: it’s used for the smaller cushions cleverly scattered on both interior and exterior seating, the artfully-positioned lamps and accessories. These small but vivid splashes of colour might seem insignificant but aboard Spectre make all the difference and, in tandem with the furnishings, transform her into an extremely warm, welcoming craft that even 007 himself could not find fault with.