CCN has started a collaboration with sculptor Francesco Carone for the creation of a work of art combining creativity, the subject of the sea, and Made-in-Italy raw materials.

Spurring the creativity of an artist while metaphorically reiterating the will to create something unique, just like every boat built by CCN: this was the spark that ignited the collaboration between Cerri Cantieri Navali and Francesco Carone, a young, esteemed artist from Siena, who was commissioned to sculpt an original work of art having multiple conceptual meanings and capable of portraying, through the sculptor’s vision, the core elements of CCN’s identity.

Carone’s work of art is a sculpture in absolute white Carrara marble that has the minimal, stylized shape of a hull.  Carone then scattered on the surface of the marble block, in an apparently random way, some natural marine pearls having various sizes to reproduce a sort of constellation – the constant reference for sailors from time immemorial. 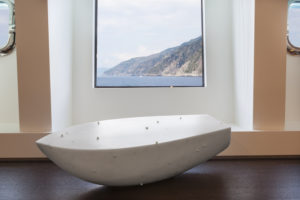 The marble used by the artist comes from the Michelangelo-Barattini quarries in Carrara – the same where Michelangelo Buonarroti selected the marble he used for his magnificent sculptures – and, more than any other materials, epitomizes  the artisanal, artistic and social traditions of Carrara, the area where CCN’s crafts come to life.

Thanks to the similarity of shape between a hull and a shell, as well as the mere fact that both share the function of ‘containing’ and protecting – on the sea and in the sea -, Francesco Carone has breathed life into his own work of art, which harmoniously blends together CCN’s values and the subjects that are normally portrayed by the sculptor.