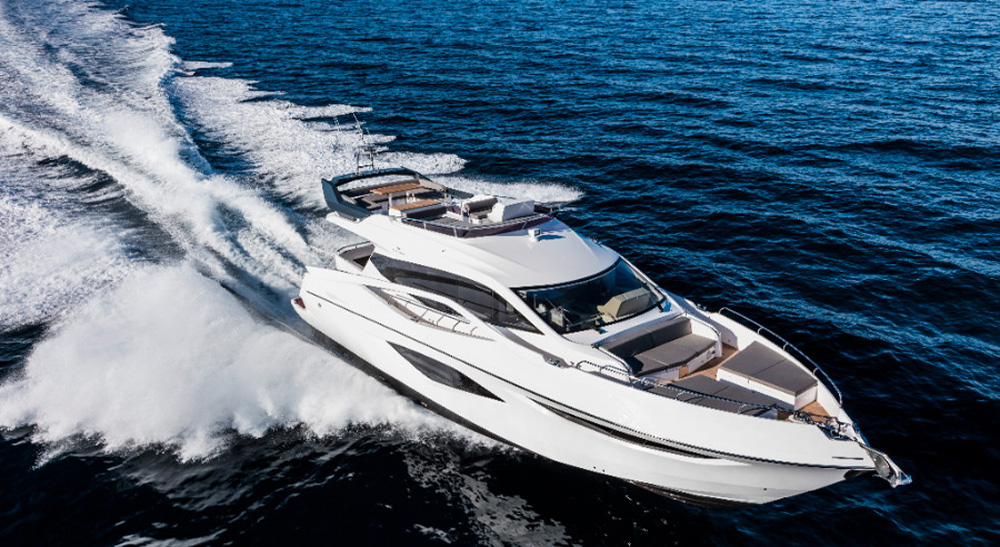 World premier of the brand new Numarine 60 Flybridge at next 2016 Yacht And Brokerage Show in Miami Beach. Three units sold.

5.15 meter beam, the Numarine Flybridge 60 has the same bold styl Following the success of the recent Flybridge and Hardtop 70’s and the 78′ Evolution, Numarine expands their range with the all new 60 Flybridge. Two of three 60’s units are already on water. A hardtop version will be introduced next 2016. Measuring in a 18.4 meters LOA, with a ing common to all the Turkish yard’s family line products, with a sportive design that respects the exceptional onboard space available to the owner. Ample open areas and brightly lit interiors define Numarine’s traditional and characteristic layout.

Flybridge 60 – conceived to have the highest volume in the 60′ category – is drawn by Numarine’s designer Can Yalman, responsible for the concept, lines and interiors. Umberto Tagliavini is the naval architect and Gurit is in charge of the structural engineering. The 60 Flybridge 60 is very competitive thanks to Numarine’s construction techniques where light weight and strength are guaranteed by vacuum infusion composite construction.

With a 35 knots top speed and a 28 knots cruising speed, the use of less powerful engines will keep fuel consumption and maintenance costs down and give the Numarine 60 Flybridge a very competitive price. Comfort and cheer were the guidelines in designing the Numarine Flybridge 60’s internal layout. The three guest cabins all have their own toilet, while close attention was paid to the full beam owner’s suite, with huge windows at water level for a breathtaking view. Omer Malaz, Numarine Owner and CEO adds that “with the Numarine 60 Flybridge we are using an IPS motorization/transmissions. Using IPS is very important in space saving, it allows accommodation space to free up!

Their smaller size frees up considerable space in the engine room, which in turn allows us to increase fuel tank capacity, notably increasing the cruising range. Now she can be considered a real ‘Long Range Cruiser’”. This new model will incisively place Numarine into the 60′ to 70′ market – three orders have already been received for the 60 Flybridge. Hull N°1 and N°2 still delivered.