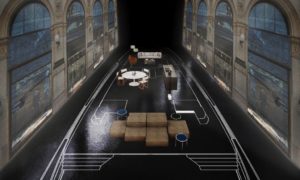 Once again Sanlorenzo will attend the main event in the world of design for the second year in a row with its project “Il mare a Milano: Yachtville” (The sea in Milan: Yachtville) taking place at Milan’s Triennale, from 17th to 22nd of April.

Alongside the participation to FuoriSalone, Sanlorenzo announces the beginning of its collaboration with Piero Lissoni acting as Art Director of the company. The great stylistic and projectual affinitythat has immediately emerged between the designer and the Italian shipyard, which last year resulted in the interior design project for the new motoryacht SX88, culminates today with the decision to start a new experience together that, supported by the company’s expertise, aims at creating new potential scenarios for boating design. A major milestone for the company which once again goes to confirm its well-defined direction that connects it more and more to the world of design.

Loosely based on the scene design adopted by director Lars Von Trier in the film Dogville, where the buildings in a town are shown through a plan view by using graphic two-dimensional delimitations, the installation “Il mare a Milano: Yachtville” displays the groundbreaking interior design project signed by Piero Lissoni for Sanlorenzo’s yacht crossover SX88.

At the exhibition of the Triennale, the silhouette of yacht SX88 is graphically highlighted on the floor through an abstraction of internal areas. The only aspects which emerge from it are the connotative elements of a style, a way of life, where items belonging to furnished settings are theatrically placed: visitors are invited to board the yacht, moving freely from bow to stern inside an area which reproduces the open-space living/dining environment of SX88 through actual furniture items,produced by such internationally-renowned design companies as Boffi, Cassina, Knoll, Living Divani etc, chosen by Piero Lissoni to give the interior design project a domestic vibe.