Ivan Adzic is the new Mangusta Area Manager for France.

“We are proud to announce that Ivan is joining the Mangusta team– says Francesco Frediani, Commercial Director of Overmarine Group – For more than 50 years, the Balducci family has always been ready to face the challenges and to use all the passion needed to overcome them. It is from one of such challenges that the Overmarine Group was born and built the reputation of the Mangusta brand all over the world. Ivan’s contribution will give an excellent boost to the promotion of the Company’s values in France. The values of engineering, design, finishing quality together with the ability to interpret at its best the wish of Owner. The values that allowed us to acquire significant role even in the competitive market of displacement vessels in metal.” 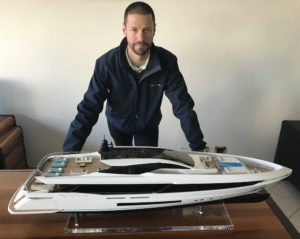 Ivan Adzic shares the same listening values, the same understanding of the needs and support to be provided to the Client, which have always been the central focus of Mangusta’s approach to the market. Among the primary objectives of his role, there is the expansion of the awareness of the brand and of the new product lines in the French market.
The new Area Manager will also coordinate the representative office of the Group at Golfe Juan, in Cote d’Azur. It is one of the reference markets for Mangusta, as demonstrated by the several units present in the most exclusive ports of the region.