In the early 1950s, ENI chairman Enrico Mattei commissioned architect Mario Bacciocchi to design an Agip service station that would embody the incredible wave of dynamism sweeping Italy at the time. Sixty years later, that same station has been given a new lease of life by Lapo Elkann who called in another architect, Michele De Lucchi, to restore it after years of neglect.

Two very different eras but also two entrepreneurial stories that share the same vision of turning Italy into a truly great country. Thanks to Elkann’s efforts, Garage Italia once again brings together the very best of Made in Italy under the same roof. The building’s exterior retains the aerodynamic sleekness inspired by the glorious Streamline Moderne style movement of the first half of the 20th century.

Depending on the angle it is viewed from, the shape of the former service station seems to mimic the deck of ship, the wings of an aeroplane or the flowing lines of a sports car. Earth, sky and sea are recurring themes and actively inspired the vision behind Elkann’s project. The result is that past is in constant, lively dialogue with the present in Garage Italia. “It’s not about rhetoric and it’s not a nostalgia trip either,” he says emphatically. “Garage Italia celebrates the best our nation has to offer using a language that references the Dolce Vita concept.” In other words, it is not a museum but an actual workshop: a laboratory of ideas in which creative talent pays a central role.

The term “Garage” was a very deliberate choice. The high tech likes of Apple, Amazon and Google also started out  as dreams of young men working from their garages.

Then, of course, there is the garage band phenomenon that produced some of the best of modern rock music. But Lapo Elkann personally is following a very different tune. “My garage is designed to be the new home of Italian creativity. A place lit up by the desire to coin an entirely new style that may look to the past but mostly aims to create a better present and future,” he declares. 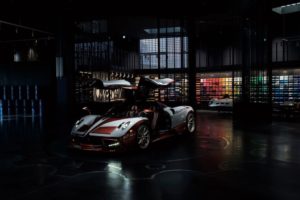 Hence the decision to call this new movement Dolce Vita 4.0.  An intermingling of past and future, tradition and innovation – the core values and keys to the success of the great Made in Italy brands of the likes of  Kartell, Cassina, Poltrona Frau, Brembo, Pirelli, Uno Più, Viabizzuno,  Richard Ginori and Riva, now flanking Garage Italia in its endeavours.  To get an idea of the true breath of Lapo Elkann’s vision, just take a stroll around the spaces themselves.

Terms such as “personalisation” and “tailor-made” take on new meanings and are energised by cross-contamination between seemingly unconnected worlds. Nine Ferrari Daytona and two Ferrari 599 seats have been turned into actual armchairs, for instance, while the legendary 298 De Lucchi director’s chair for Cassina has been personalised with exclusive motorsport-inspired graphics designed by Elkann and the Garage Italia creative team. But that is far from the end of the story. The two-tone leather Frau sofa in the restaurant area, where the menu is in the capable hands of chef Carlo Cracco, is inspired by a Ferrari that once belonged to Gianni Agnelli. The car theme continues with the bodyshell of a Ferrari 250 GTO which has been kitted out as a cocktail station.

The Riva Privé space also melds the automotive and maritime worlds as its styling, materials, décor and colours all clearly hark back to the Aquarama, one of the great iconic models produced by the Bergamo yard which is now part of the Ferretti Group.

“With Garage Italia, we set ourselves the goal of creating and turning into reality the personalisation dreams and desires of a business to business and business to consumer client base. We also work in the industrial design sector,” explains Elkann. Sky, land and sea set the coordinates and scope of Garage Italia’s work.

But that is no coincidence.“hey were the central elements in an advertising campaign my great-great-grandfather (Fiat founder Giovanni Agnelli Senior, ed.’s note) commissioned for Fiat and which, in my own small way, I wanted to pick up on in getting this project off the ground,” continues Elkann, adding: “This is a style centre, not a fashion centre. Equally I don’t look on myself as a fashion entrepreneur but as one that works with style.”  We might also add that Elkann is an exporter of creativity which brings us neatly to his work with Hublot and Italia Independent, a partnership that has produced timepiece collections that shine a bright light on his talent for innovation finding unusual, cutting-edge materials and putting them to new uses. One example is Texalium which was used to produce a version of Hublot’s iconic Big Bang watch. 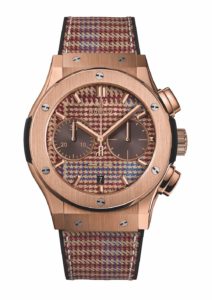 At the other end of the spectrum is the 2018 Classic Fusion Chronograph Italia Independent, collection spanning three very elegant limited edition watch models featuring 1960s and 70s fabrics on their dials which Elkann himself selected from the archives of the celebrated Italian tailor Rubinacci.

But what about the maritime world? “There is still a lot of work to be done there,” says the entrepreneur. “Very few have had the courage to instigate change in the sector. But Luca Bassani is one. I have great respect and admiration for what he has managed to achieve in both the sailing and motor arenas.” 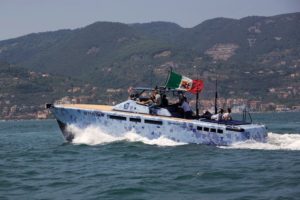