“Wally has always been about innovation, about combining the latest technology with contemporary design, and about constantly looking at ways to enhance the on-the-water experience through performance, comfort and style,” says Luca Bassani, founder of the iconic Monegasque brand. 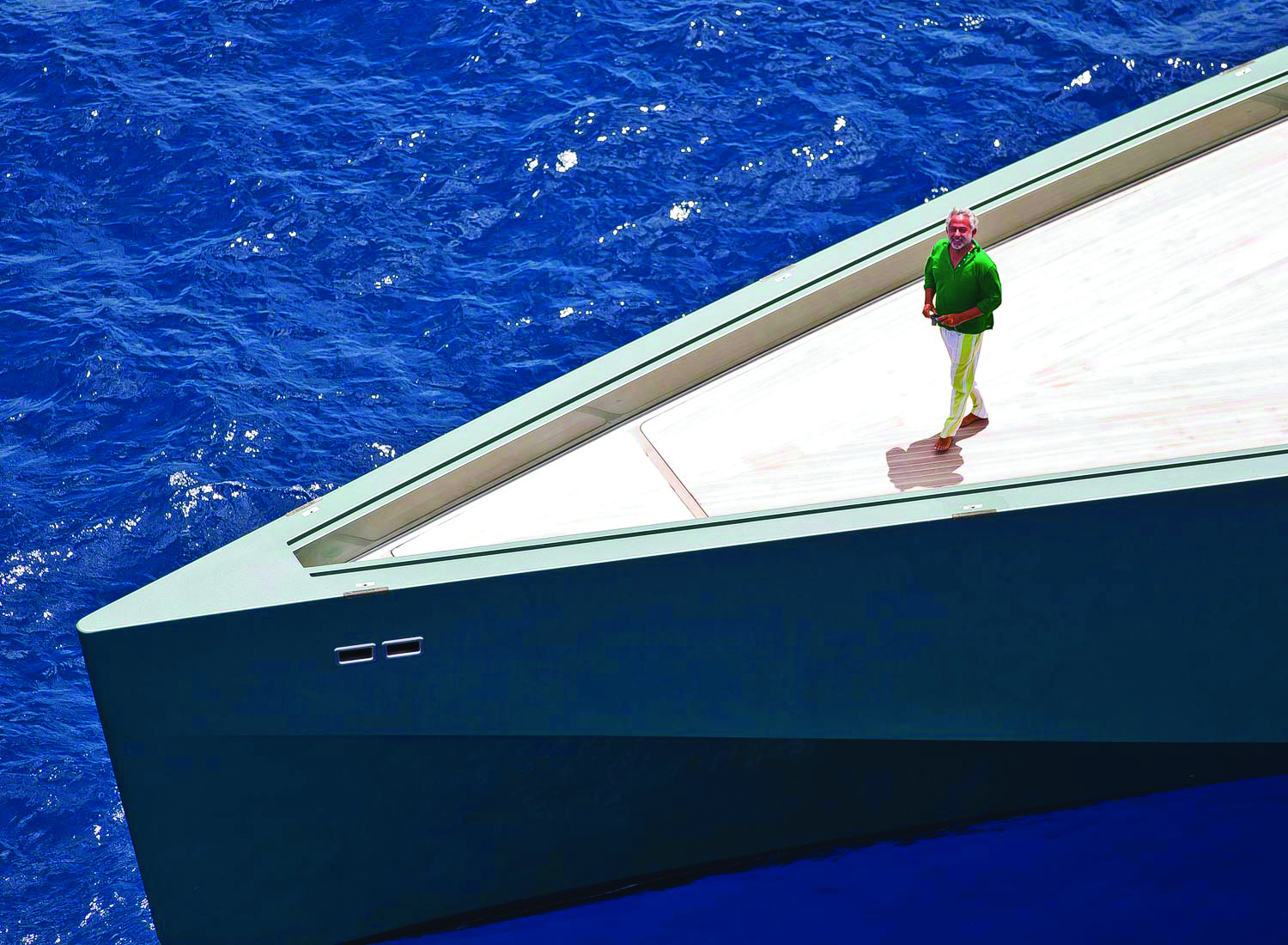 In fact, since he founded the brand in 1994, Wally has pioneered groundbreaking solutions that have transformed technologies and aesthetics to the extent that today it is hard to identify any aspect of large yacht design, sail or power, that has not been influenced by his creative vision. They say imitation is the sincerest form of flattery and many Wally innovations – from the early use of carbon fibre to the concept of easy sailing and folding bulwarks – have been widely adopted by other boat builders. 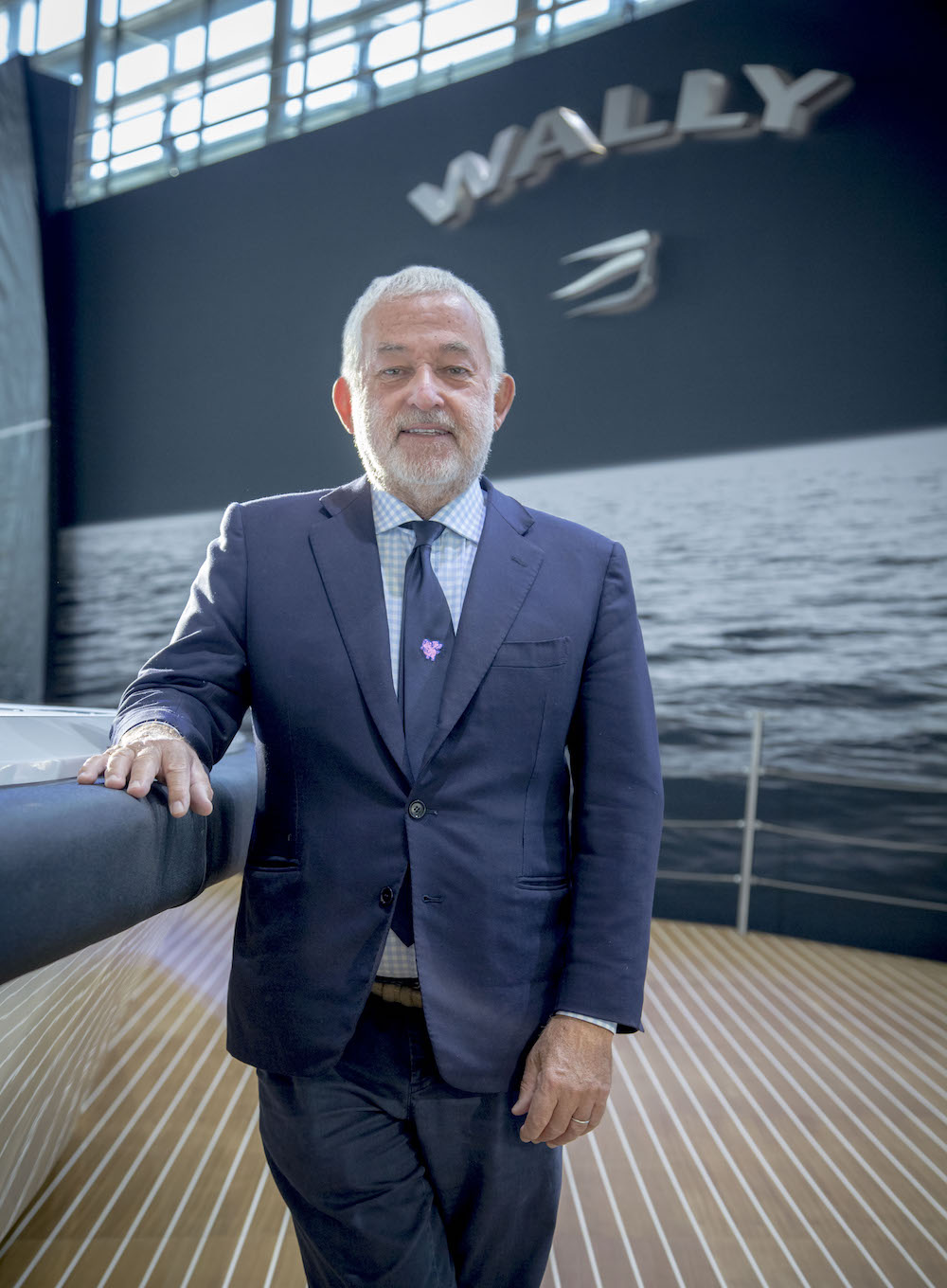 Instrumental in continuing Luca Bassani’s unique way of thinking is the recent partnership with Ferretti Group. “The market today requires significant investment to develop new products and new markets,” said Bassani at the official announcement during Boot Düsseldorf. “Ferretti Group has great industrial, organisational and commercial capabilities and will be able to boost Wally. I will continue my design and development activity on an exclusive basis, ensuring the continuity of Wally’s DNA.”

At the German Superyacht Conference that took place in Hamburg Luca Bassani presentedthe story of Wally, depicting the innovations that became brand hallmarks and influenced the entire yachting industry.

Everything from bicycle frames to champagne bottles is made of carbon fibre nowadays, but that was not the case in 1991 when Bassani launched his own 25m sloop Wallygator (now Wally One). 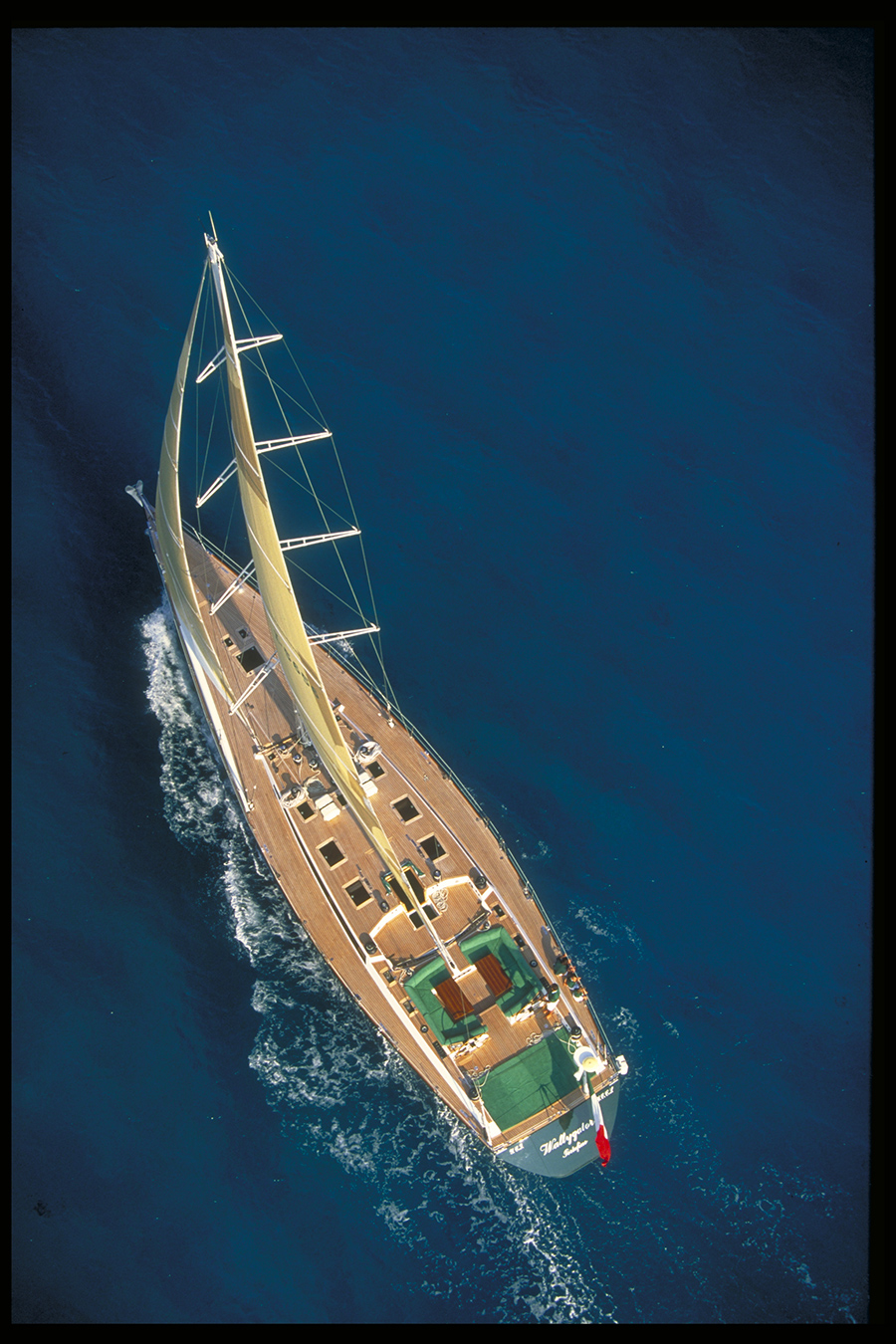 Her carbon composite hull and full carbon mast were complete novelties in boating at the time and were inspired by the New Zealand challenger KZ-1, the first big yacht with a full carbon mast, in the 1988 America’s Cup. 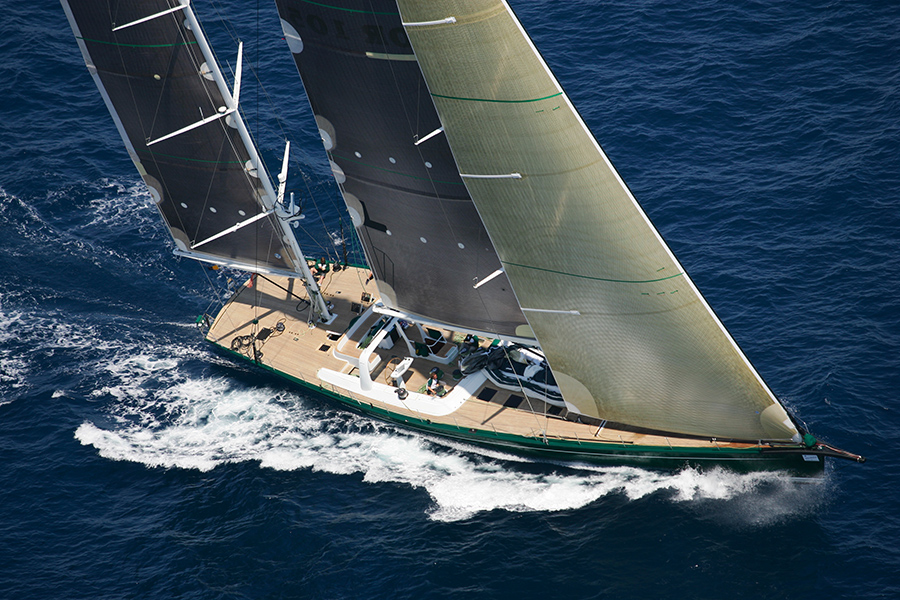 In 1994, Wallygator II (now Nariida) even had carbon fibre sails long before 3DL arrived on the scene. Since then, Wally has been at the forefront of developments in carbon composite construction and when 50.5m Better Place was launched in 2012 she was the largest carbon fibre sloop in the world (and the first RINA Green Star sailing yacht).

Wallygator was both the catalyst and prototype for many developments that are now commonplace. 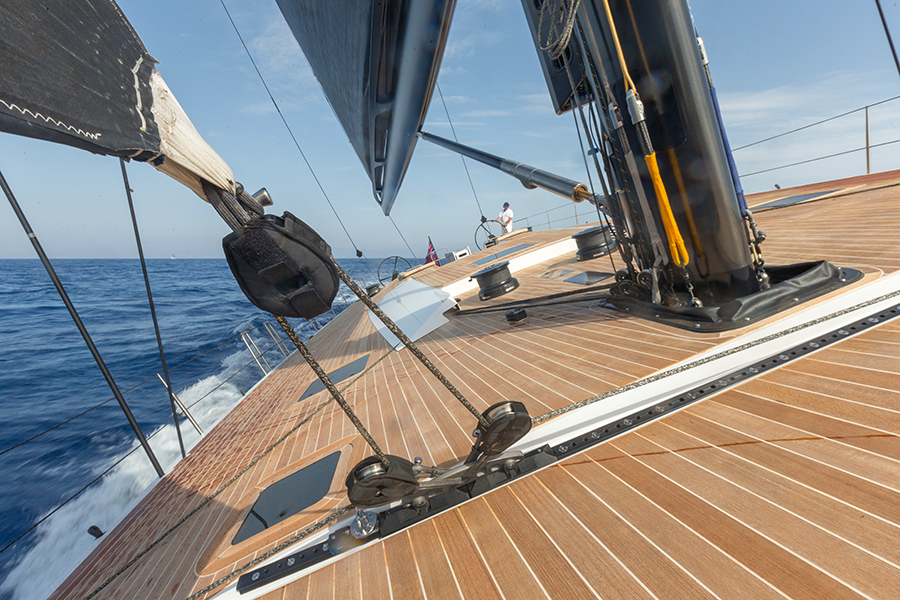 These included simplifying the sailing systems with a self-tacking jib, swept-back spreaders and no running backstays.

Wally took the easy sailing concept a step further with a push-button system for trimming the sails on Wallygator II, and again in 1998 with Tiketitan and Slingshot (now Itaca), which were the first yachts equipped with Magic Trim. 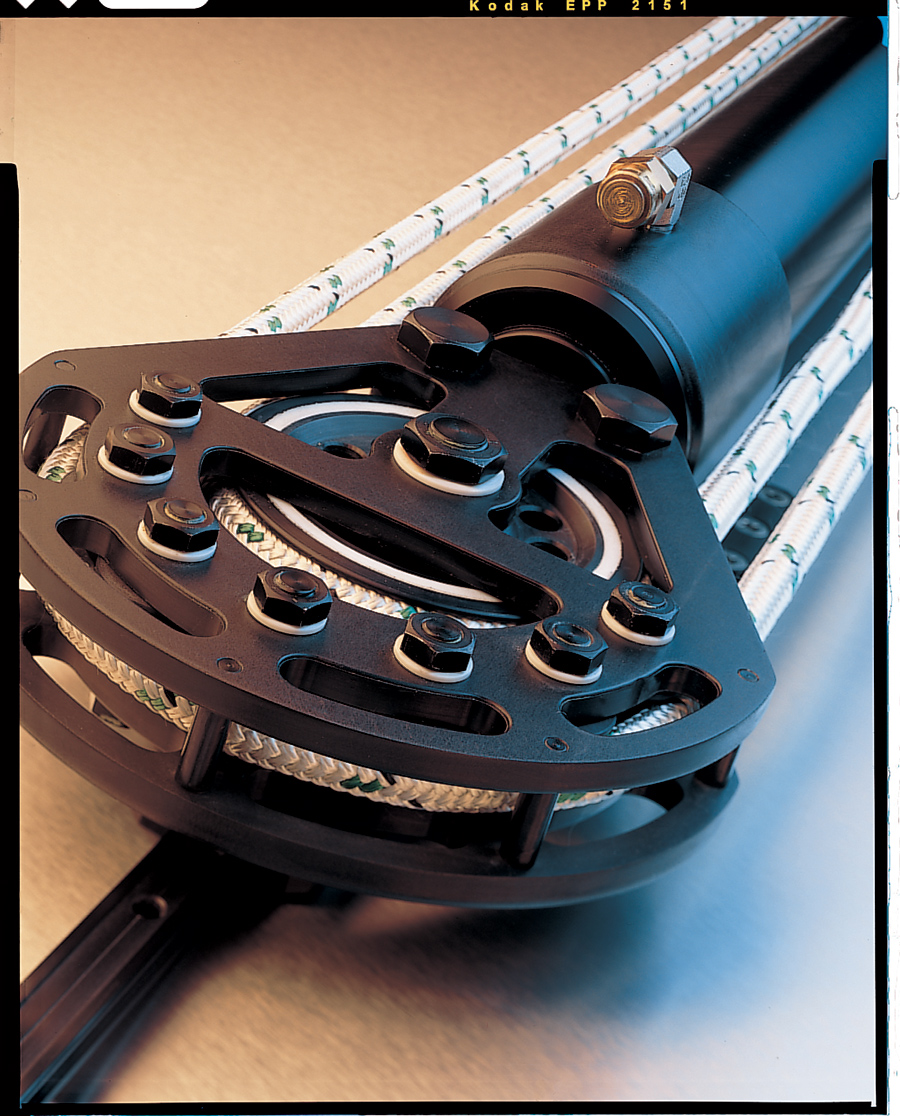 The fully automatic sail trimming system developed in collaboration with Cariboni effectively meant that even the largest yachts could be handled single-handed. 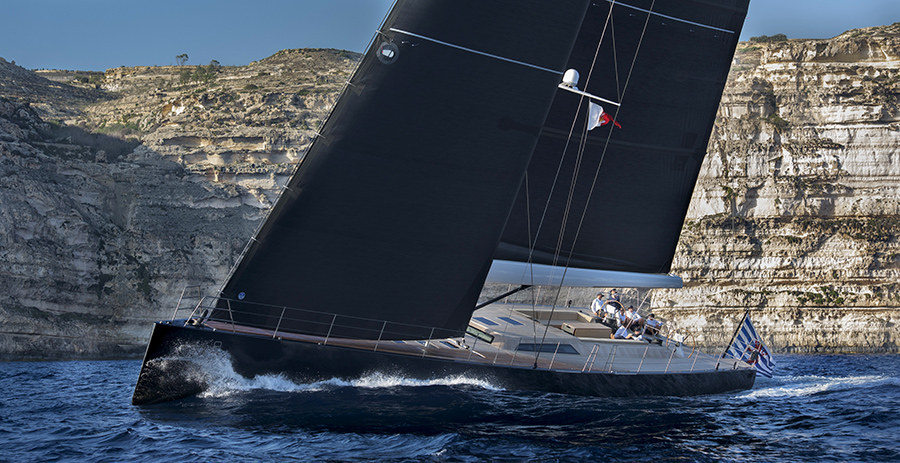 Wally has continuously improved and refined the automation technology, so that on the WallyCento Tango, for example, the jib can be furled/unfurled in just 8 seconds.

When the Wally 77 Carrera (now Lyra) was launched in 2000, she was the first cruising yacht to have a hydraulic lifting keel with bulb (as opposed to a daggerboard or swing keel) for better performance under sail and easier access to shallow bays. 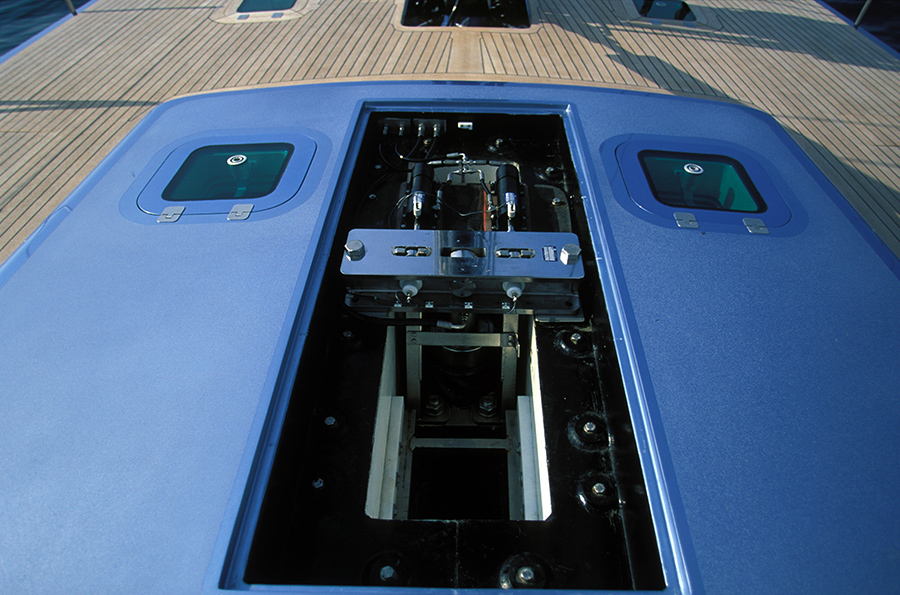 Again, the engineering systems have been continuously upgraded and improved. 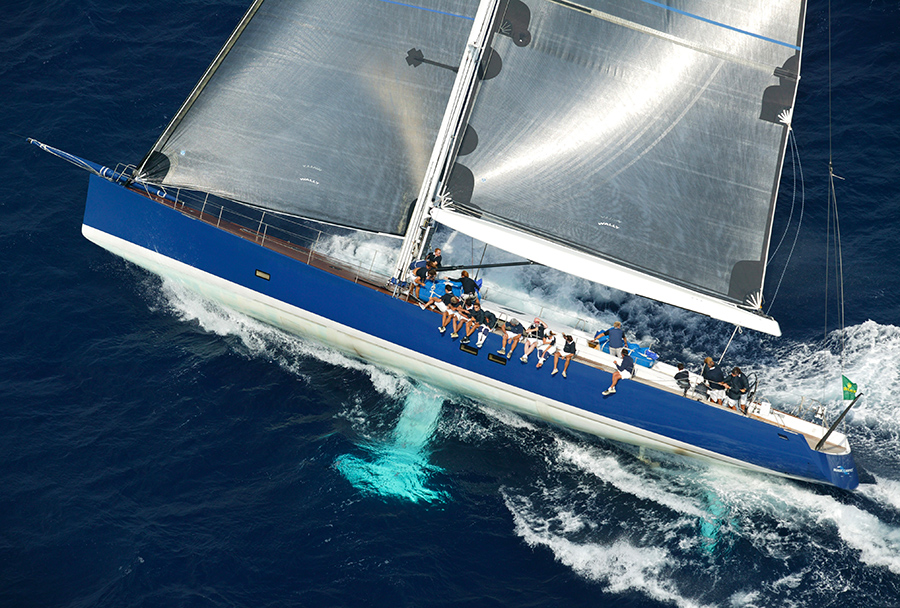 Wally’s firstcanting keel appeared on Tiketitan in 1998, unheard of for anything expect ocean racers at the time.

Beach Club
A beach club or terraced main deck aft that brings guests into closer contact with the sea are must- have feature on modern superyachts. 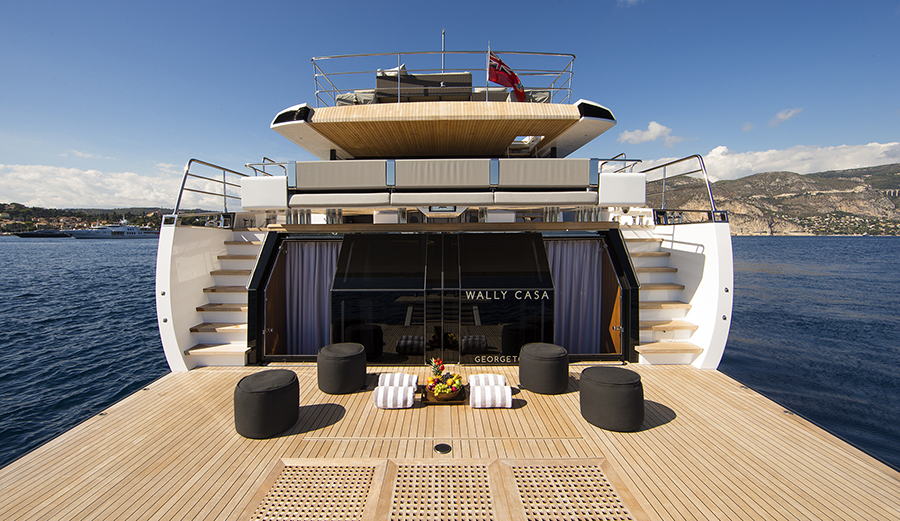 In fact, the terrace-on-the-sea concept was devised by Luca Bassani and first introduced aboard Tiketitan, which had a main salon below deck overlooking the open transom. 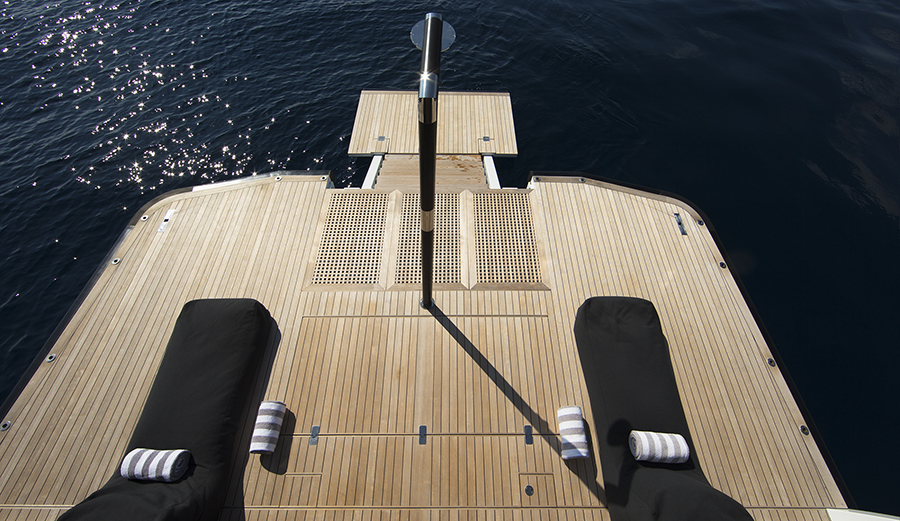 The layout offered unique access to the sea and was applied to other Wally sailing yachts from 24-50m. 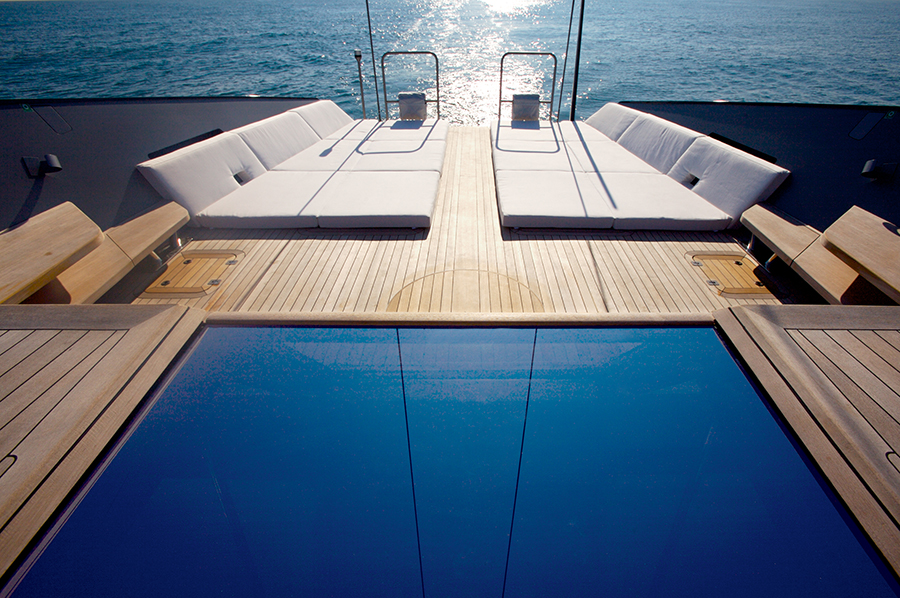 In 2012, the concept was reinterpreted for the first Wallyace motoryacht, which featured an aft owner’s suite and VIP cabin opening onto the terrace-on-the-sea (unique on a motoryacht of its size, the Wallyace also had aside-loading tender garage amidships). 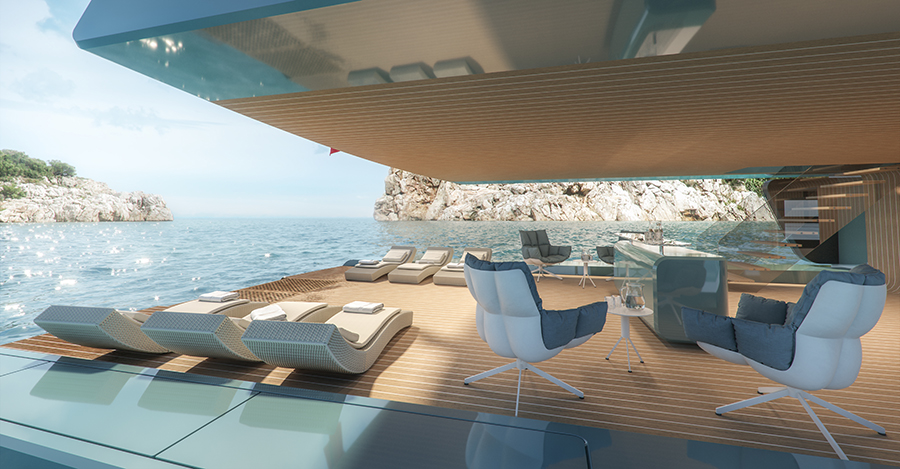 The mirrored glass salon aboard Tiketitan ushered in another innovation that has since become commonplace: the extensive use of structural glass. 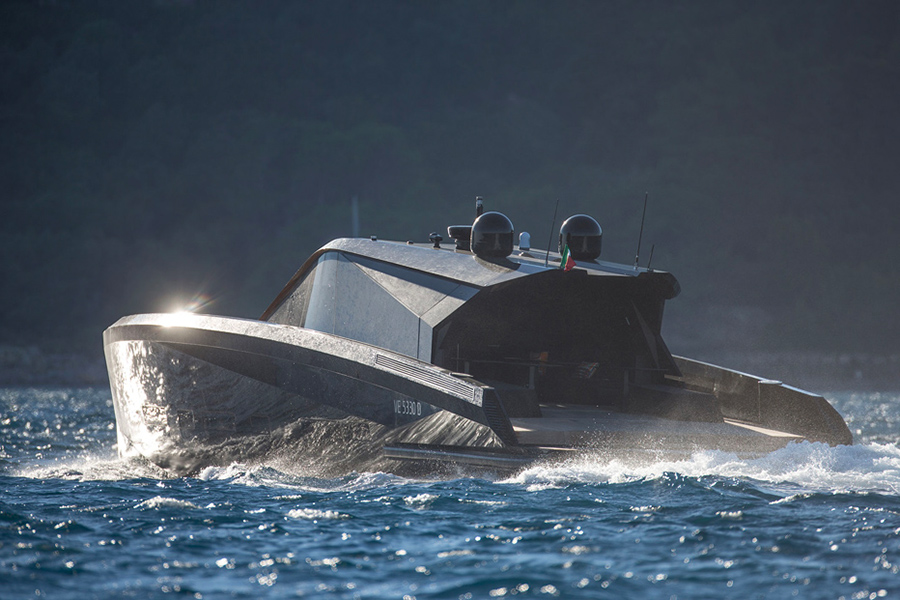 The most striking example was the angular glass superstructure of the 118 wallypower (now Galeocerdo) in 2003. 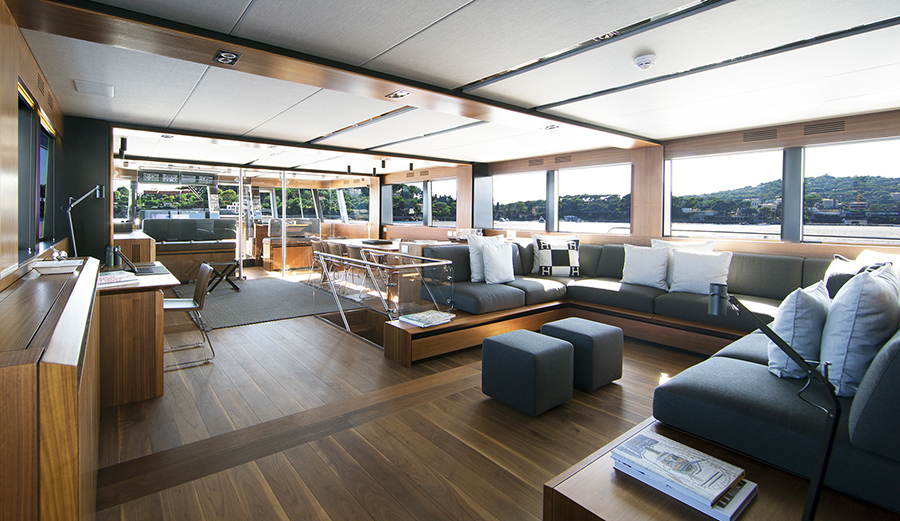 With the lines of a Stealth bomber and performance to match, the yacht also featured a unique forward cockpit with a specially developed awning system, and fold-down bulwarks to extend the living area. 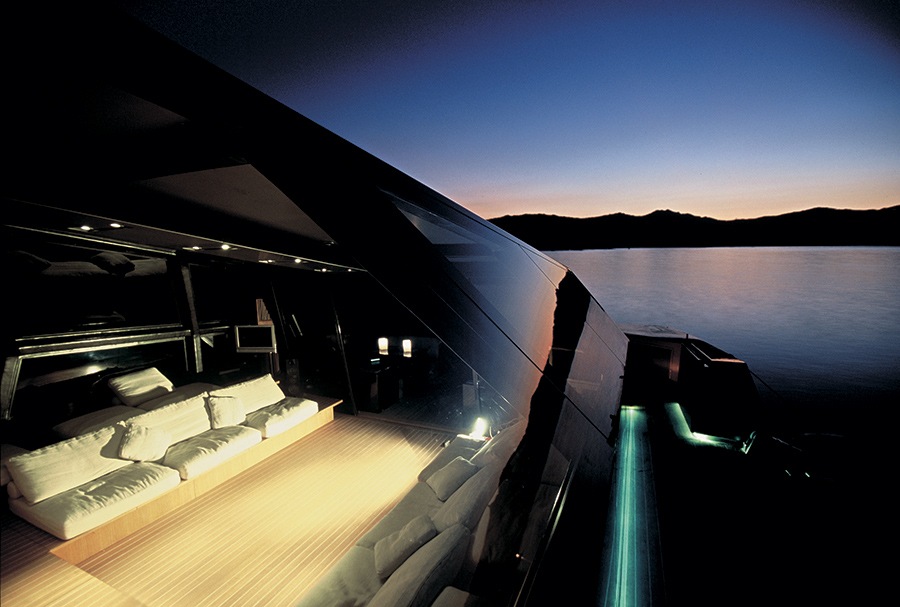 The first strip skylight integrated into the length of the deckhouse on a sailing yacht appeared in 2003 on the Wally 80, and Better Place was the first megasailer to have full-height superstructure windows.

Every yacht designer today tries to blur the barrier between the interior and exterior, but this mission has been a fundamental part of the Wally philosophy from the start. 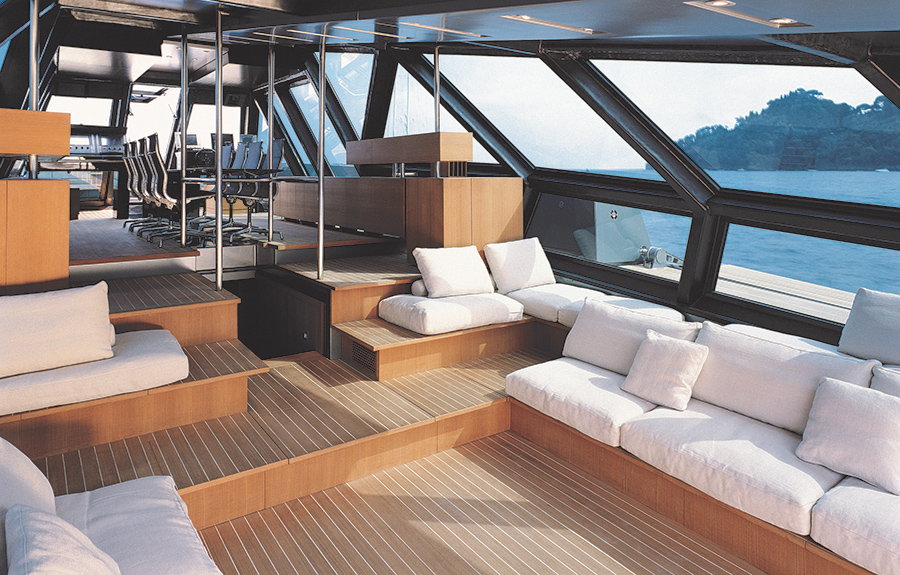 Every innovation the brand has introduced – from the terrace-on-the-sea and the use of glass to fold-down bulwarks and the forward cockpit – is aimed at transforming and intensifying the onboard experience.

Closely allied to the inside-outside concept is the deck and cockpit layout. 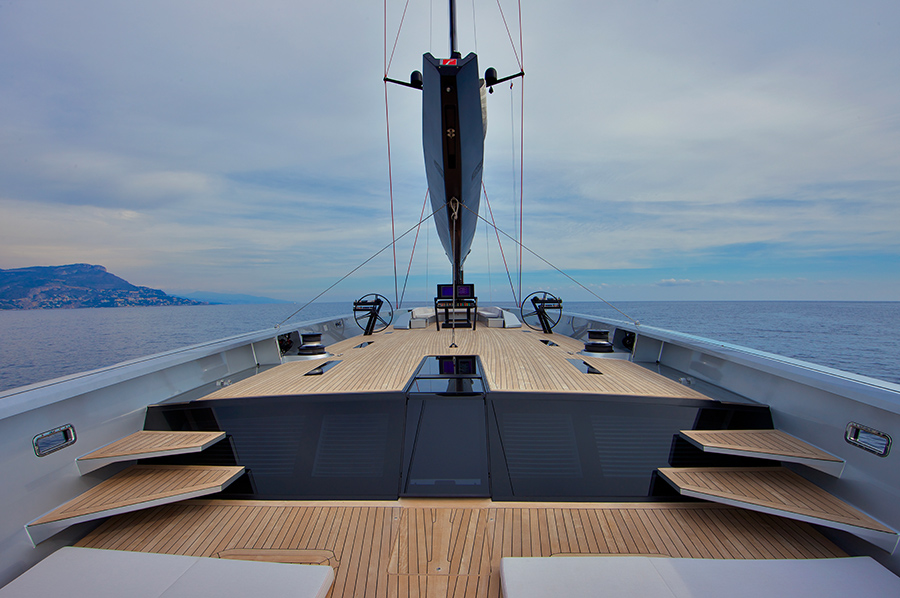 Wally was a pioneer in completely separating the guest cockpit from the manoeuvring and operations areas for reasons of safety, efficiency and enjoyment. 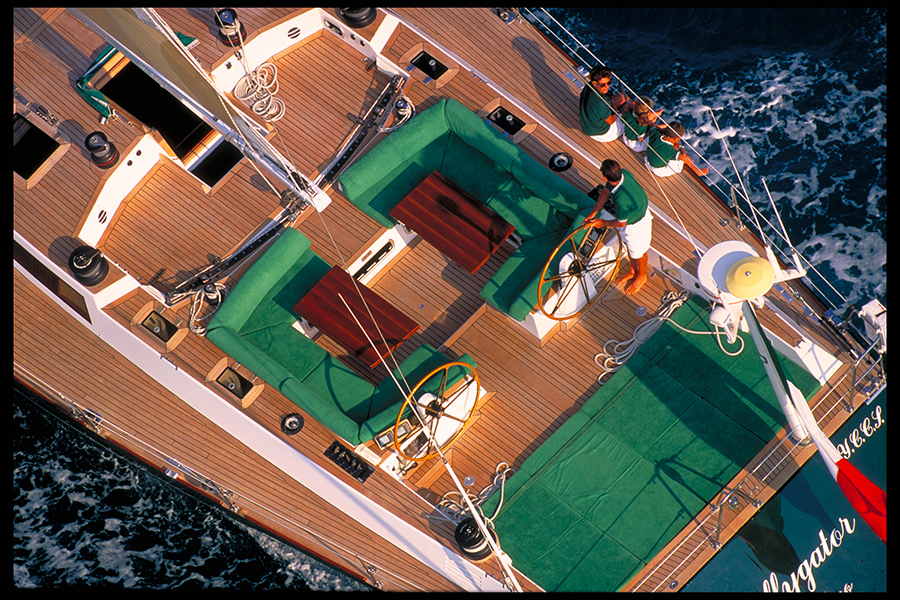 This philosophy reached a pinnacle of purity with Esense in 2006, where the raised bulwarks became an integral part of the hull structure and provided longitudinal rigidity to the huge open expanse of flush deck. 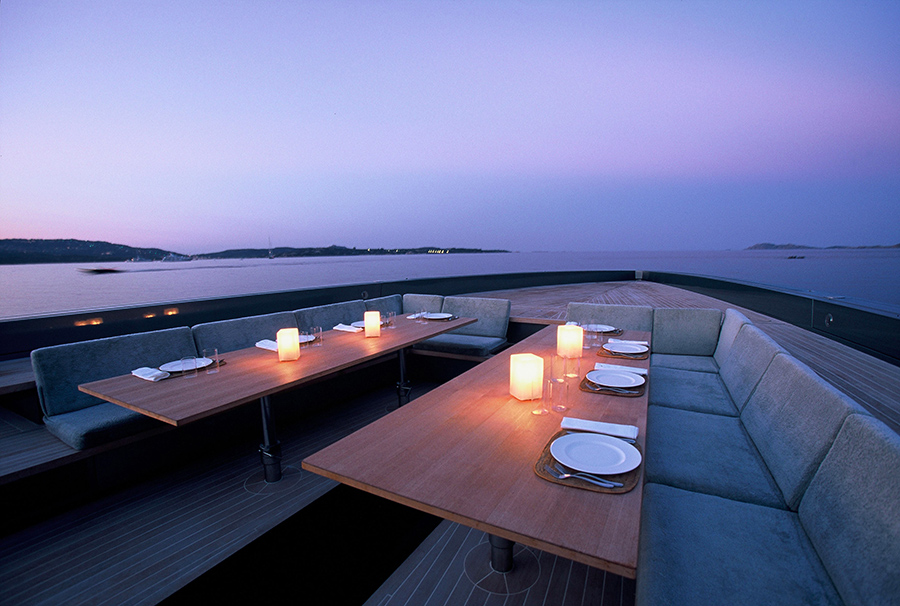 The new Wally 145 megacruiser currently in build introduces an even more innovative deck layout with three social cockpits: two on deck (one shaded and one en plein air) and a private owner’s cockpit integrated into the terrace-on-the-sea). 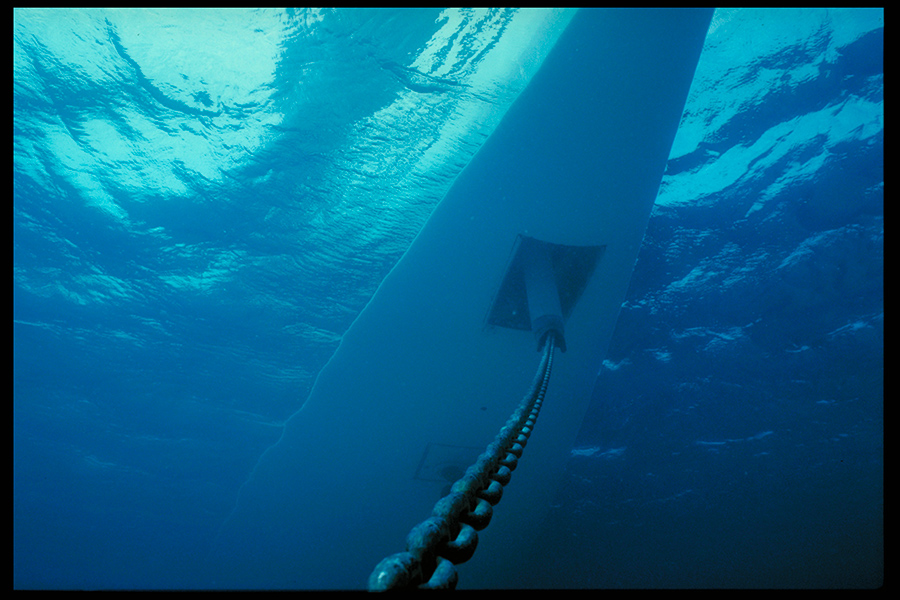 The underwater mechanism provided better weight distribution as the anchor and chain locker is moved aft instead of in the bow, reducing pitching under sail. 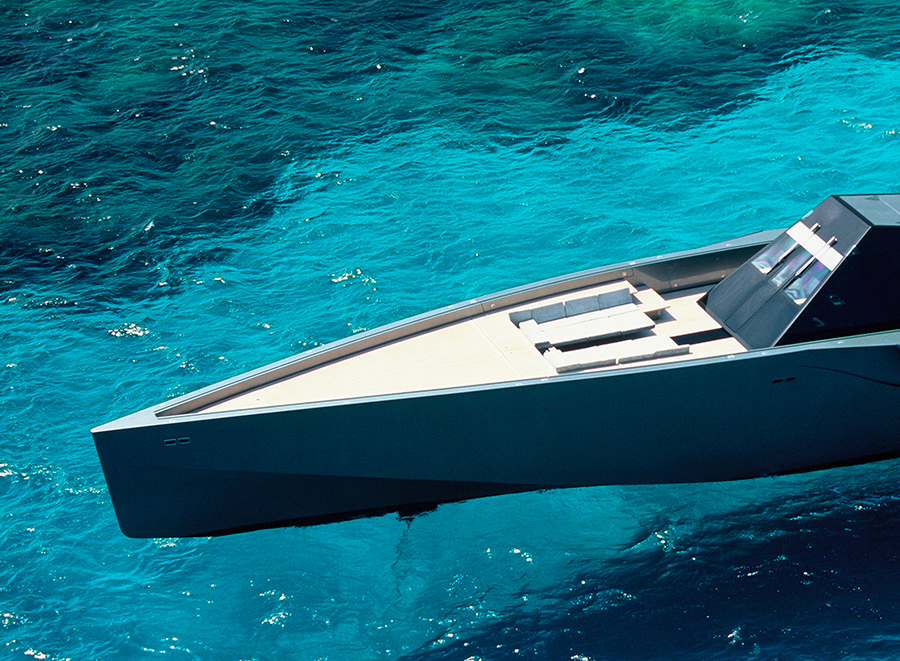 The system was further developed and fine-tuned over the years and is now a standard feature on Wally sailing yachts.

its own lifetime by opening up a market that didn’t exist before. When it was first introduced in 2001, it injected fresh fun and new style into the utilitarian dayboat sector. 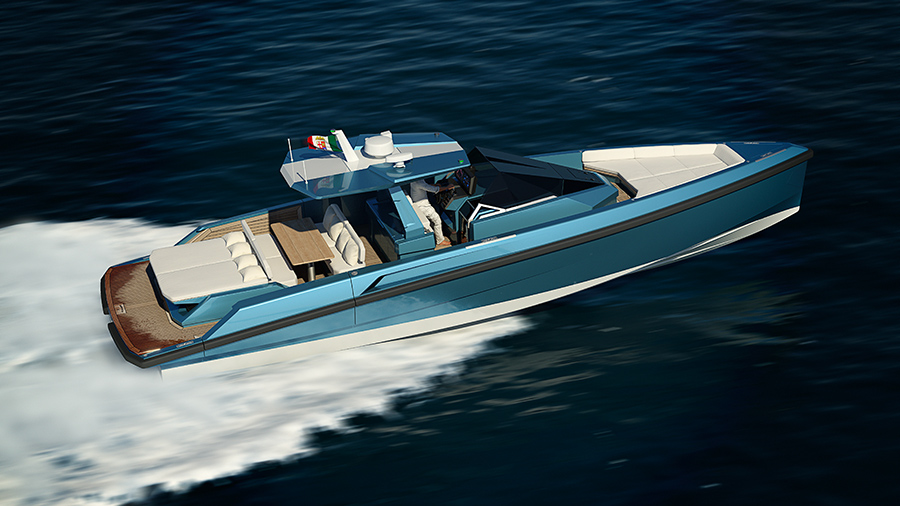 WallyNow the new 48 wallytender, the first collaborative project with Ferretti Group, develops the runabout concept still further and carries all the distinctive Wally hallmarks, including fold-down bulwarks, improved liveability both on deck and below, and lightweight composite construction for top performance.