These are considerable figures for a family business which finds itself competing with real giants in the marine business, of which the three largest are all based in Italy. This extraordinary result has been achieved through the Balducci family’s vision: its ability to maintain leadership of the Maxi Open segment whilst at the same time anticipating market demand by developing new products that meet the requirements of today’s Owners. 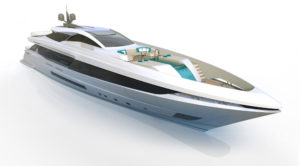 This strategic planning has led to dimensional growth in the Maxi Open Mangusta segment, keeping on guarantying high levels of performance and onboard comfort as per tradition, but paying specific attention both to stabilisation, at anchor and underway, and limiting consumption.

However, product evolution has also involved segments which are new for the Group, like that of long range yachts, where the first 42-m three deck Mangusta Oceano was presented at the latest French boat shows and enjoyed huge success, and that of Mangusta GranSport fast yachts with bulb-shaped hulls. 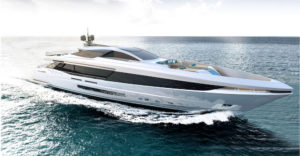 Mangusta GranSport is the Group’s line of fast displacement yachts and was presented two years ago as a concept design. The first model is Mangusta GranSport 54, which has already been sold and is currently being built at the Pisa shipyard. She will be delivered to her Owner in summer 2018. This line, as the long range one, bears the signature of Alberto Mancini.

“In the automotive sector, the name GranSport means a high performance, and excellent onboard comfort. In order to study this new line we started with those very principles, adding specifically nautical-related technical features such as extensive range,” declared Francesco Frediani, Group Commercial Director.

Designer Alberto Mancini continued, “After the initial briefing, I worked on an elegant line which would immediately express a strong character combined with the purity of the Mangusta DNA. From the very first drawings, I imagined and drew a project which brings together interiors and exteriors and has them communicate with each other, using a unique design language which best expresses and indeed emphasises the typically Mediterranean and Mangusta lifestyle.”

The result is a yacht which combines technical features such as speed, an extended range and limited consumption with extremely high levels of comfort. But also design, sporty lines, sophistication, beauty and elegance.

Another model of the Fast Displacement line,  Mangusta GranSport 44, will be presented this evening in Miami and is the style and design evolution of the line.

This highly luxurious yacht fully holds the right to be considered a flagship, if not for her length then for her values and features. She is an intriguing combination of exclusiveness, charming lines and performance.

The distinctive lines can be summarised in a timeless contemporary design, which has no need to shout to attract attention. She is a real beauty, and does not have to show off to be noticed. The interior design, once again bearing Mancini’s signature, is impeccable and features an Italian style that is consistent with and indeed continues the external lines. The propulsion package is gritty and powerful, but also smooth and flexible when necessary.

The distinguishing feature of Mangusta Gran Sport 44 is the upper deck, an area in which the lifestyle concept, understood as an experience of life aboard, finds her maximum expression. The central salon communicates in two directions, towards stern by means of two large sliding glass doors and with the bow sunbridge, where there is a lounge area overlooking 2 large sunbathing areas in the centre of which lies a jacuzzi which can hold up to 7 people. The water continues towards bow, creating a waterfall which descends to the lower deck, whilst three large underwater skylights diffuse sunlight through to the underlying Owner head.

Another highly distinctive feature is the stern beach area, where contact with the sea is fully-emphasised with an impressive 3 communicating platforms:  1 of which can be extended astern and, moreover, two terraces rotate from the side walls of the hull, thus attaining an impressive 75 walkable square metres.

From a more technical point of view, Mangusta GranSport 44 has a fast displacement hull which was designed, as indeed that of the 54 metre, by one of the most famous naval architects, engineer Ausonio, together with the Group’s Technical Office. It features a bulb-shaped hull with sleek lines, thus guaranteeing maximum efficiency and a top performance. From the very beginning of the design, painstaking attention was paid to her sea keeping and the wellbeing of those onboard. Mangusta GranSport 44 is equipped with electric fin stabilisers which guarantee a better response compared with other existing systems, maximising comfort both at anchor and underway. 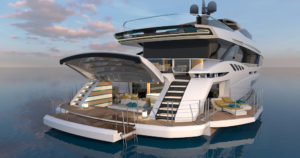 Once again with a view of increasing performance (speed and efficiency), this model features a special propulsion package, a rare feature in the sector of pleasure boating yachts: 3 MTU 16V 2000 M96L engines. Two outer engines are coupled to shaftlines with fixed pitch propellers. The central engine, on the other hand, is coupled to a steerable Rolls Royce (Kamewa) waterjet. The central unit means it is possible to cruise at low speeds, manoeuvre during cruising and carry out dynamic positioning in ports.

This package allows for a forecasted top speed of 26 knots and a wide range  of efficient cruising speeds, with a range of up to 3000 nm at 11 knots and over 1000nm at 20. Thanks to this propulsion, Mangusta GranSport can satisfy the demands of those Owners who want a high performance on long cruises. The package was also designed bearing in mind the environment, as the MTU M96L meets more stringent rules than the current IMO TIER II.

Tank test of Mangusta GranSport 44 will be completed in May 2017 while keel will be laid in September 2017 for delivery in 2019.