If there were such a thing as a yacht design Olympics, Serenity would most definitely be a gold medallist. 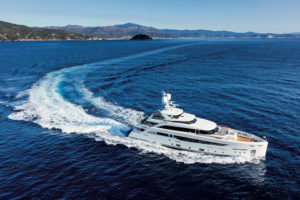 Launched last September she quickly won one of the most coveted prizes in the sector: the World Superyacht Award for semi-displacement yachts over 40 metres. 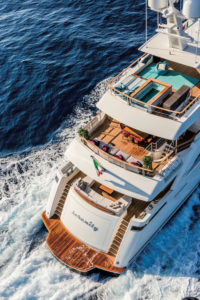 Stretching 42.3 metres in length and 8.8 in the beam, Serenity is an all-aluminium beauty. Most significantly still, however, she is also the first vessel in the SF series designed to help take Mondomarine in a whole new direction. The scale model for the yacht was unveiled the 2014 Dubai International Boat Show where it captured the heart of  the man who made it his business to commission the very first example. 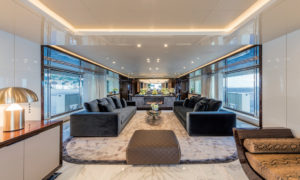 The perfect melding of form and function, Serenity’s lines and layout are the work of Luca Vallebona, a talented young designer who cut his design teeth at Nauta Yachts. “The owner had crystal-clear ideas. He asked for a cabin with a breathtaking view and maximum possible privacy,” explains Vallebona. “That provided me with my starting point for the interior layout and I developed the entire yacht around the master suite which is where the wheelhouse normally is on the main deck. 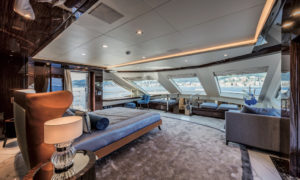 I was also asked to stay under the 500-ton mark so I worked on volumes and the bow section. Serenity’s vaguely military look, her lines and plumb bow are there to balance out her imposing height.  One she splashed though, I realised that my sailing experience had had a profound influence on me without my even realising it,” he concludes. 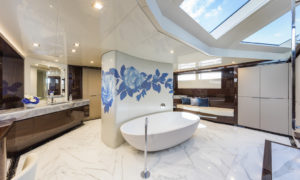 The owner’s privacy is assured by stairs that bypass the upper deck which is given over entirely to the owner and his family. An unusual choice and one that wielded a huge influence on Serenity’s layout.

Serenity’s interiors are the work of Fatema Almaidan of SFL Design who is not only a friend of the owner, but also a well-established pen having previously worked on a  Benetti Tradition 105 and a Riviera 77 in a addition to a slew of residential projects. 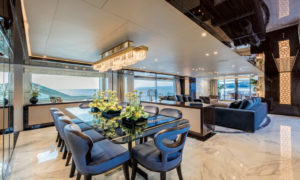 This strong connection with the boat allowed her to give full vent to her talents, earning the applause of both public and sector professionals like. Serenity’s most notable characteristics are her wonderfully warm Middle Eastern-influenced colour palette and the decision to alternate reception areas with very private zones. 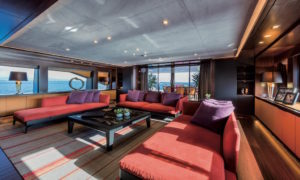 “The owner asked for Andalusian-style interiors with detailing that would hark back to his own roots,” explains the interior designer. “He wanted something comfortable, elegant, liveable and intimate at once. As ever, I took my inspiration from a mix of cultures and styles but I opted for Italian furniture and fabrics because I just adore your design”. 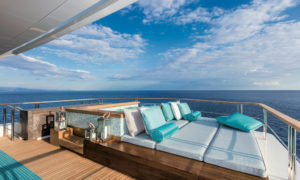 A tri-deck plus fly, Serenity’s various decks are very clearly delineated in terms of the use of their space. The lower deck is home to her four two-berth guest staterooms, each one of which has a different colour scheme that even extends to the marble used in the bathrooms. 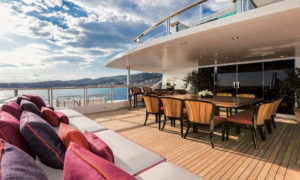 The main deck, however, is almost entirely taken up by the saloon. Here Calacatta marble has been used for the floors and striking full-height windows are edged in gloss rosewood frames.  The result is exceptionally peaceful and relaxing. Despite an overall linearity, there are also details, such as the gilded elements over the windows, that are a nod to Middle Eastern styling. 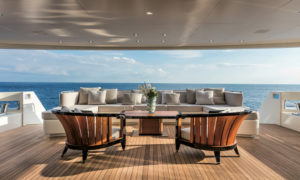 Two sofas upholstered in Antico Setificio Fiorentino fabric sit face to face on either side of a fireplace that must be delightfully cosy when a fire is burning.  The upper deck is devoted to the owner’s private quarters. Aside from two relaxation areas forward and aft, it features the master suite and a saloon/home cinema where the dominant colours are red and ochre. 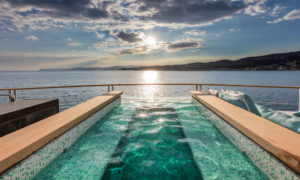 Dominated by a bed featuring a Poltrona Frau headrest, the master suite delivers spectacular views thanks to full-height windows and the decision to put the bathroom and its freestanding Agape bath on a slightly lower level. It also has three open-out side balconies similar to those at saloon-level albeit smaller in size. Italian designer names have been put to sophisticated use throughout Serenity: from lights by Artemide, Baroier & Toso and Patrizia Garganti to outdoor furnishings by Paola Lenti and sofas by Donghia. Combined with some clever Eastern touches, they  make her a genuine dreamboat.