It took four long years from My Song’s initial concept to the day she first touched the water. Although built by Baltic Yachts and clothed in Reichel/Pugh waterlines, the 130 footer’s general concept, exterior and interior design are all the work of Nauta Design.

Why did she take so long to complete? “Our dialogue with the owner  Pier Luigi Loro Piana lasted a year and a half and it was an incredibly stimulating time workwise,” explain Nauta Design’s Mario Pedol with Massimo Gino, who designed the previous 84’ My Song back in 1999. “Stimulating because he is a huge enthusiast and always wants to check out all the possible solutions which sometimes can run to dozens. 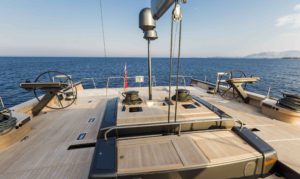 But there was also a growth process involved in the genesis of the new My Song. At the start of the project, she was to be 115’, then the length went up first to 119’ and then 125,” says Pedol. 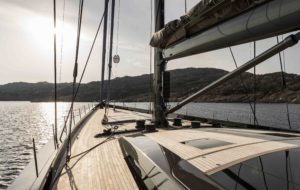 They eventually stopped at 130’  but the research work continued. Even once the necessary two and a half year construction phase had begun in the yard, Nauta Design and the owner kept chipping away, even looking at the possibility of installing a diesel-electric set-up or micro-turbines. 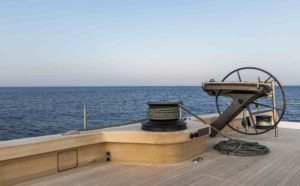 Every possible option was researched and checked out. That meant that as the build gathered momentum, they were working on two different engine room solutions contemporaneously.  One featured the traditional straight shaft transmission and one a pod system with retractable variable pitch propeller. 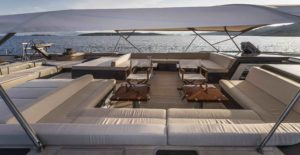 The choice ultimately fell on the Retractable Propulsion System (RPS), developed by Baltic Yachts and Danish company Hundested Propeller and debuted on My Song. But it is far from the only innovative solution aboard – not only is there also a lifting keel that cuts the draught from seven to 4.8 metres but the crew can switch between a pinhead mainsail for cruising and a square-top for racing. “As with the previous My Songs, the challenge was bringing together the owner’s two passions,” continues Pedol.  The difference is that this time the incredibly comfortable interiors cannot be dismantled (the old My Song would literally be emptied out for racing, ed.’s note). But it is not easy to ensure those two worlds could coexist on a 40-metre boat with a light-ship displacement of just 105 tonnes. 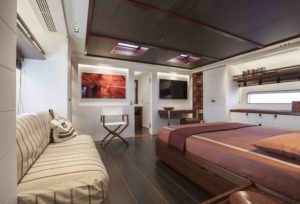 Another tricky problem was creating a deck plan that was comfortable, functional and not heavy in design terms yet also equipped with the leading-edge Maxi 72-style deck hardware systems. 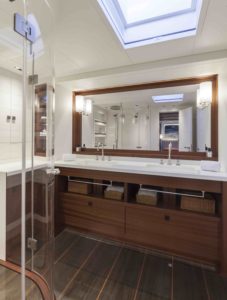 A near-full-size mock-up was used to hone the ergonomics of the large central cockpit, for instance, which also has a bimini when required to protect it from the sun, resulting in a very sheltered al fresco lounge area. 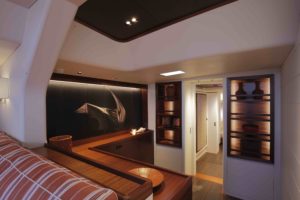 One of the new My Song’s signatures is her bulwarks which are 30 cm wide and 30 cm high, creating a comfortable seating area around the entire deck that feels both secure and gives those aboard a sense of belonging. 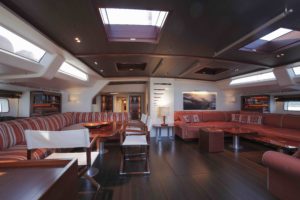 The unusual design of the topsides is also reflected in the yacht’s profile, masking the deckhouse which, although very subtle anyway, hides interiors with very good ceiling heights. 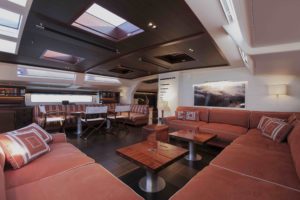 Also in the mix are the master quarters forward, an office that converts to a cabin, a central dining (above the engine room) and lounge area, two two-berth guest cabins aft of the saloon and then the crew and service area. Mario Pedol told us that the interior layout was “an evolution of the previous My Song, but thanks to female input is now warmer and cosier. It is absolutely new: the style is classic but unprecedented.” 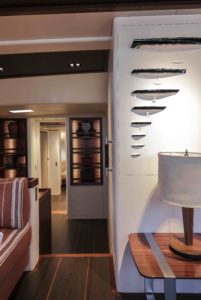 He adds: “The materials used were also selected as part of that thirst for experimentation that underpins the design as a whole. These include linen composite and mahogany floors and ceilings.”   Mahogany crops up again in the furnishings which, depending on the space, have glossy or matt finishes. 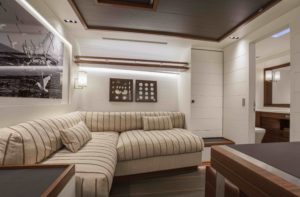 Warm Loro Piana textiles add the perfect finishing touch to spaces that feel both sober and classic. “My Song is dominated by two factors: leading-edge technology on one level  and imaginativeness in her interior design on the other, both the products of a process during which we were able to really engage with a passionate, sophisticated owner,” concludes Mario Pedol.