There is no going back. The die is cast. While it comes as no great surprise, newness is unsettling across the board. But in the nautical sector it seems to even more so. When they first appeared on the scene, they were greeted with a certain amount of scepticism. But then we saw the spectacular performances foils delivered and all those doubts melted away like snow in the spring sun, replaced by unbridled enthusiasm. 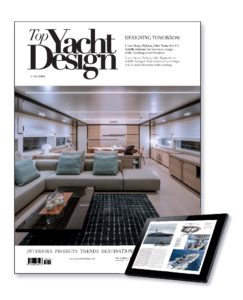 R&D has accelerated crazily over the last five years so we’ve gone from multihulls to monohulls, windsurfers and now motorboats. Foils and their rules are dictating the design rules of the future. It is early days yet but their potential is clear. Once again, sailing has proved an invaluable test ground for developing technology that has crossed over to monohulls. The AC75s look like they will write a whole new chapter in sailing history, in fact. “The AC75 Class Rule is completely unprecedented and everyone is starting from scratch. Although there are elements that are the same for everyone (including the foil movement system, ed.’s note) and a relatively strict rule, I’m sure all the teams will come up with some original ideas and figure out any way possible of getting around the rules that exists. It’s a lateral thinking game. Whoever does that best will win. As is always the case. ” Confirmation in our exclusive interview with Mario Caponnetto, one of the world’s leading foil experts and head of Caponnetto-Hueber SL, a specialist naval engineering company commissioned to design Luna Rossa’s foils for the 36th America’s Cup. The  Beneteau Group has also penned the Figaro Beneteau 3, the first production foiling monohull. Although the latter does not rise out of the water, it still provides further proof of their scope of foils’ talents.