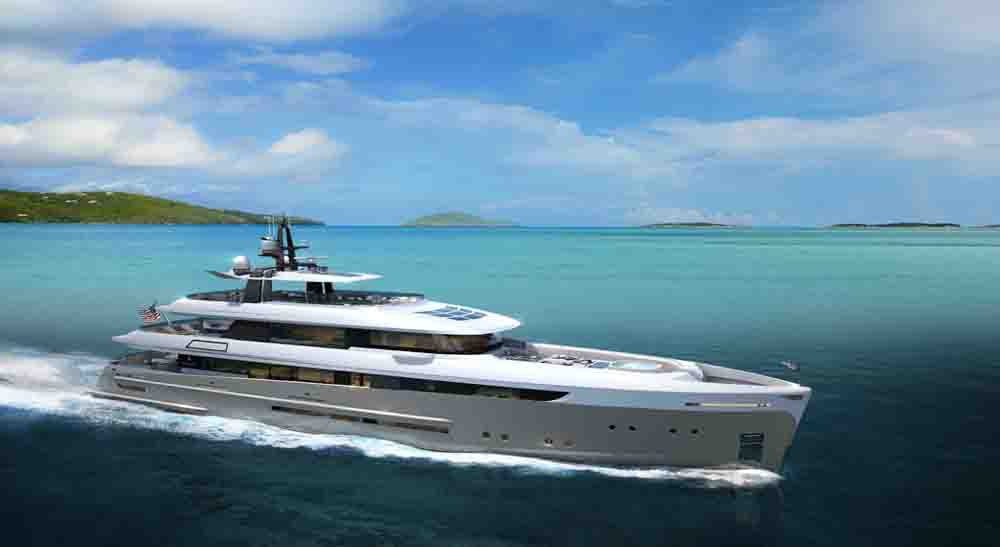 In Fort Lauderdale Admiral exhibited the 37m (120 ft) M/Y Nono, winner of the 2015 World Super Yacht Award as best “Semi-displacement or Planing Two-deck Motor Yacht of 30m to 37.99m”. Attendance at the show was strong, and as in the past, Thursday and Friday brought in many serious buyers and representing brokers from the Americas and beyond.

With her unique exterior styling, distinctive color schemes, and contemporary but elegant interior décor, Nono seemed to resonate well with American buyers looking for a refreshing take on the Raised-Pilothouse category.

Additionally, with her all-aluminium construction, semi-displacement hull form, shallow draft, and extensive long-range capability, many prospective owners found the vessel well-outfitted for their Caribbean cruising requirements. FLIBS was also the perfect venue to introduce another new and important project for Admiral: the “Vestal” series designed by renowned American firm ‘Setzer Yacht Architects’. Led by Ward Setzer – arguably the most acclaimed large-yacht designer in the United States – the Setzer team has produced dozens of award-winning projects constructed at premier shipyard in the United States and around the world. Partnership with Setzer for the Vestal Series was thus a logical pairing for Admiral, which will aim to significantly increase its U.S. and Latin American presence through the new series introduction, which has been developed to address American taste preferences and technical requirements while also offering an “Italian Touch.”

The Vestal series includes three models of 42m (137 ft), 50m (164 ft) and 62m (203 ft); the 42m model is a semi-displacement yacht to be built in aluminum while the other two are full-displacement yachts with steel hull and aluminium superstructure. Imagery and specifications for all three models have now been made available, as well as a replica scale model of the Vestal 5000 that was publically unveiled by Group CEO Giuseppe Taranto and the Vice Chairman and Sales Director Francesco Carbone during a press conference at the Ft. Lauderdal Boat Show.