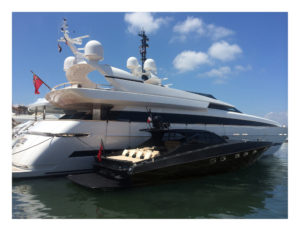 The epic Millennium Line – the OTAM core business – is the result of over 60 years of power boating experience and outstanding reliability. Current models are: 45’, 58′ Open or HT, 65′ HT, 80′ HT and the Millennium 100′.

The yard invests into development of a wider range and more customization possibilities along with the introduction of new equipment solutions, such as VOLVO IPS propulsion, Garmin navigation and other state-of-art amenities like entertainment, navigation and communication new systems.

“We had successfully built and delivered a relevant units of chase-boats – fully customized for very important superyacht owners, in collaboration with the design and engineering department of main international shipyards over a decade. We actually expect a growing demand for this niche of market, based on a solid number of on-going negotiations with potential buyers”- said OTAM Sales & Marketing Director Matteo Belardinelli. 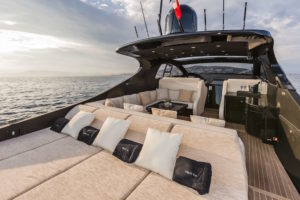 The development of the chase boats of Millennium Line will allow offering a wider range of supply vessel and giving the owners a possibility to customize them in a better, more sophisticated way.

The two main models for the Millennium Line chase boats range – that should be available in just 8/10 months from the signature of the contract are the 45 equipped with Volvo IPS 600 and 58HT with IPS 1200. Both claims a max speed of over 35 knots.

“The OTAM strategy fully corresponds with the existing trend for a chase boating requests on the market”, adds Belardinelli. “Those kind of vessels are becoming posh, popular, fashionable…because owners get way bigger boats than regular tenders, they can go very fast (even in exceed of 50 knots) from point A to point B, bring guests and owners quickly and in complete safety and comfort mode to the mothership”. 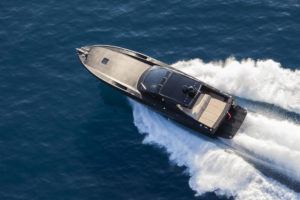 A larger chase boating production is also related to full customization yard capabilities and owners requests – that usually matching entertainment equipment, interiors and other various amenities of the mothership – and rise to a new “status-symbol” – sometimes more than the mother ship. Chase boating is the definition of a new-classic “sea toy”, a new way to show-off.

OTAM main achievement on this segment is the 58HT C/B Crazy Too. Built to be the chase-boat for an existing superyacht, Crazy Too is a unique boat, a concentration of performance, technology and design. 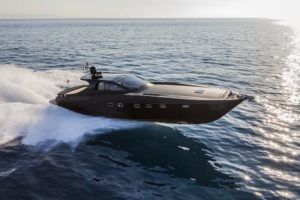 Powered by twin Caterpillar C32 Acert engines with 1724Hp each, Otam 58HT stands out at a first glance for a custom coloured black hull and hardtop, with a deck entirely wrapped in a “carbon look” film.

The interiors are equally customised with a three cabin layout that has been masterfully designed by Cristiano Gatto Design to suit the owner’s tastes. 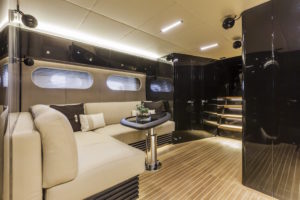 OTAM 58HT also pushes the electronics envelope, both audio/visual and navigational. The custom built AV system on board Crazy Too is extraordinary, adopting the same sophisticated entertainment found aboard the mother boat. It delivers impressive power that is difficult to find out on boats of this size, and everything is managed by iPhone and mini iPads.

Furthermore the M7 satellite dome allows the guests to watch prime television from satellites worldwide, including the UK, Europe and more. 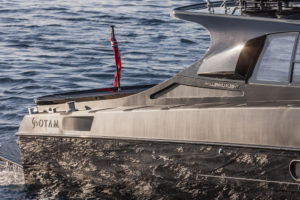 Internet access is served by a dual connection 4G router allowing movement from one country to another without swapping SIM cards or changing the units’ configuration. The possibility also exists of smoothly connecting to Wi-Fi or marina broadband services.