On the www.barchedepocaeclassiche.it website has recently been publish an interesting article that show how is possible to become a sharingowner of a wonderful 8mSI launched in 1930 and penned by William Fife. Its name is Finola.

Here is the article 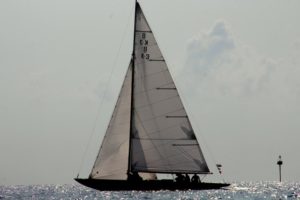 It is now possible to become part-owner of Finola, a spectacular wooden racer, 14.58 m, launched in 1930 by the legendary Scottish shipyard Fife and designed by William Fife III. Finola is an International 8-metre-class. The yachts belonging to this class were the protagonists of Olympic regattas in the period between 1908 and 1936. She is in excellent condition and is getting ready for the 2018 sailing season. With just a few thousand euro it is now possible to become joint owner of one of the most splendid classic yachts that plaid an important role in the history of international yachting. 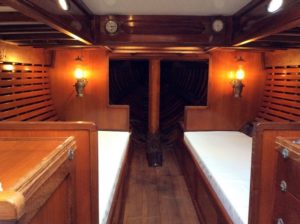 HOW TO OWN A SHARE OF FINOLA
Euro 31,000. This is the amount needed to acquire one sixth of the ownership of Finola, International 8-metre-class. She was designed and built in 1930 by Fife shipyard in Fairlie (Scotland), one of the most renowned shipyards at international level. About 500 International 8-metre-class yachts (please be aware that this is not the length of the vessel, which indeed is 14.58 m, but the result of an algebraic formula) have been built all over the world. Finola is one of the 200 of such yachts that are still sailing. Finola is a Fife. The prestige of this brand can only be compared to top luxury cars. Her symbol, a golden dragon carved in the bow, has become over the last century the trademark of uniqueness and elegance. Finola is a Bermudan sloop. She features a mahogany hull, with oak and acacia frames. Teak deck. 90 sq m sail area. Two spreader spar; spruce wood mast and boom. 21 hp Nanni diesel engine. For more information regarding the acquisition of share(s) of Finola, please visit the following website: www.borascura.com or contact Mr. Giorgio Conventi (+393476827678). 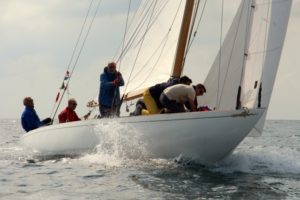 SHARED OWNERSHIP / SYNDICATE SAILING
Indeed the shared ownership or small syndicate formula is quite frequent in the classic yacht  world. Several classic yachts racing in regattas that take place in the most beautiful spots across the Mediterranean, from Italy to Spain and France, are co-owned by syndicates. This enables the part-owners to share the maintenance costs, but above all they can always rely on a crew to manage the yacht and race her. Finola is currently moored in the Adriatic sea. The future co-owners will be able to decide which regattas to attend, when and how to spend their sailing holidays or whether to join traditional yachting events. Every year the International Eight Metre Association organizes not only European and World Championships but also international regattas for this class. 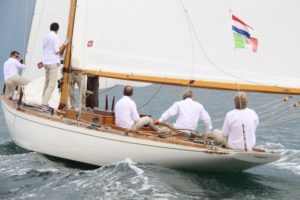 FROM SCOTLAND TO THE MEDITERRANEAN
Finola was built for the British owner Herbert Johnson Hant and after her launch, with sail number K3, she started taking part in regattas with other International 8-metre-class yachts in Hamble (Hampshire) close to the Isle of Wight, the birthplace of America’s Cup, the oldest international sporting trophy. During World War II, the fleet was dispersed in the Mediterranean, in Northern Europe and in North America. Finola was initially moored in Trinité-sur-Mer, Brittany, and was then acquired by a British syndicate that made her race again on the Clyde in Scotland. She was then owned by a Portuguese owner and raced her in the Atlantic under the sail number P107. In 2006 she left Lisboa and sailed to Italy, where she underwent a significant restoration, that enabled her to take part, in 2012, in regattas near Trieste. In 2016 she was awarded the second prize in the category “Vintage” during the first edition of the classic yacht challenge in the Adriatic organized by “Associazione Italiana Vele d’Epoca” (Italian Classic Yacht Association). In 2017 she was awarded the “Trofeo Principato di Monaco” in Venice.