Pershing continues to accelerate on the course of innovation and contemporary aesthetics. Like its predecessor 9X, the new 8X is made of carbon fibre. This material not only means lighter weight, greater speed, and lower fuel consumption, but also more volume due to the ability to design larger, more comfortable spaces. 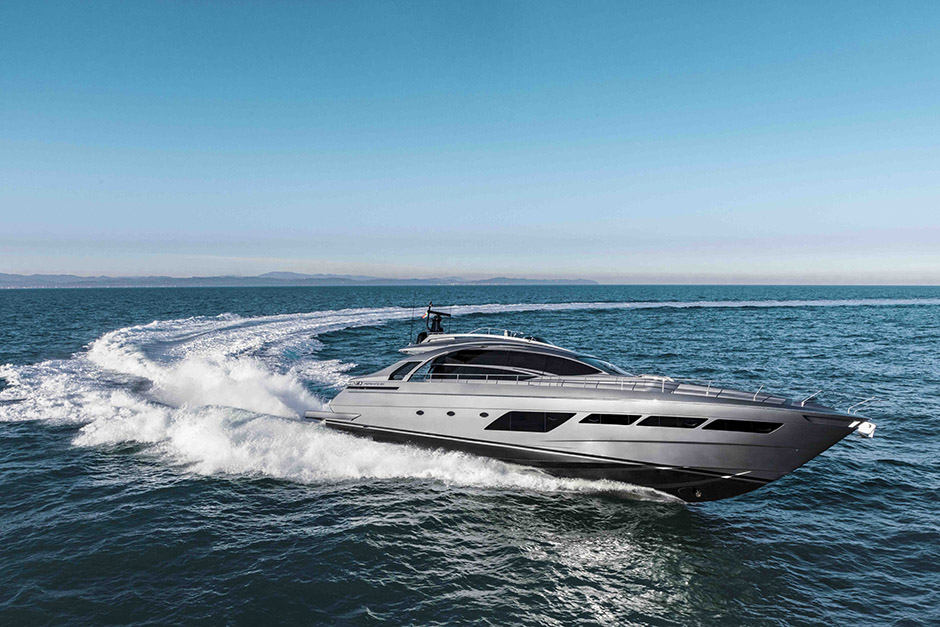 The on-board comfort is extraordinary, thanks to the many benefits offered by the new system that integrates propulsion control with the manoeuvring, navigation, and monitoring systems. With the new 8X, “piloting” a Pershing, even at high speeds and without the support of the captain, is fun and accessible. 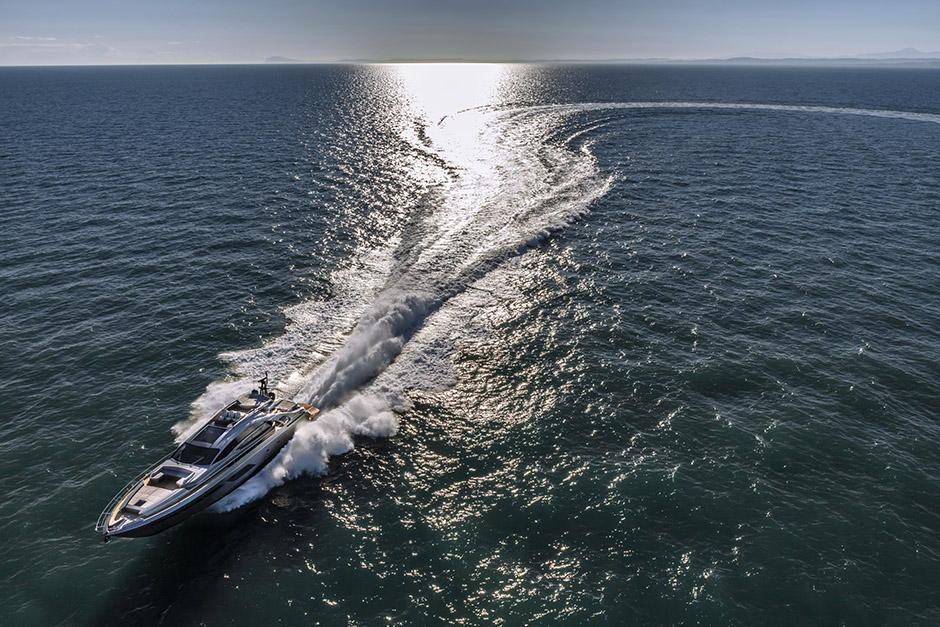 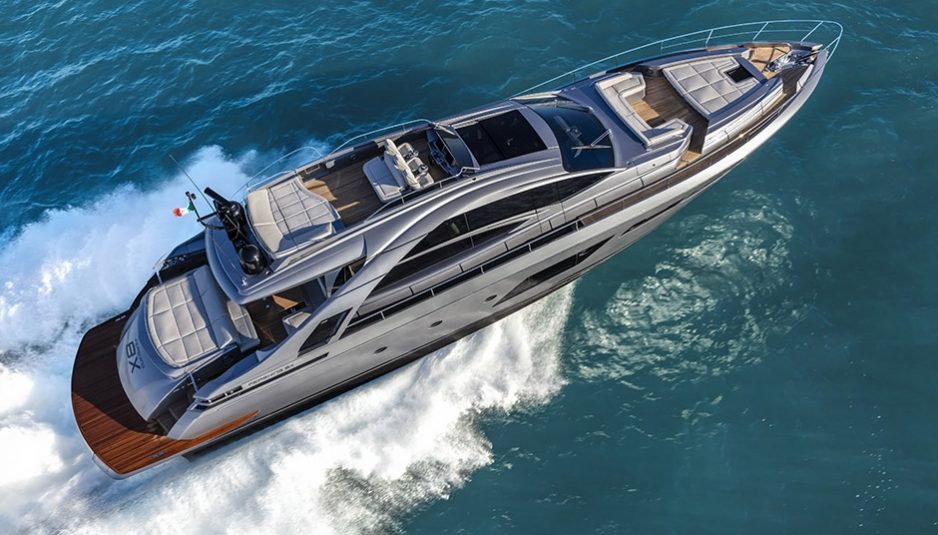 Pershing 8X expands the current range of the brand, as it is situated in the under 30-meter market segment as an innovative product that represents a true evolution in terms of stylistic-functional aspects and performance. 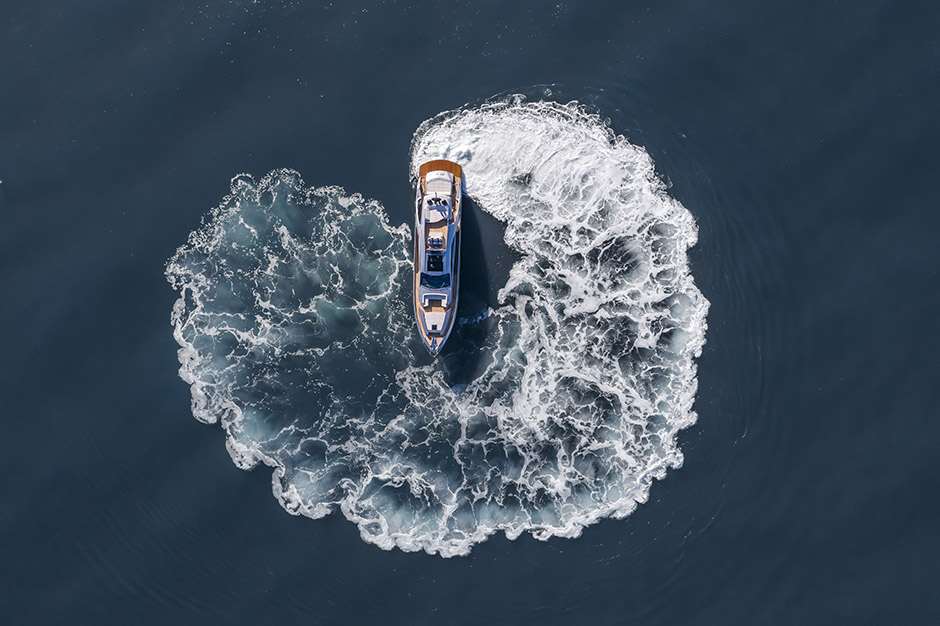 Made of carbon fibre, this new model features lines that are even sleeker and sportier, enhanced by characteristic Pershing elements like imposing side wings and the aerodynamic profile of the sundeck. The result is a yacht in the sport-fly range with an unrivalled combination of quality and innovation. 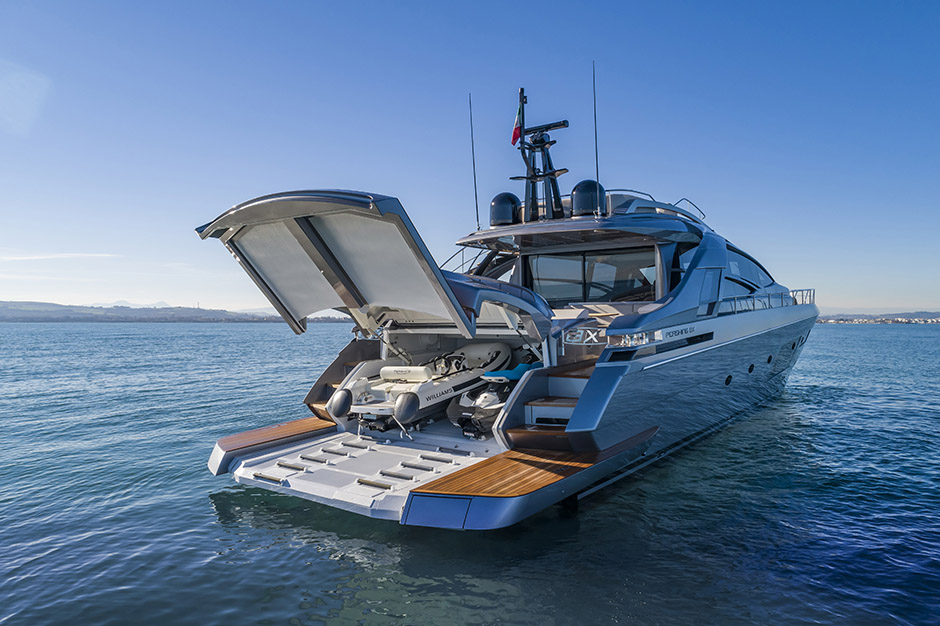 The aft swimming platform leads to the garage that can hold one Williams Sportjet 345 jet tender and one jet ski. Stepping up to the cockpit, it overlooks an area with a sunpad and opposite a dinette with a sofa and a coffee table that can be electrically lowered on request to create a second relaxation space. 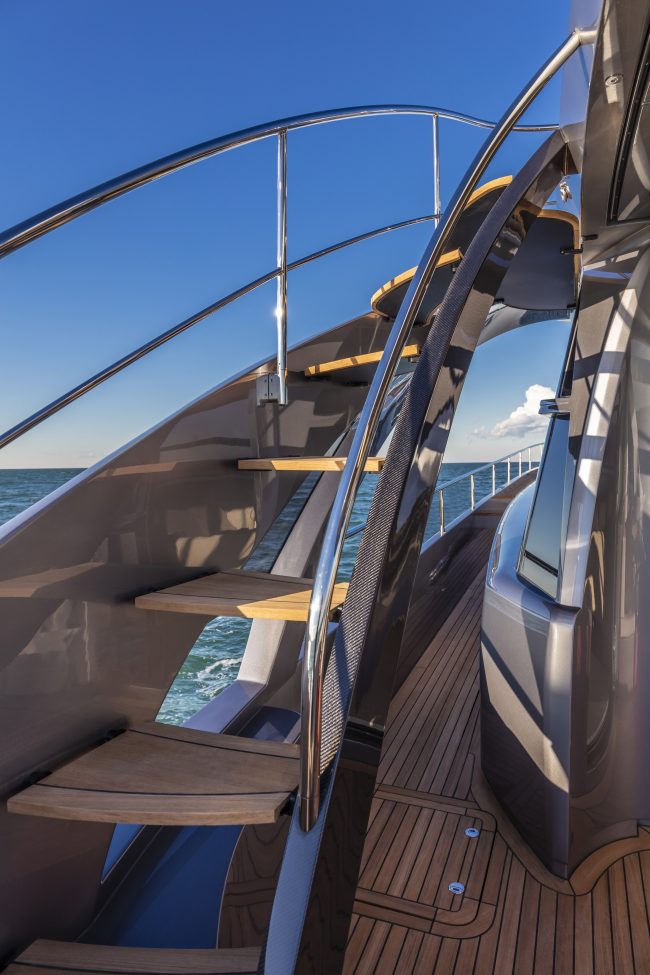 On the port side, Pershing introduces the first distinctive and characterizing innovation of the new 8X: the stairway giving access to the sundeck is integrated in the characteristic Pershing side wing, which thus becomes a functional as well as an aesthetic element. 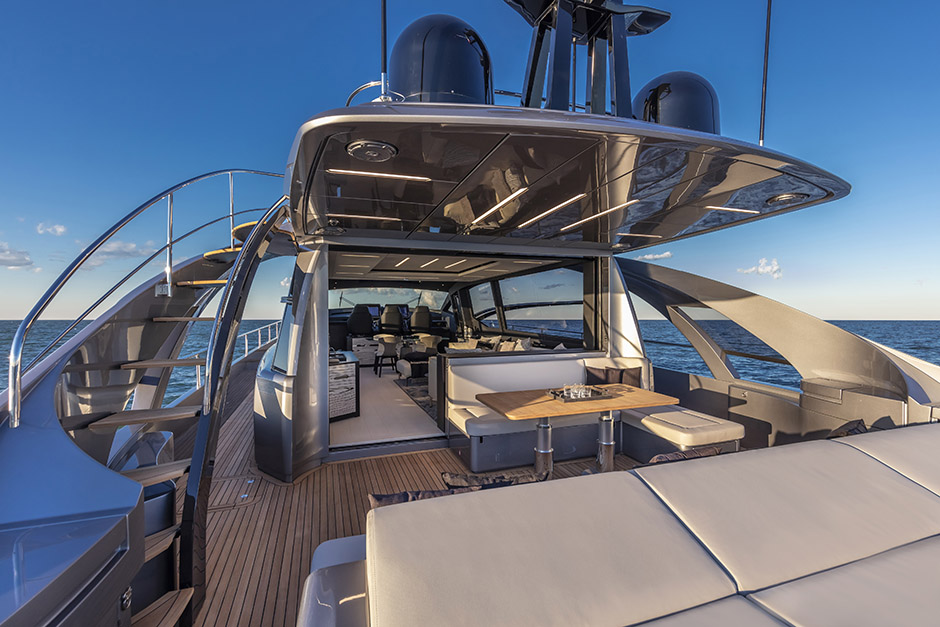 Composed of black painted steel steps covered in teak, framed by a carbon fibre upright and two lifelines, this new solution not only highlights the clean style but above all allows the owner to dedicate more space to convivial life in the spacious 22 m2 cockpit as well as on the sundeck. The mobile grill and sink are situated to starboard, while lockers and storage compartments are positioned on both bulwarks. The other exterior zones are also exceptional in terms of aesthetics and functionality.  A large area forward holds a separate sofa and sunpad. Optionally, the terminal part of the sunpad can be turned into another sofa opposite, creating a compact dinette. 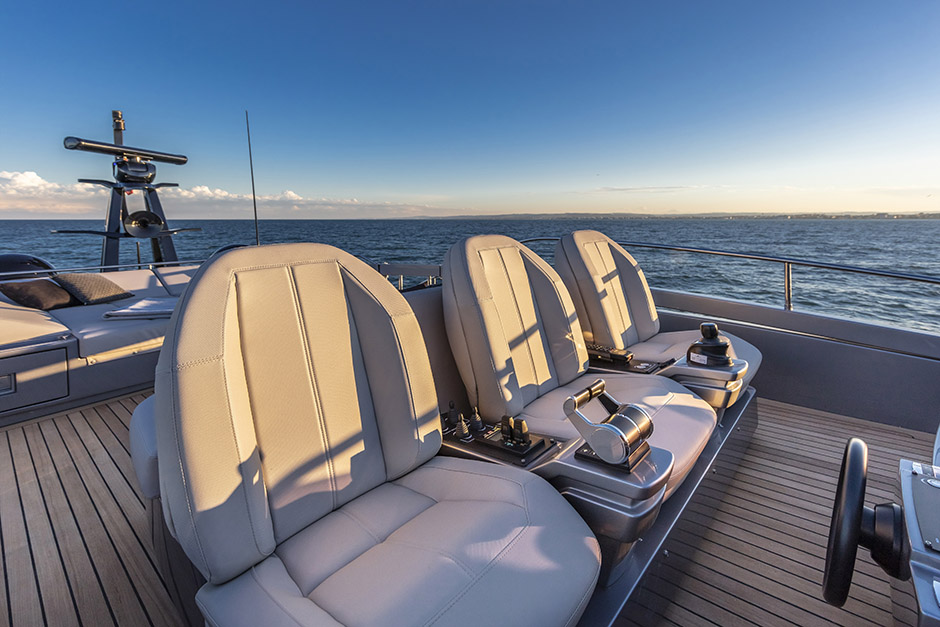 The sundeck measuring approximately 15 m2, free from stairs from the cockpit, offers generous spaces for relaxation thanks to a large 5 m2 sunpad opposite a sofa. The helm station is equipped with retractable screen, and all the exterior areas can be protected by biminis and sun canopies. The glass door onto the lounge transforms the main deck into a large open space of some 50 m2. Bathed in natural light, the main deck is organized into 3 separate spaces: lounge, dining area, and helm station. 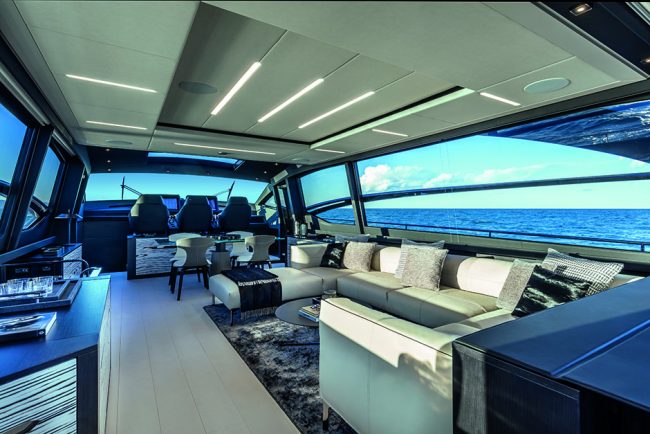 The double-side access, via two doors at the helm station, enables the proper distribution of flows with separation of the areas, offering the owner and his guests the maximum intimacy and privacy. In the lounge, a large C-shaped sofa with chaise longue is situated on the starboard bulwark, with the TV opposite integrated into the cabinet, which opens with a sliding and rotating mechanism. 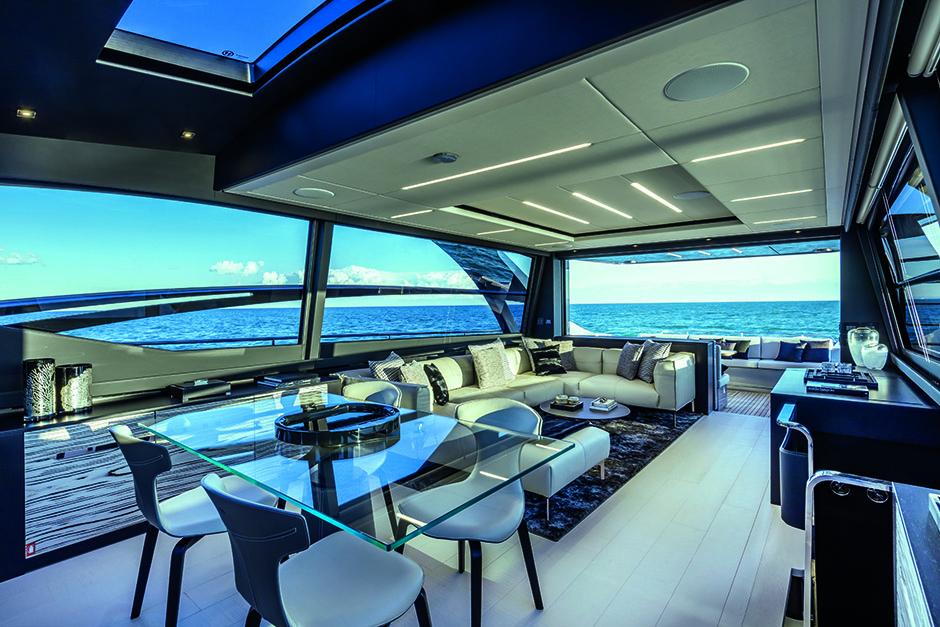 The dining area features a table for eight and low cabinetry on the two bulwarks. Beyond this area, the helm station, magnificent in its form and practicality of use, is a masterpiece of design, surprising in its elegance, technology, and sportiness. 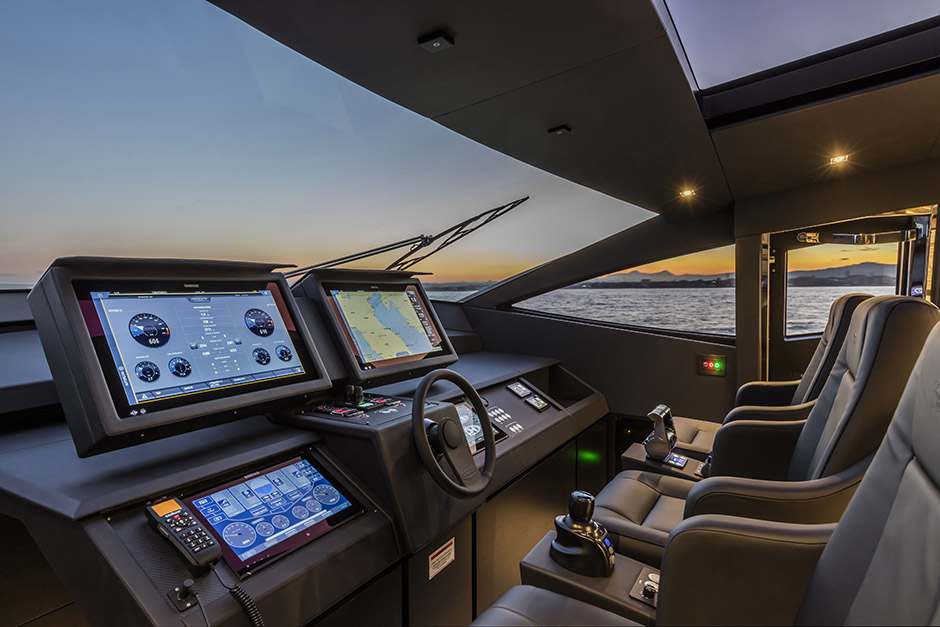 Co-designed with Poltrona Frau and upholstered in “Interior in Motion” leather, it is comprised of three independent chairs, an integrated bridge, and a windshield with no uprights, even larger, created using an innovative technology of glass tempering, providing total visibility. A large dark glass sliding roof above the control station further accentuates the sporty nature of the 8X. 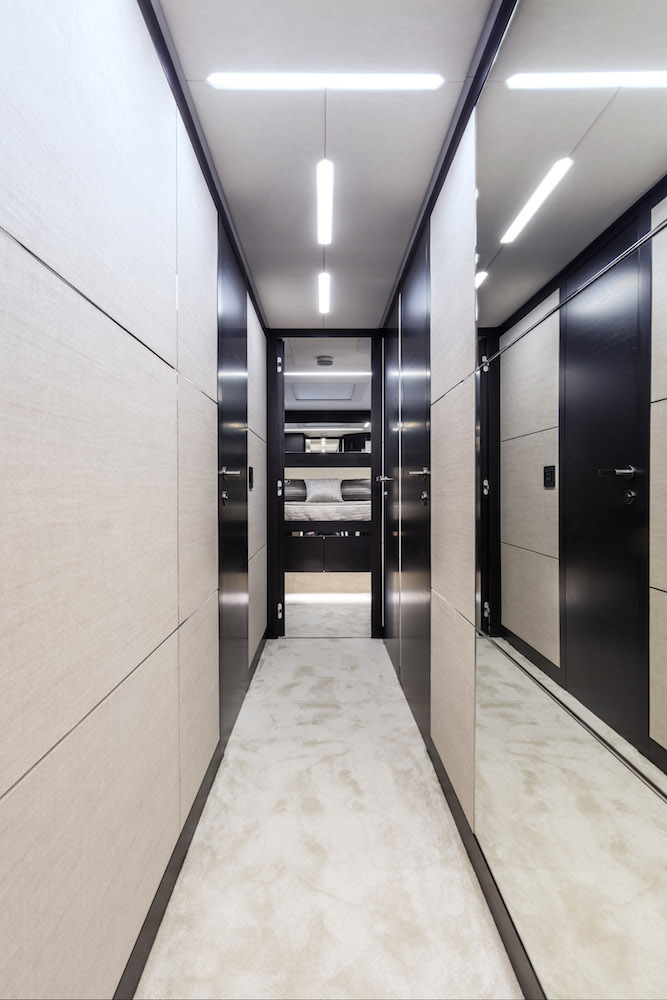 The port side of the helm station provides access to the lower deck, where a central corridor regulates the flows to the 4 cabins. From the full-beam master cabin amidships to the foredeck VIP cabin with dedicated bathroom on the left, and on to the two guest cabins along the corridor, both double with the possibility to have a pullman bed, sharing the bathroom to starboard. 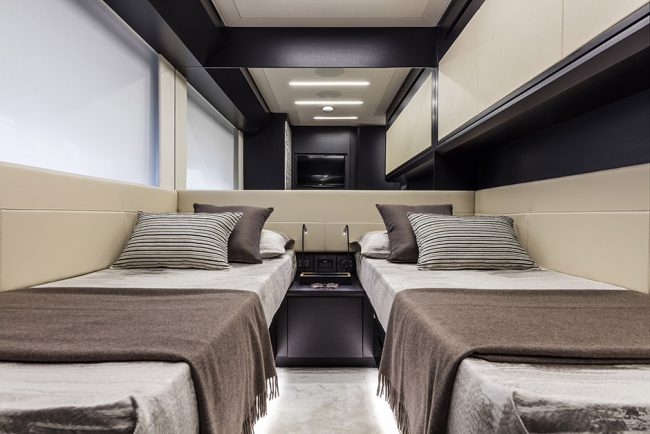 The owner’s cabin is noteworthy, reaching 20 m2 in width and furnished with a large central bed measuring 180 x 200 cm, at the back of which, to port, is the walk-in closet and to starboard, the bathroom. This configuration is designed to guarantee greater acoustic insulation from the engine room, situated a full 5 meters from the guest zone. A chaise longue to the left and a vanity complete the furnishings of the space, enhanced by a number of storage compartments and a TV facing the bed. 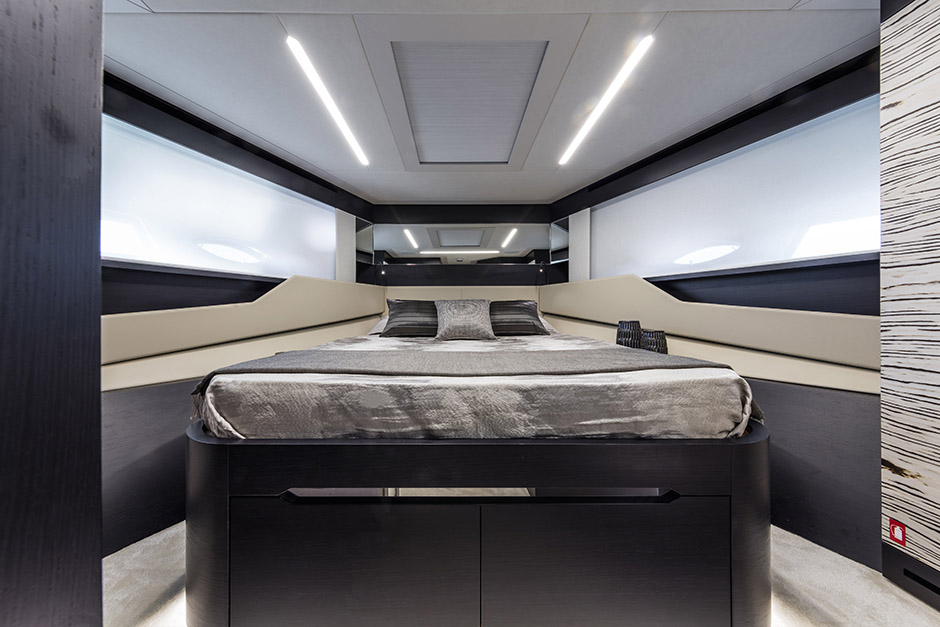 Aft on the lower deck is the galley, lit with natural light, accessed via a stairway on the port side of the main deck. Here, to ensure greater privacy for the owner and his guests, a sliding door can isolate the galley completely from the crew area, composed of one single cabin and one double cabin that share the bathroom with separate shower. The crew can access this area directly via a door in the cockpit, without having to pass through the galley. Access to the engine room is also located in this area. 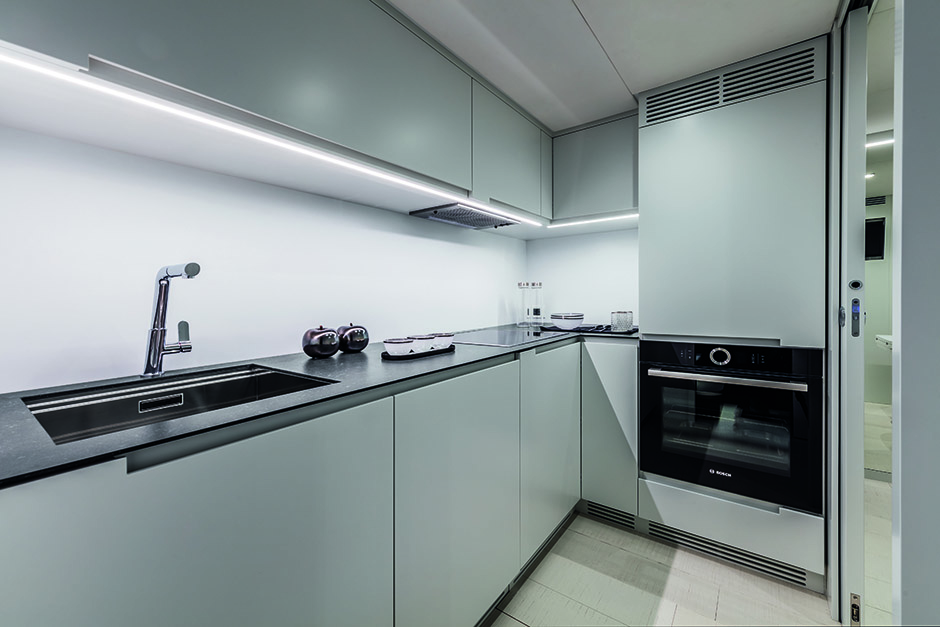 The headroom in all the areas on deck and belowdecks exceeds 2 meters.The new Pershing 8X model features an innovative new element not only for the brand but for the entire pleasure craft industry: the Music ∙ Hull, which makes it possible to listen to music underwater during dive sessions or while swimming. This is a new way to experience relaxation in the sea with a listening quality never before achieved. 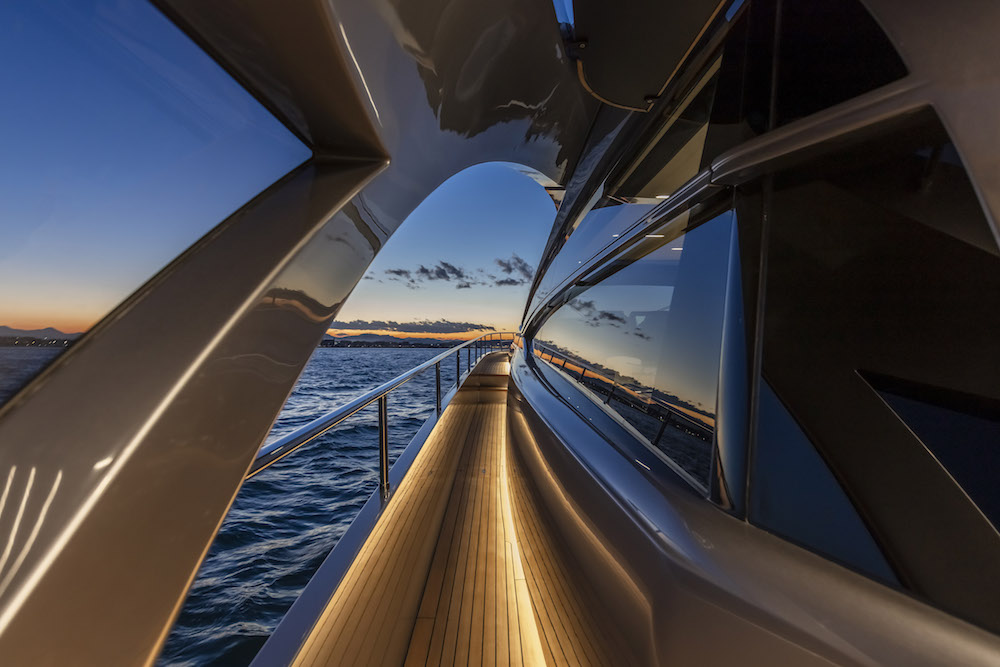 This innovative solution, developed by the Ferretti Group Engineering Department in collaboration with Videoworks, transforms the hull itself into a high-definition loudspeaker. Music Hull is controlled via the VOTIS infotainment system, which combines the remote controls of the devices in a single support and is expandable to the automation system in all the spaces. It can also be controlled by the owner and guests on smartphones and tablets. 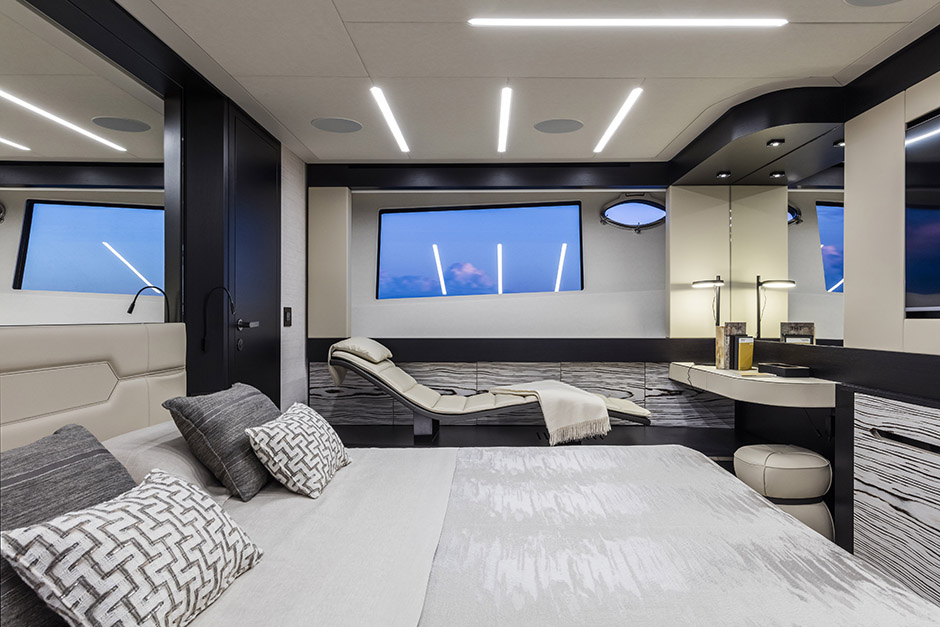 The standard engine configuration of Pershing 8X comprises twin MTU 16V 2000 M96engines delivering 2435 Mhp each, combined with TopSystem surface drive propulsion with surface propellers. The vessel reaches a top speed of 45 knots and cruising speed up to 38 knots, with maximum range of 320 nautical miles (preliminary data). In continuity with its predecessor Pershing 82, this model as well offers the option to install – present on the first unit – twin 2638 Mhp MTU 16V 2000 M96L engines with which Pershing 8X can reach and exceed 48 knots, guaranteeing a full 41 knots of cruising speed (preliminary data). 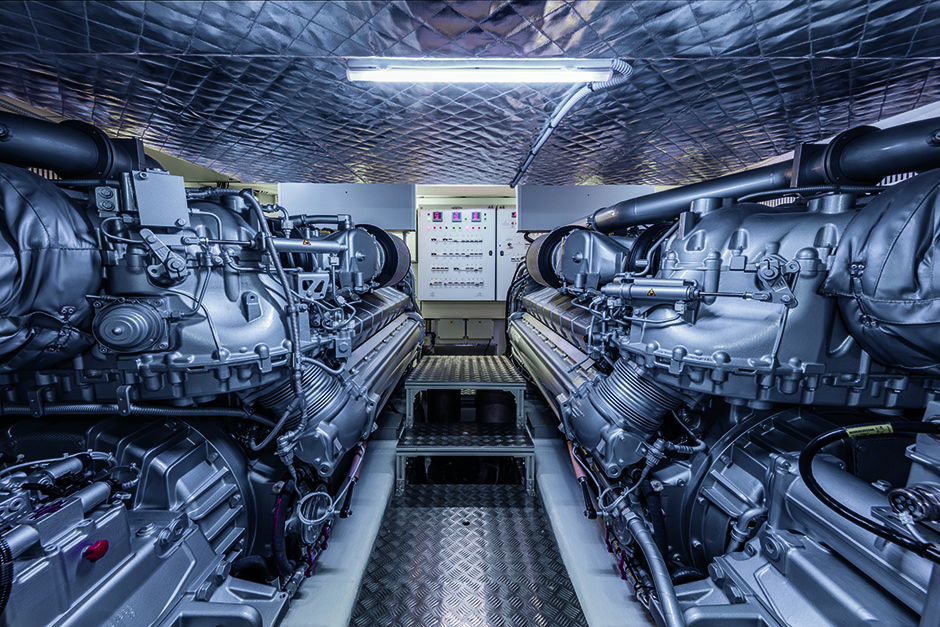 As seen on Pershing 9X, the 8X model will also install the groundbreaking system that integrates propulsion control with the manoeuvring, navigation, and monitoring systems. The Ferretti Engineering Department, along with a number of the main partners of the Group, has implemented cutting-edge solutions that offer owners and captains an instrument that is both highly evolved and intuitive, providing total interaction between engines, on-board instrumentation, and automation functions. 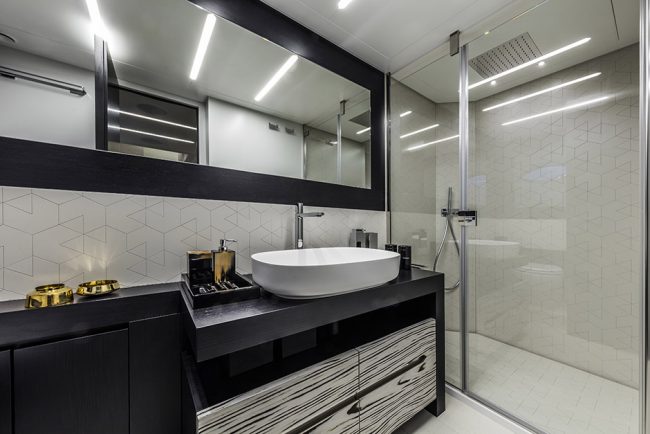 The integration of the control and interface between engines and drives is supported by a platform jointly developed by Top System with Onyx for the EasySet system and Xenta Systems for the advanced electro- hydraulic steer by wire system, supported by the Naviop-Simrad LOOP for the navigation and monitoring systems. All this is integrated and accessible to the pilot via large natural carbon panels and touchscreen monitors up to 24”, framed in Poltrona Frau leather. 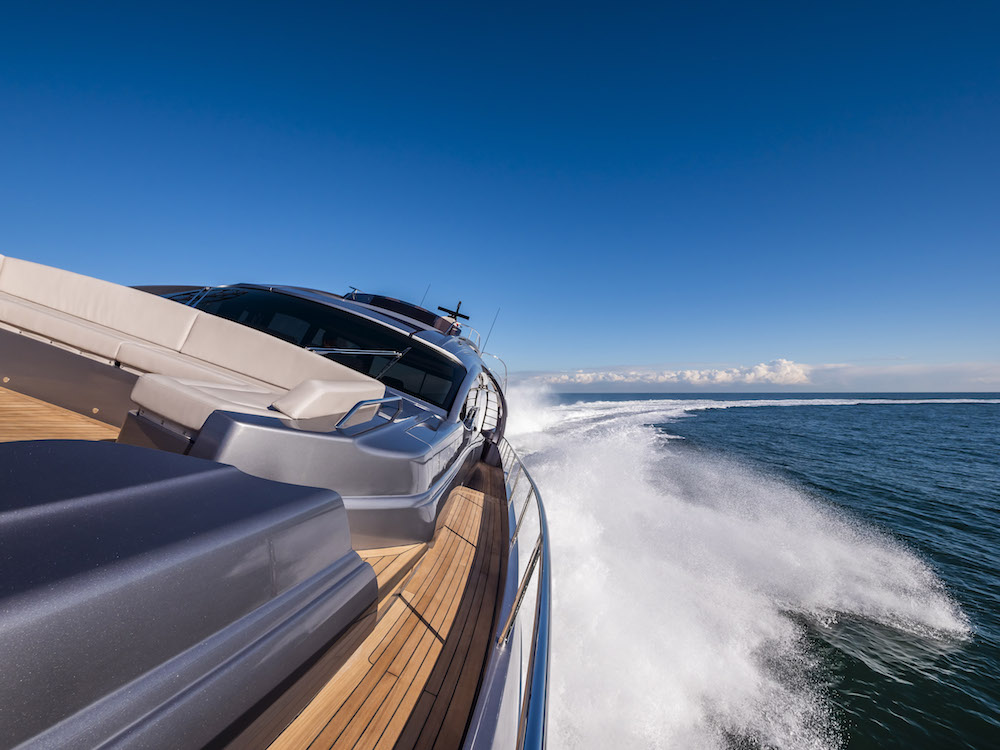 On request, the owner can install the propulsion package resulting from the longstanding partnership between Pershing and Top System, which offers a new version of the EasySet system that stems from the experience developed on-board the latest Pershing models, optimizing trim and performance during navigation, although it can be bypassed at any time in favour of manual control by the captain. 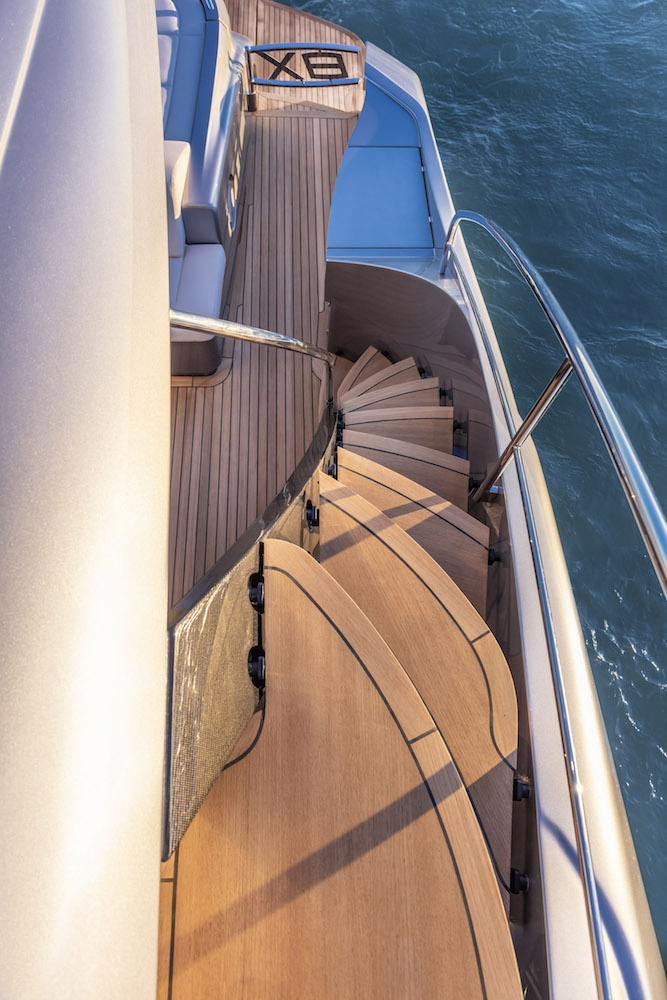 The package also includes an innovative joystick function coupled with the surface drive system, which along with the new features and benefits of easy handling, enables a level of manoeuvrability in port and in tight spaces that is nothing less than revolutionary for surface propeller propulsion. Added to all this is the new DPS (Dynamic Positioning System), which makes it possible to maintain the vessel’s position even in conditions of strong wind or current, a perfect solution for preparing for mooring or while waiting to refuel or for a bridge to be opened.