If you count all the Jeanneau Sun Odysseys and  Bénéteau Firsts, Philippe Briand has designed over 12,000 boats in all.
An astonishing achievement. However, the fact that the designer was born in La Rochelle, the cradle of French sailing, and raised by a father who was an Olympic Dragon sailor, ensured that sailing and competition would be in his blood.

“When I was still very young I realised that being good wasn’t enough to win a regatta, you also needed to have the best boat,” Briand declared in a recent interview. “So I started to get interested in yacht technology and design. Winning wasn’t enough for me – I wanted to find the absolutely best way to do it”.

Briand sketched out his first boat at 11 and his big chance came at the tender age of 16 when he was given the opportunity to pen an IOR Quarter Tonner for a yard. “It was a wood-built 25 footer for a yard in Alicante,” he explains. “The design worked and won several regattas with the result that 11 examples were built”.

Two years later, young Philippe washed up in the studio of Swedish yacht design and sailing great Pelle Peterson, who introduced him to the America’s Cup, a move that greatly influenced his career.
In 1978, Briand hung out his own shingle and his studio is now based in Chelsea in London.

In the interim, he has produced one stunningly successful design after another. In fact, the Frenchman is one of the select few America’s Cup designers, crafting eight different Challengers, including French Kiss and Ville de Paris, between 1986 and 2000. This bolstered his reputation, of course, and his first pleasure superyacht commission soon arrived. The 44.7-metre Mari-Cha III was deemed so successful that she was followed a few years later by the 42-metre carbon-fibre Mari-Cha IV, holder of a still-unbroken Atlantic record of six days, 17 hours and 52 minutes, set in 2003.

That said, Briand has never rested on his laurels. He is constantly seeking out new challenges and is frank about what drives him: “I just love competition. Not just at sea but also at the drawing board. That’s what motivates me most, in fact. I will often look at boats and think: ‘I’d like to design something better than that’. My focus could be performance, comfort or elegance. But my overall goal never changes – I want to create something that improves on what has already been designed,” he concludes. 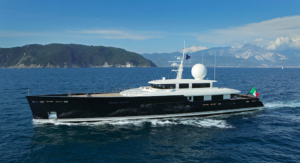 His greatest challenge so far, however, has been the Vitruvius brand, a collection of motoryachts with sleek, tapering lines and featuring great swathes of glazing, a signature of Briand’s output of the last 15 years.

“I’d never tackled designing a motoryacht before,” he explains. “But it was immediately clear to me that if I wanted it to be successful, I’d need to come up with something completely outside the box”.  The result was Exuma, the first yacht in the Vitruvius series. “We were extremely fortunate with our first motoryacht,” Briand continues. “We took a model to the 2006 Monaco Show and the owner was drawn to it instantly. He just got the philosophy right away. He was an expert yachtsman who’d already taken a motoryacht around the world. He did admit he felt he must be completely mad to trust a designer that had never produced a motoryacht before, though! Exuma now has over 75,000 nautical miles under her belt and we’re great friends”. 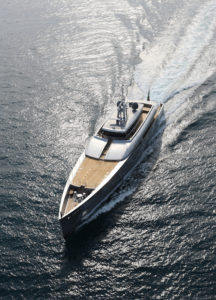 The Vitruvius line continues to grow. An 80m is in build at Turquoise but an 60m for Feadship and a 105m for Oceanco are also both in the works. A 25-metre trawler design for a French yard is in the pipeline too.

All are serious boats for serious yards. But success has not gone to Briand’s head: “Superyachts are our showcase, but most of our business is production boats, a large proportion of which are for the Bénéteau Group. We have over 30 models building and although megayachts are vital to developing and testing new technologies, we remain a predominantly production boat studio. But they are testing too because the real challenge is inside us,” he concludes.