I don’t need to affirm my identity as a designer. But I do have to drive forward each owner’s concrete idea of what a boat is.  It is his idea of what the boat should be that has to take shape, not mine”. The words off Alberto Simeone, the son of the great Mino who designed and built a successful series of Half Tonners in the family yard back in the 1980s. Simeone Junior’s career in yacht design, however, only launched after some serious experience in civil architecture. “I worked on the Perugia light urban rail system, the Minimetrò,” he tells us. “It was a Jean Nouvel project and I was chief of civil works. Managing a job that size was absolutely fundamentally important to developing a working method”. 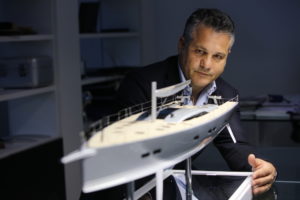 In 2003, Simeone joined forces with Mauro Montefusco and Mario Sassi to found the Mylius yard which racked up its game still further in 2011 when Luciano Gandini joined as chairman. Simeone’s design approach remains pivotal, however.  “You have to keep control of the project from start to finish. That’s the only way you’ll get a complete result. It’s the balancing of a project in which you know every single component is the work of the same hands. 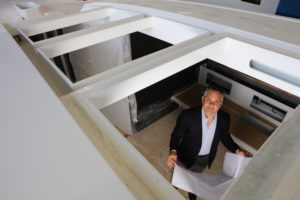 I would go so far as to say that is Mylius’s signature and philosophy”. Simeone’s design work always begins with a commission from an owner. The new Mylius 76, a 23-metre available as a flush deck or deck saloon, which joins the four existing models, the 50, 55, 60 and 65 footers, was no exception. “The first 65, a flush deck, will arrive soon in the yard. We have developed the interior in cooperation with the architect Aldo Parisotto. A friend it is very interesting to talk to” explains Simeone. “But, coming back to 76, the request came from a very experienced owner with a round the world to his credit and he wanted a boat to do it again. I listened to his requirements. Then we talked about the various aspects. I presented him with a very rough draft of a boat and we talked some more. Mediation was what gave us the right boat in the end”. 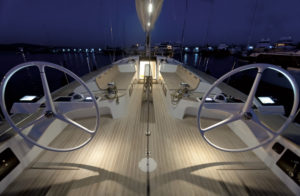 After the discussion comes what Simeone thinks of as the sculpting phase. “The boat has to be modelled in space. But first, I study everything that’s been done. I really don’t believe in eureka moments. I believe in research, observation and intuition. And in experience. I believe I started off as a boy, watching my father designing away”.

That approach first bore fruit in the Mylius 11e25 which caused a furore at the Genoa Show in 2004 because of the big sun pad aft of the helm station. “Where do want your friend, your partner, when you’re at the helm? Nearby. But boats also always have to be balanced. So you need balanced choices”. That sense of balance is exuded by the just-splashed 76 Deck Saloon. “For us here at Mylius, the 76 DS is a very important boat. Until now, yachts had very linear decks with low deckhouses. This DS is a major advance on a design level because the deckhouse is the boat.

It sets it apart, it characterises it. It creates that interplay of full and empty spaces that gives the boat its image. You always have to be able to debate and debate to refine your choices. Until you bring together all the elements of the boat. In fact, I feel that is the whole aim of design. It’s also the Mylius philosophy”.