Mario Pedol, who followed Nauta Design 30 years ago with Massimo Gino, never deviates from the same design process regardless of whether he’s penning a yacht or something entirely different. “We were lucky enough to work with Renzo Piano on the design of his Kiribilli (a Nauta/Reichel/Pugh 72’ splashed in 2007, ed.’s note),” continues Pedol, “and we saw that even in great architecture, the values and procedures are the same”.  But the Milanese studio got off to an unusual start. 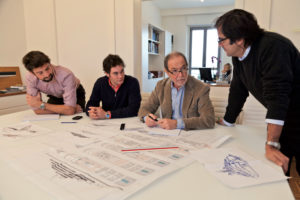 “Between 1989 and 1992-1993, we were building as well as designing and that gave us the kind of experience and store of knowledge that make the difference. We know exactly what is actually feasible and what just looks good on paper”. Ah yes, paper. Thirty years ago designs were actually drawn out on paper and that made even the smallest line difficult to change. “Now it just takes a click of a mouse. Modern design tools have changed and democratised the market. 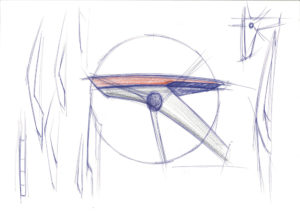 Computers definitely have more advantages than disadvantages. But what still makes the difference is the ability to pick your priorities, intelligent design, your ability to interpret trends, the market and your own culture. The ability to intuit and chose the best from an aesthetic and form-function balance stand point. A computer just can’t do that”.

That’s the kind of talent that won Nikata, a Baltic 115’ clothed in Judel Vrolijk waterlines but with a general concept, exteriors and interior design by Nauta, a shelf of international awards. “Nikata,” says Pedol, “proves what you can do using new materials on a cruising sailing yacht that hit 29 knots at full load during an Atlantic crossing”. The sailing world abounds with one-off projects but there are also plenty of production models out there too.

That fact has allowed Nauta Design come to the motoryacht side of the market with a whole new take.  “We had no preconceptions and we took a very free approach to the subject, offering a different onboard lifestyle made possible by interior-exterior contact in terms of connection between the spaces, the quality of the transparent areas and by focusing on reducing the yacht’s visual impact as it moved through the sea”. The result was Project Light, a Fincantieri 80-metre that proved something of a turning point for the entire sector in 2006.  “It marked the start of a whole new trend and we were the forerunners”.  A trend that put the emphasis on improving the relationship between interior and exterior and which produced, amongst others, the Bénéteau’s innovative Sense series as well as the Cantiere delle Marche’s Nauta Air motor range.

“In just 33 metres and three decks the new Nauta Air 108 proves you can work in that direction and that you really can get into contact with nature. Plus that the greatest luxury of all is time spent at sea”.  Equally, Nauta Design’s aim in the sailing segment is to increase dimensions whilst retaining all the characteristics of an authentic sailing vessel. “We are working on an over-70-metre. A project with very strong design content and very ambitious goals. That said, the challenge will be the same as it ever was: to ensure form and function coexist. I think it is one of our the key factors in our success: neither one dominates the other. It is that mix that produces quality. But I have to confess when I’m staring at a blank page at the start of a new design, form does pass first through my mind: I want it to be a beautiful boat”.