“We’re already thinking about a larger version of this very successful model, in part to ensure we retain our leadership position in the explorer segment – we were the first yard in Italy to get into it, in fact”.   Sanlorenzo sales director Antonio Santella is a man firmly focused on the future. At the 2015 Monaco Yacht Show, the Massimo Perotti-headed yard unveiled Moka, its first ever Sanlorenzo 460EXP.  In March 2016, it splashed the second and a further three are currently in build with delivery dates penned in for 2017-18. 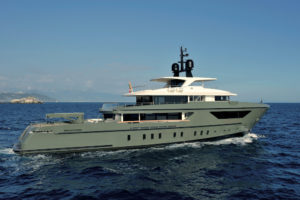 The Sanlorenzo team has plenty to be proud of these days and are riding high on the success of a yacht that was a courageous choice at the time. “The concept,” explains Santella, “dates back to 2012 when we were bang in the middle of the economic crisis. But we’d spotted a niche market for explorers and we invested in it. We’ve been proved right: you can see that from all the attempts to imitate our explorer!” 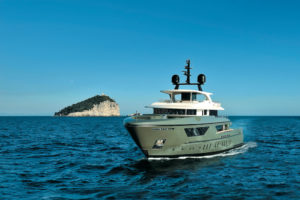 The Sanlorenzo 460EXP is the product of a very specific endeavour as Francesco Paszkowski who crafted its exteriors is keen to point out: “The idea was to unite the technical peculiarities and aesthetic of a working vessel with the space of a luxury yacht whilst still retaining the Sanlorenzo family feel and with a displacement of under 500 tonnes”. 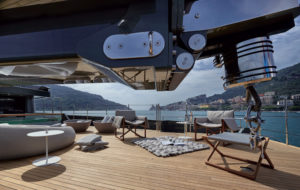 The 460 in the new 42.78-metre’s moniker actually refers to its GT while it has a beam of 9.2. “We really concentrated on the volumes,” Santella says. “So it’s a compact boat with all the management and running advantages that implies yet it has the volumes of a 50-metre”. The 460EXP is designed for people that like to immerse themselves completely in seafaring life because of its crossover ethic. “First and foremost,” explains Paszkowski, “the vertical lines with raised walkways and deckhouses are specific to working vessels as they have to be able to negotiate all sea conditions. 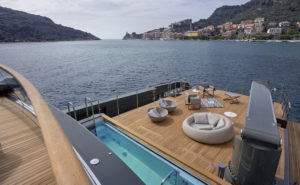 But from the pleasure side, we have aft deck spaces that can accommodate all kinds of toys and also double as a large chill-out area with a pool. Another pleasure boat-derived feature is the windows that brighten the interiors”. Moka’s interiors won her the Judges’ Commendation for Design at 2016 Superyacht Design Awards. At the owner’s request, they have a contemporary, maritime feel. 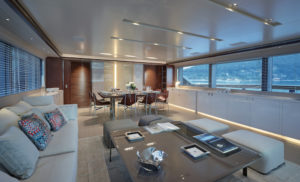 “A style that dovetails perfectly with the spirit of the 460EXP,” explains Sandro Chiavetta, chief designer at Sanlorenzo. Spread over four decks plus a sun deck, the Sanlorenzo 460EXP features two innovative elements. 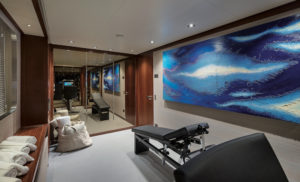 “Amidships on the lower deck, which has a bar and beach club,  there is a gym and a third VIP cabin which has been added to the two other guest two-berths. Because this cabin is located behind the crew quarters, it can also be used as an extra space for them on long passages (even though they are already three crew cabins, ed.’s note)”. The main deck features two larger saloons and the full-beam owner’s suite forward. 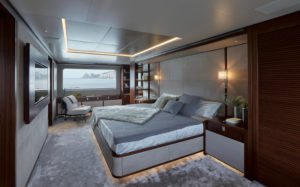 The upper deck is home to the bridge, the captain’s cabin and a lounge with an al fresco terrace. “The colour palette for the spaces is inspired by maritime tradition and was developed by the Sanlorenzo style office,” continues Chiavetta. 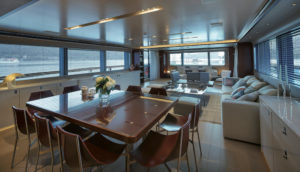 “They started with the classic red of sapele mahogany and by contrasting it with the more contemporary bleached oak, created a palette of warm tones that is combined with brushed steel finishes and, on the passageway walls, rope-print leather”. Italy’s finest designer brands provided the furnishings and accessories. Paola Lenti collections are featured on deck with Minotti dominating the interiors and Ivano Redaelli providing the linens. “That’s how we achieved such relaxing, comfortable interiors with artworks by Peter Botos also adding a prestige note,” concludes Chiavetta. 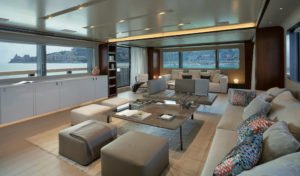 Moka has been awarded RINA Green Plus notation and is virtually vibration and noise-free. “You can’t compare this yacht with anything else out there. She’s really quite unique,” concludes Santella proudly. “She’s the kind of vessel that’s perfectly at ease anywhere, be it a VIP marina or a remote bay. She’s designed for people that want to really experience the beauty of the sea. Regardless of where they are in the world”.