Courage, enthusiasm, brilliance and tenacity. Plus a good dose of geniality and an even larger one of farsightedness.  Valentina Magnolfi and Federico Santa Maria may be young but this pair of yacht designers have all of the aforementioned qualities in spades. 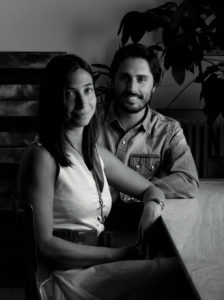 Even the way they ended up becoming partners is intriguing: their paths crossed not at university but at Wally Yachts where both had chosen to work as soon as they’d finished their studies in architecture and yacht design respectively. That choice alone  says it all about their approach to yacht design. 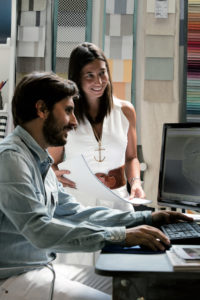 Their ultra-severe sailing and motoryachts are clothed in strong, innovative lines that make no compromises. A powerful departure from classic fare that never trample tradition. This is a duo who’ve known their path in life since an early age: Santa Maria’s first drawing in primary school was of a Riva 38 and both he and Magnolfi see boats as living things into which they’ve poured something of themselves, often resulting in animal-like forms. But their exuberance and passion for change is also proving something of a limiting factor just now.

“Our forms are a bit difficult to digest,” confesses Valentina Magnolfi, “Owners are intimidated by the untried and tested. They worry they won’t appeal to other people and that puts a brake on them.” Federico Santa Maria adds: “The yacht design market is quite a closed shop and not easy to get into, particularly for hard-hitters like ourselves.” However, things are starting to move now.

The duo’s 70-metre explorer Pangea was unveiled a couple of years back. Back then it felt a little like a concept designed solely to dazzle. But now it is starting to feel much more feasible and less like a utopian exercise.  “We even had an owner that asked us to design him a 50-metre version. Nothing came of it in the end but it was still very satisfying,” continues Magnolfi. 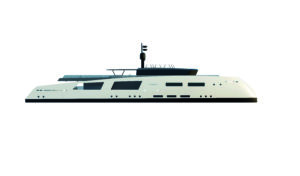 “Pangea was conceived as an idea of uniqueness in the endlessness of the sea,” explains her partner. It feels like he’s saying that something as fascinating as the Ocean deserves a little more than the usual hackneyed fare.  But if you look beyond her futuristic forms, Pangea does have more than a whiff of certain Northern European working vessels about her, particularly around the bow. So do Santa Maria-Magnolfi designs take any inspiration from existing craft? “Yes and no,” says Santa Maria. “Generally speaking, they’re products of our imagination but it’s undeniable that boats we’ve seen might influence us.  I have no problem with taking inspiration from other things and then mixing it all up together to produce a new idea,” he finishes. 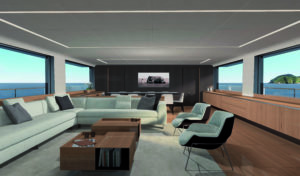 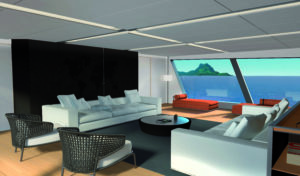 So what is their favourite boat? “The next one,” they both answer at once. “When we design a boat, the next one is always there in the background demanding to come out. But if we really had to choose one, we’d go for our 30-metre sailer,” confesses Federico. “A boat inspired by the old J-Classes that also borrows from the gozzos and really does the business for people that want a flush deck without having compromise on natural light in the living area”.

Thus far just one of the duo’s boats has actually splashed but a second craft on which they collaborated is in the works. The former is a Wally Tender built for Luca Bassani’s son and the latter is Lapo Elkann’s Lap 1 designed by Francesco Paszkowski and launched by Baglietto on which Magnolfi and Santa Maria redesigned the interiors. Of course, both are much more market-friendly than their usual designs but the talented young designers are holding fast.  “We meet the market halfway by slightly modifying our designs to make them more saleable but without them losing their character,” explains Federico. “We don’t want to give in to market forces as we would risk becoming fossilised on designs that don’t belong to us,” adds Valentina.  “We’re holding out and hoping that sooner or later the market will evolve enough to appreciate what we do”. Lapo Elkann has also asked them to design a 40-metre explorer, a one-off which if it is built, will make a huge impact. 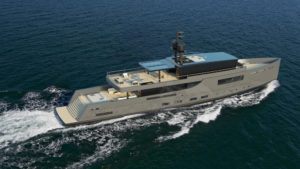 But the duo’s dream remains, as ever, to see their yachts plying all the world’s seas.