Sanlorenzo takes a new step forward alongside some of the most prestigious Italian architects and designers, choosing Piero Lissoni for the interior design of the first yacht from the new crossover line SX88. The model  will be officially presented next September at Cannes Yachting festival.

A leader in its own field, over the years Sanlorenzo has built a very precise, coherent model, bringing the concepts of architecture and design literally on board firstly by collaborating with Dordoni Architetti and subsequently with Antonio Citterio Patricia Viel for the yachts’ interior designs. 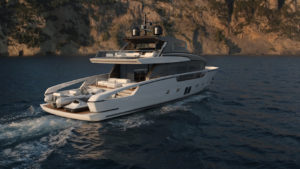 Setting out to escape from the values of an extremely traditional world, Sanlorenzo thus founded a brand new way to conceive boat design: the work of these designers made it possible to introduce a language and some aesthetic codes from different fields into the world of yachts for the first time, a concept of home living interpreted according to one’s experience and style. 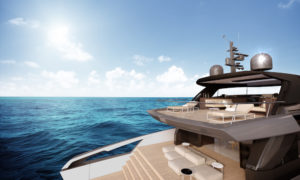 This choice allowed to lay the foundations for the collaboration with Piero Lissoni, thanks to the great stylistic and design affinity which immediately emerged between the designer and the company: “The timeless elegance of Sanlorenzo yachts and their simple language has found an ideal interpreter in Piero Lissoni”. Massimo Perotti, Chairman/CEO at Sanlorenzo. 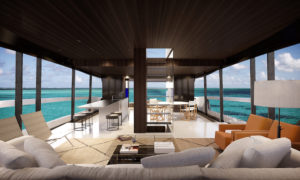 The project by Piero Lissoni for the interiors of the new yacht SX88 comes from a very simple idea: designing an open space boat. 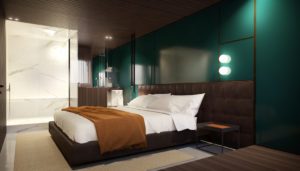 By using a totally innovative solution, Piero Lissoni re-interprets the concept of space inside the boat, which develops in a single, continuous setting from stern to bow, with an open kitchen, beside the dining room, followed by a living area with no interruptions between interiors and exteriors, thanks to wide glass walls facing the sea: “I keep picturing boats, even very large ones, as if they were lofts, that is very open, highly liveable spaces, which make it possible to be in contact with what’s around us”. 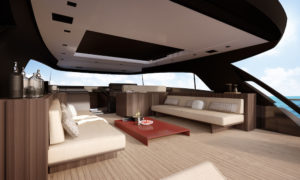 A “social” boat which offers a new way to live life on board. On the basis of the profile of this 27-metre vehicle, Piero Lissoni handles shape and function to create some sort of wide, tall sea-loft, with no rigid separations between the internal parts, thanks to a flexible layout: after the basic pattern has been determined, the project makes it possible to choose several modules, from the most extreme variation, an open space solution which represents the project’s primary code and that will be presented in Cannes, to other variations where some parts are closed. A space that can be easily modulated to fulfil every client’s desires and which, for the very first time allows to decide where the master cabin must be set up. 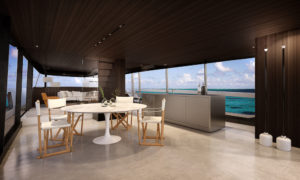 Another major feature of the project was the decision to remove all excesses of functionality inside as well as outside: removing all useless extra spaces and reducing technical spaces while favouring livableness indoors, the design of yacht SX88 uses all depths. All exterior areas show that every centimetre of the boat has been conceived to be used and enjoyed. 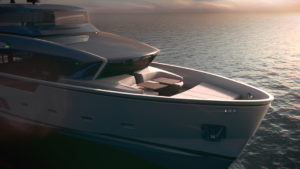 Piero Lissoni’s stylistic sign also emerges in the choice of furniture, which is a triumph of contamination: design ideas, icons of great masters, objects from the East and objects trouvés mix up to provide the setting with a domestic flavour. A key factor was the counter-current decision to not adapt furniture to space but to arrange it freely as in a home setting.

A major role was obviously played by Sanlorenzo’s collaboration with companies embodying the excellence of International design and which adjusted their products to the marine environment as far as technical features, materials and building solutions are concerned. Boffi has made a tremendous contribution in the field of bathrooms and kitchens. 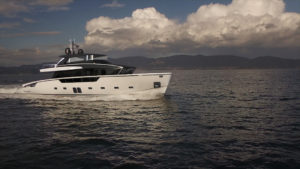 In line with Sanlorenzo’s policy, SX88 also makes it possible to customise yachts from the viewpoint of design and materials.

The palette of available colours and materials can be adjusted to the boat owner’s requests, so that each boat results in a unique creation. The interior design of yacht SX88 was designed by Piero Lissoni alongside David Lopez, Stefano Castelli, and Marco Gottardi.

The exterior lines are by Officina Italiana Design.