If you ask architect Enrico Gobbi what element best encapsulates the philosophy behind Prince Shark 50m, the man who founded Team for Design studio in Venice in 2005 will instantly reply: say “Those panoramic windows!” 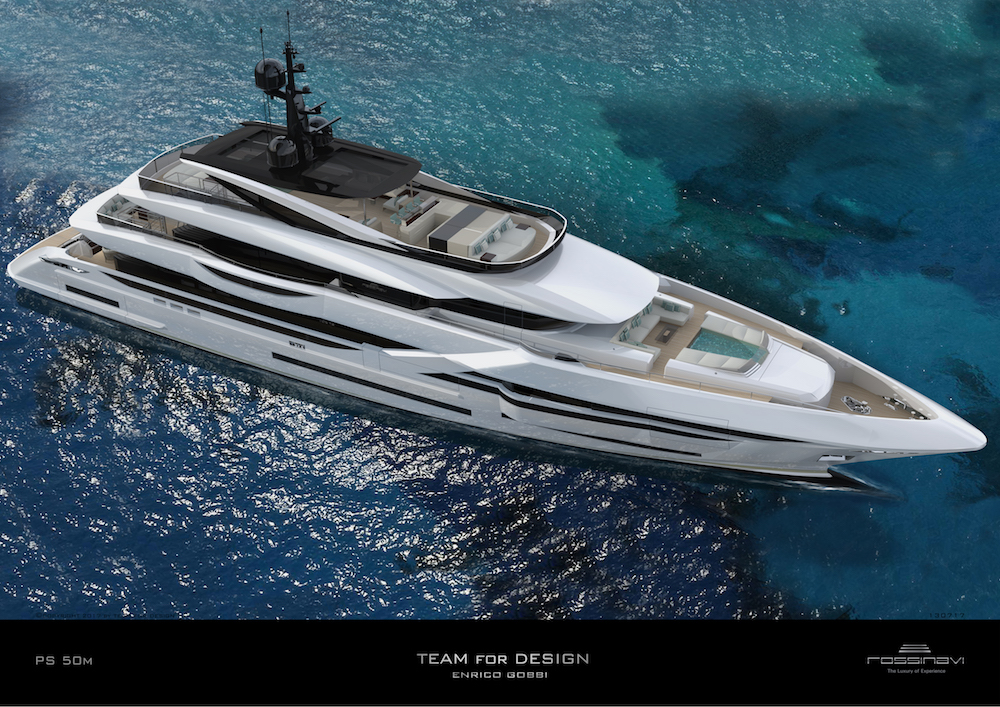 “Apart from brightening the interior spaces,” explains Gobbi, “the big windows were meticulously design from a styling perspective. So they really do play two very valuable roles. Even though this is a powerfully sporty yacht, they bring a sense of dynamism to the overall design.” He continues: “The windows are very long but elegant too – the way they develop along the unbroken surfaces of the superstructure creates a very clean profile. 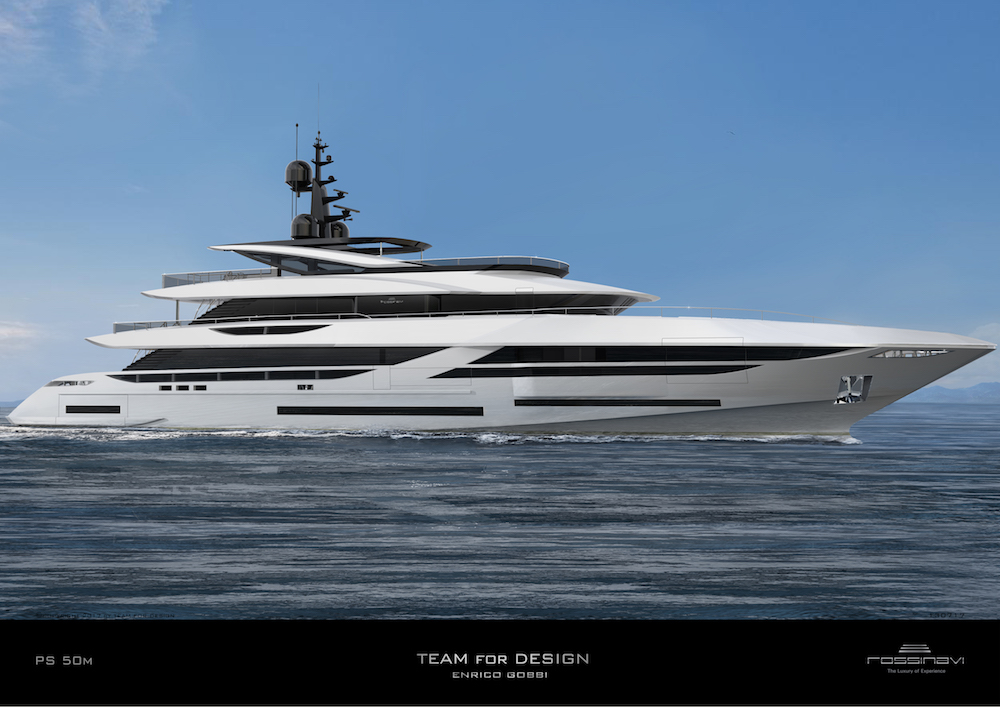 Their unusual shape actually makes the boat seem a lot longer than the other yachts in her category. Lastly, because the windows are so expansive, they really do meet the needs of today’s owners who want yachts with large openings that give into equally large interiors.” 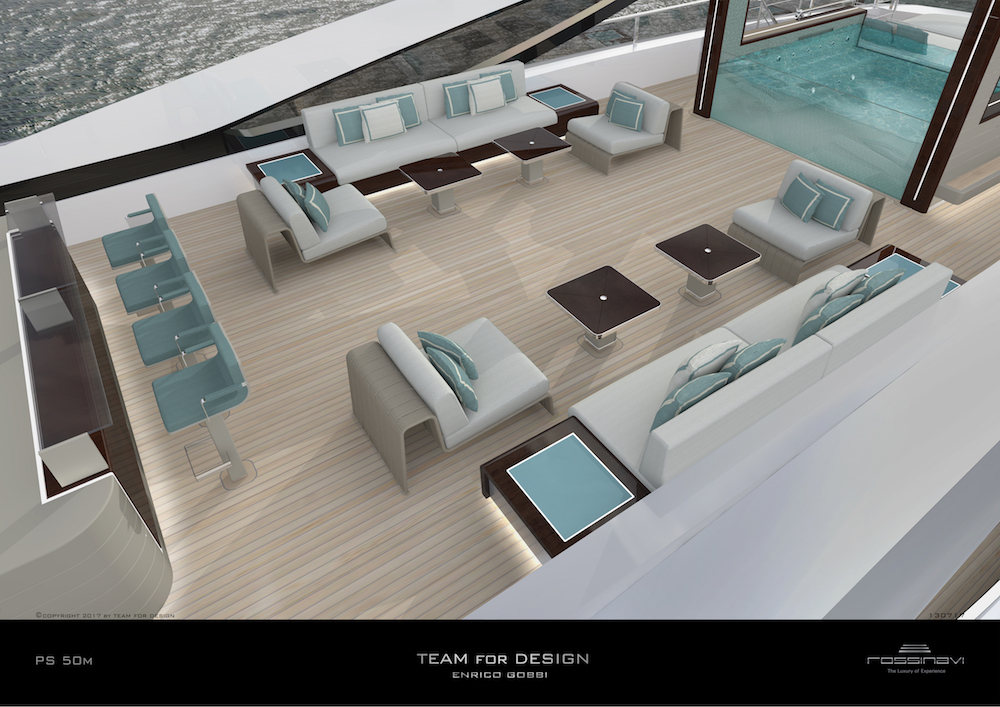 Based on the Prince Shark project that yielded three Rossinavi built examples, the new Prince Shark 50m thus has a well tried-and-tested naval platform which will really cut its delivery times.  In fact, it will take just two years to build – a very short period given its length. 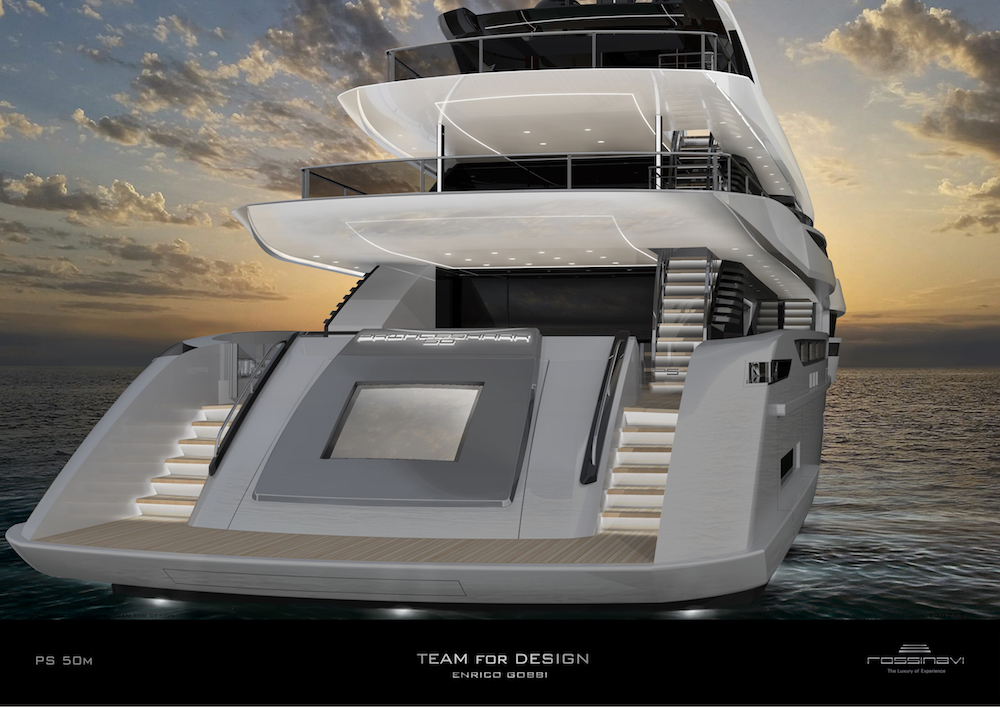 Stylistically-speaking, the Prince Shark 50m encapsulates two very different personalities. It is both a yacht dressed to impress in very elegant lines and also one with an aggressive side which is revealed in certain distinctly sporty, dynamic details. Not least, of course, Enrico Gobbi’s famous and signature long windows. Also in there is the flybridge structure which also has lots of glazing. “We kept the elements that characterised the previous Prince Shark design as they were very popular: the reverse-angled bridge windscreen. We describe it as military-inspired but it also guarantees maximum visibility even in the toughest of conditions.” 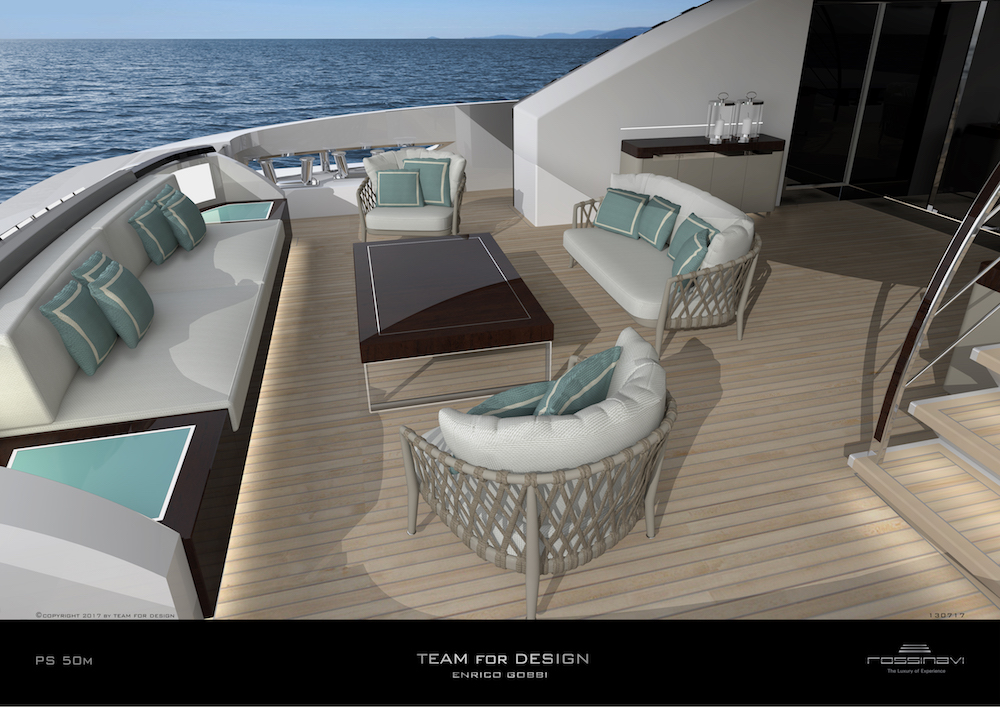 There are plenty of other styling cues too that underscore the yacht’s sportiness. One good example is the unusual superstructure grilles aft which are in black to delineate and highlight the angle of the windshield.

Spread over three decks plus a flying bridge, the Prince Shark 50m has a very unusual sun lounge area forward.  This is a large space dedicated entirely to relaxation with a generous C-shaped sofa which faces forward and is shaded somewhat by the overhang of the fly. Just ahead of it is a very spacious and spectacular hydromassage pool. 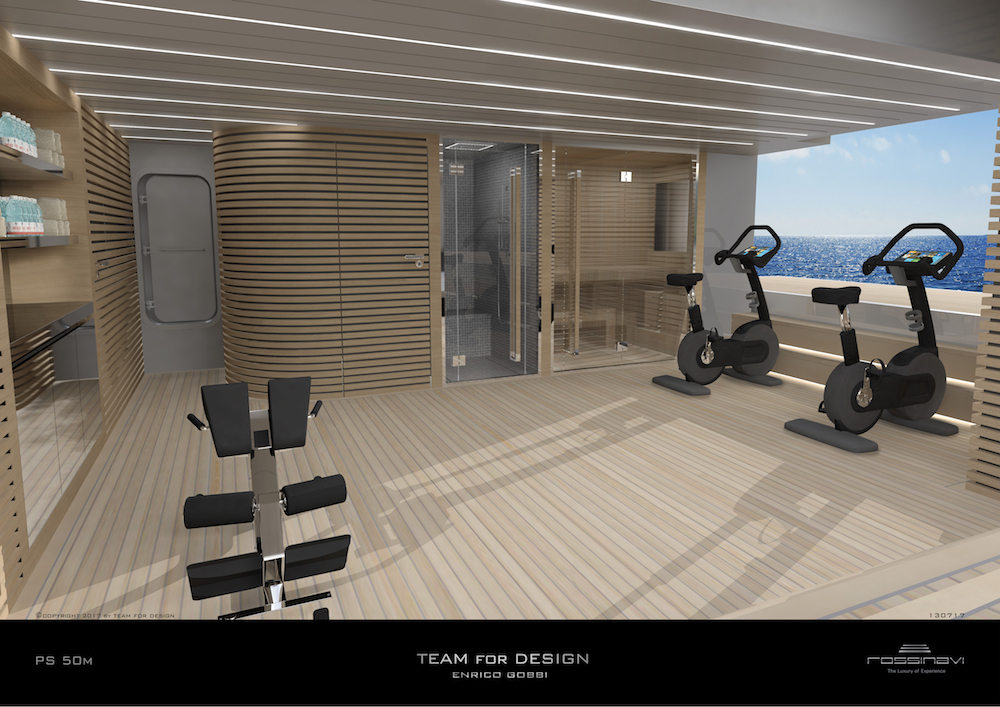 The latter’s forward wall is glass too to give guests genuinely uninterrupted views of the oncoming seascape.    Decorated with an Italian-made glass mosaic, the pool is surrounded by a sun pad area large enough to accommodate all the guests aboard and which also features beautiful mahogany detailing with stainless steel accents. 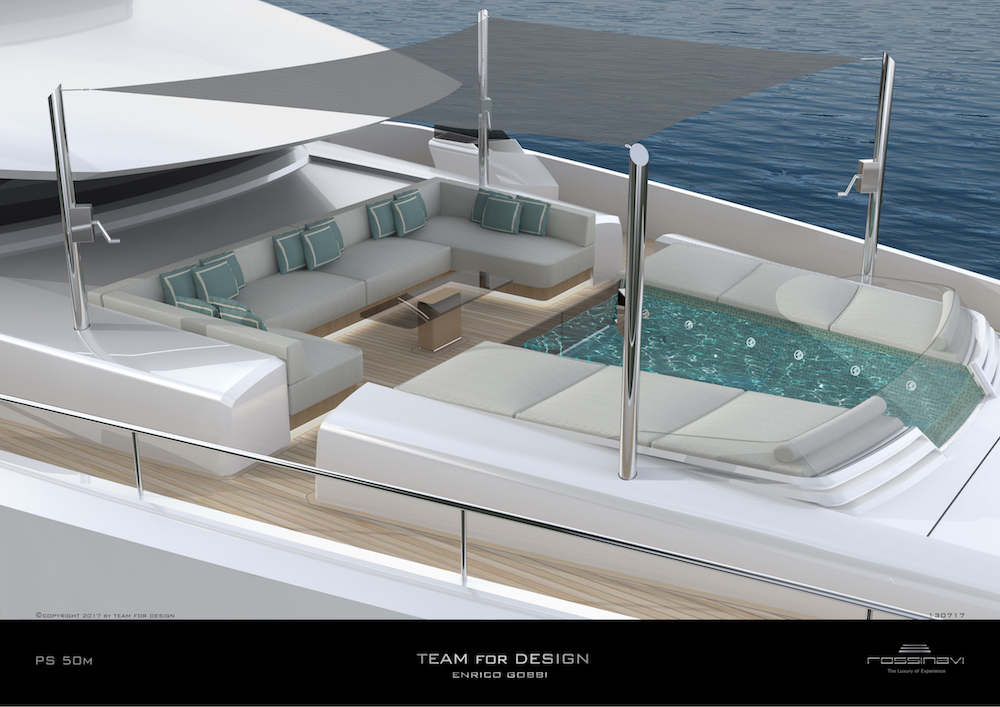 When it comes to fabrics and upholstery, there is an impressive choice from the leading Italian designer names. Another of the unique features of this new Team for Design project is on the lower deck: the beach club is created by opening up the transom which reveals a space directly giving into the gym area and the sea terrace that opens out from the side. This, however, is just one of two solutions on offer for the stern section. The other is the possibility of creating a conventional garage in this area. 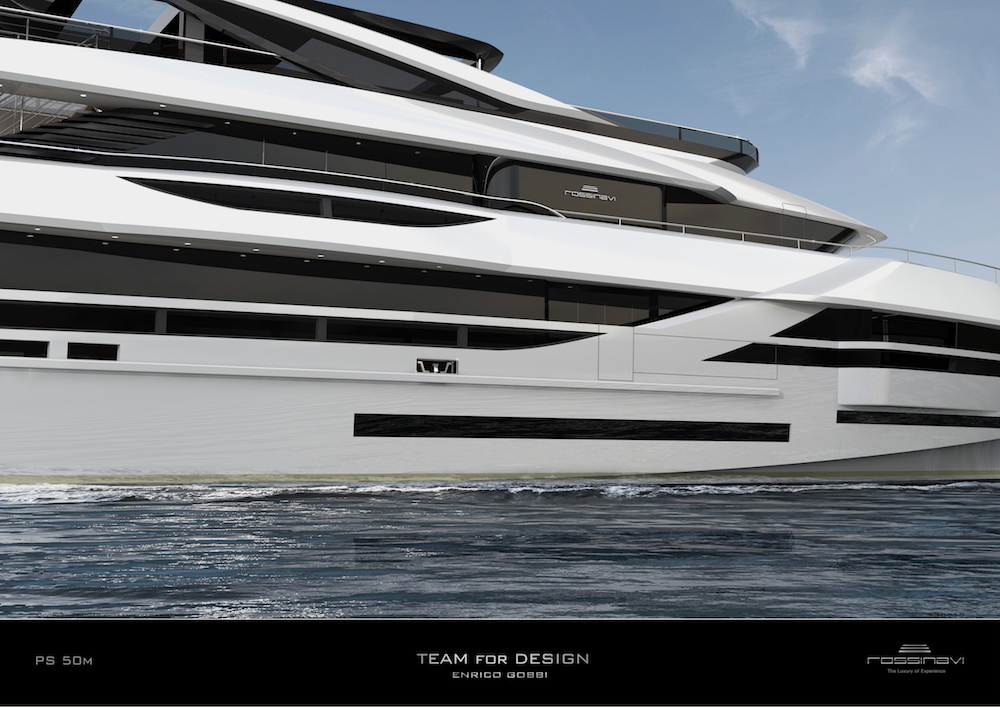 Another stand-out element of the Prince Shark 50m that was also carried over from the previous model is to be found in the master suite which is located forward on the main deck.  This is a balcony that opens out over the sea on the starboard side and corresponds to a bow window on the port side.  This creates a sense of much greater space in the master suite which aside from two bathrooms also has a large and spectacular panoramic central shower.

In addition to the owner’s quarters there are also four equally roomy guest staterooms. “By meticulously studying lines and forms, proportions and ergonomics, we created a megayacht that, although it has quite an imposing profile, still retains an elegance of volume. I don’t think that is a very common quality in yachts from this particular category. It is a quality we also sought to underscore still further with an elaborate lighting plan for the exteriors that took quite some time to perfect. It makes the new Prince Shark 50m instantly recognisable however and also highlights  the unusual styling details incorporated into the design.”