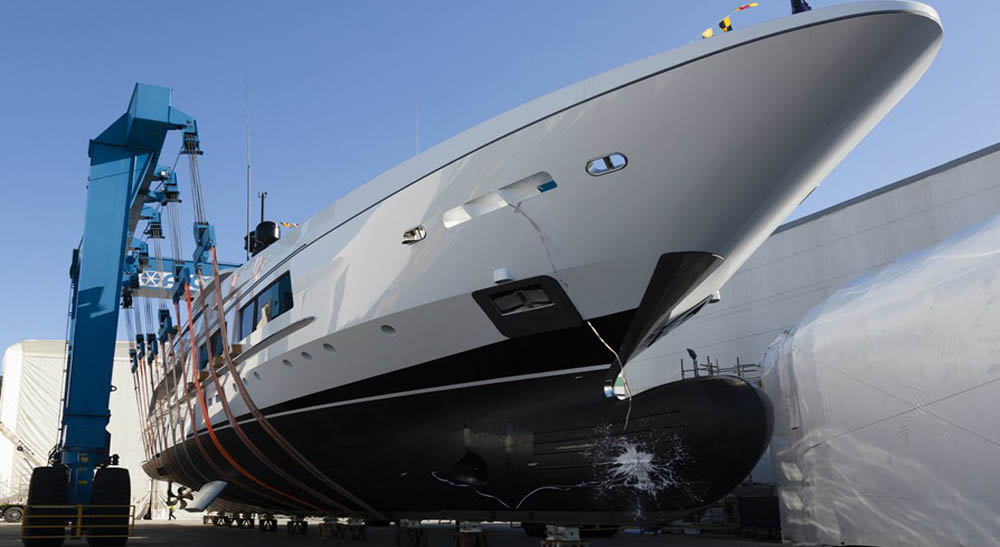 Baglietto’s latest creation was enthusiastically and proudly welcomed by the Owner, from Europe, all the shipyard’s workers, and several civil and military authorities who wanted to take part in this important event.
This 54 m steel and aluminium displacement yacht too has been designed by Francesco Paszkowski Design, who took care of both its exterior lines and interiors, the latter in cooperation with architect Margherita Casprini. Naval engineering is by Baglietto’s Technical Department, while project management was under Wim Koersvelt’s responsibility.

This new 54m vessel was built using Baglietto’s extensively tested platform for 53 m yachts – which can boast the construction of some outstanding crafts like the Blue Scorpion, the Gitana, and the Baraka – and features the solutions and stylistic elements that have made the brand’s international success over the years. Its aesthetic features are also serving as a ‘preview’ for the restyling that will characterise the 43 m, 48 m, and 55 m yachts currently being built at the shipyard, as well as the forthcoming 58 m and 62 m projects.

The brand’s displacement line is soon to be joined by FAST planing yachts, which stand out for their streamlined, aggressive profile.

Indeed, in April the first 46 m model will be launched, which is bound to represent the La Spezia-based boat builder at next year’s international boat shows. The FAST line will also include an entry-level yacht, around 36 m in length. While the two aforementioned lines are Baglietto’s core business, the brand is also working on the MV range – a modern reinterpretation of historical underwater assault vehicles -, confirming the MV13 and introducing the new MV19, which is currently under construction at the La Spezia new plants and is expected to be launched in Spring this year.