“She’s neither a sailing yacht nor a simple motoryacht – she’s both those things at once” is how  Marc Van Peteghem and Vincent Lauriot Prévost describe their latest concept. They have dubbed the 86-metre trimaran Komorebi, which is a Japanese term for sunlight filtering through trees. 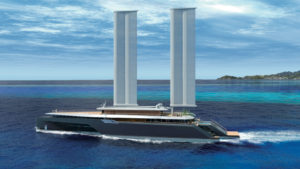 The effect they wanted to create was a sense of gentle tranquillity that would free the imagination and invite occupants to savour life. A strikingly different message from a duo known for their giant multihulls. When their 42-metreDouce France hit the water in 1998, she became – and would remain for several years – the world’s largest cruising cat. She and designs of the likes of the 145’ cat Hemisphere and 234’ motor cat concept Manifesto also ultimately led to the Komorebi concept. “This is a yacht capable of both tackling a round the world voyage and getting into even the trickiest mooring spots because of her shallow draft,” explains Mathias Maurios, a naval architect and one of the 12-strong design team that make up the VPLP staff with founders Marc van Peteghem and Vincent Lauriot Prévost. The project was unveiled just a year ago at the Monaco Yacht Show. 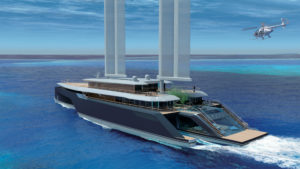 “We got going at the end of last winter,” continues Maurios, “and I think this is the first time that a hybrid craft with two rigid wing masts has been unveiled.  The reason we went for that approach is the efficiency of that kind of mast which is also twice that of a traditional sail. The second reason is that the two “wings” of 380 square metres apiece are automated and require no input from the crew. 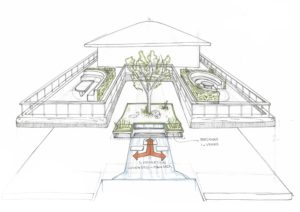 Both feature monitoring systems and automatically adjust to suite wind direction and force plus they are coupled with two 3,300 hp engines. The entire system self-regulates to obtain the desired speed. This means the yacht will use engine power only when there’s no wind and when there is wind, can function either with a combination of motor and wing power or wing power only”. Computer modelling indicates that in 20 knots of wind, Komorebi can make 15 knots using her wings alone while if she combines them with motor power she will make a 30 per cent saving on fuel. “We chose to focus on different propulsion configurations, on range rather than speed. Quality of life and onboard comfort are more important to us,” concludes Maurios. 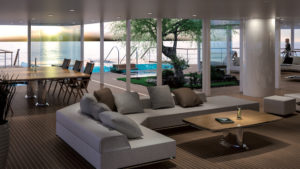 As suggested by her name, the mooted Komorebi centres around relaxation and establishing a harmonious relationship with nature. The result is that the interiors exude a hushed beauty that still also feel wide open to the outside world and offer plenty of private areas. “Light flows in everywhere,” continues Maurios, “and the openings are a dominant factor. We wanted the luxury of space too. Every area is designed for a particular time of the day to offer guests private spaces as well as communal ones.” Speaking of which, Komorebi can welcome up to 18 guests. Her owner has the whole of the upper deck to himself including a 172 square metre suite and two children’s cabins, studies for both owner and youngers, a private lounge and pantry and, of course, al fresco terraces. Six 34 square metre guest staterooms are on the main deck where there’s also a Japanese garden aft and a 6.5 x .8 metre pool in addition to a heli pad on the foredeck. 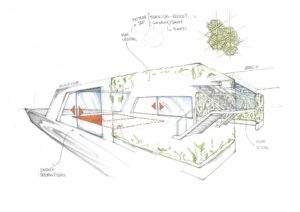 Aft on the lower deck is the beach club, a gym, a hammam with sauna, spa, crew quarters and technical areas. The bow section is given over to the tender garage where two service craft plus a 10-metre limousine are stowed in addition to numerous water toys. “We haven’t completely finished developing the interior design,” explains Maurios. “But essentially, it will centre around light, transparency and sea views. Glass and light wood will be the main materials. These are functional minimalist interiors but they’re warm too: a place where guests will be happy. Elegance isn’t just a question of style, balanced proportions and harmonious lines, it’s also about consistency and ability”. 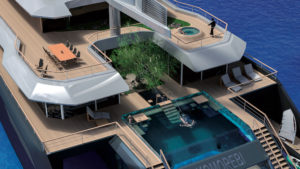 VPLP has poured all of its considerable experience into Komorebi, which sends out a message that’s clear and simple but also a tough call: “Despite her dimensions, we want Komorebi to be a giantess that appeals to everyone.”  Well, the concept has already won its fair share of admirers and the French studio has been contacted by potential  owners with an interest in a Komorebi-style craft of their own. “Some of 86 metres and others smaller at around 40 to 60. But it will take three years to actually build one,” concludes Mathias Maurios. So we have some more time to wait before we see a Komorebi afloat. However, it will be more than worth the wait.