Ferretti Group presented today in Milan at Garage Italia, in the superb setting of Riva Privée, inaugurated today on this occasion, the financial results of 2017, the outlook and the investments plan for 2018. 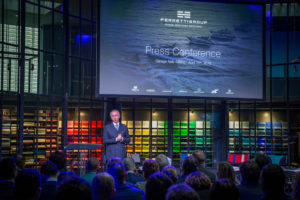 If 2016 marked the first year of net profit since 2008, passing from -29 million euros to +14.1 million euros, 2017 reconfirms the solidity of the Group, with the PAT (Profit After Taxes) equal to 24 million euros euro and a growth of 71%. Moreover, the Group’s total assets reached 971 million euros, of which 46 million composed by liquidity assets.

Alberto Galassi, CEO of Ferretti Group, commented: “The fantastic results of 2017 satisfy us but do not surprise us, because they are the mathematical and natural product of the extraordinary commitment that the whole Group has expressed over the last years. We know very well the formula for double-digit growth, in a single-digit growing market, and we have been testing it for a long time: making boats more and more beautiful, unique and inimitable, investing in Research and Development to combine the excellence of the Made in Italy style with technological avant-garde, that only a Group with our history can boast. The numbers prove it: thanks to the decisive support of the Weichai Group and Mr. Piero Ferrari, the company has achieved a record profit this year, rose to 24 million euros. By decision of the shareholders, the cycle profit will be entirely reinvested in Research and Development on new models, which will be added to the 30 developed in recent years. The production capacity of the Group’s 6 shipyards and the workforce also grew, demonstrating that yachting, if managed at best, creates important job opportunities in Italy as well. 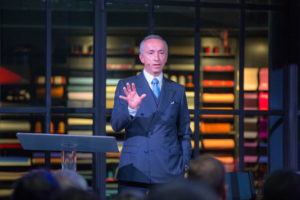 The brilliant results we have presented today are largely generated by the success of the new serial models, presented in the four-year period 2015-2018, products of great success on the international markets which accounted for about 68% of the total sales value last year. Thanks to the investments allocated, to those planned for the year and an ever-expanding and varied fleet, we are aiming to grow even more, with increasingly surprising percentages, thus creating a solid basis for the development of the next industrial plan, which will be presented at the Cannes Yachting Festival, next September.”

After completing the three-year plan with optimal performance and having fully regained the leadership of the sector, Ferretti Group confirms the strategic direction already outlined and successfully pursued during the last four years: from 2015 to the end of 2018, 90.8 million euros have been invested and allocated to new investments in R&D and in new products development, for a total of 30 new models, of which 8 only in 2018. 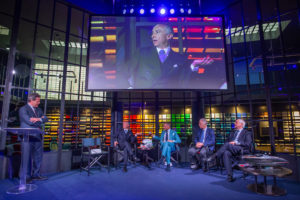 The outlook for 2018 foresees a production value of 704 million euros.

The 2018 project also includes a recruitment plan of 80 people in all the shipyards, located in Lombardy, Liguria, Emilia Romagna and Marche. The recruitment will focus in particular on the Ancona shipyard, dedicated to the construction of the large steel and aluminum boats CRN, Riva, Pershing, and the Custom Line fibreglass boats.