“Avery clean, rigorous design. Exterior lines that are essential and simple enough to gain the approval of both owners with traditional tastes and those with a love of modernity.” The official description by the Codecasa management of the hugely successful Vintage series from a yard founded in 1825 by master shipwright Giovanni Battista Codecasa. 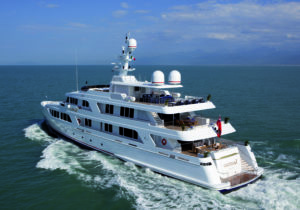 After the splashing of the first two 42-metres (Magari in 2011 and Libra in 2013), the series continued with last summer’s 50-metre Gazzella and is now pushing on with the challenging yet fascinating search for a timeless style that will send it powering confidently into the future. 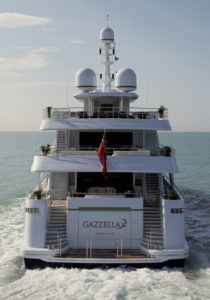 The project was developed entirely in-house by the yard’s own technicians and architects who have produced a yacht with a tough steel hull and aluminium superstructure lifted and lightened by a classic white livery. At 49.9 metres in length and 10.2 in the beam, Gazzella has four decks connected from top to bottom by a four-person lift. Speaking of which, the sundeck has been designed specifically for chill-out times with a bar and an alfresco lounge complete with sofas and armchairs under the deckhouse overhang. Aft, perched on a large open terrace, flanked by two roomy sun pads and enjoying an unobstructed view of the sea, is a large hydromassage tub in which up to five to six people can kick back and luxuriate in the sun and surroundings. 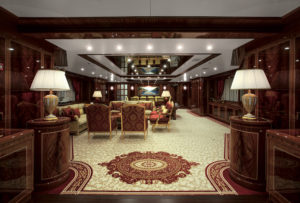 As is the case with Codecasa’s other yachts, Gazzella has custom interiors crafted in line with input from her owner. In this instance, that means a classic, decidedly sumptuous impact with traditional materials such as mahogany matched with a wide array of marble and finishes for the floors and other areas.  Brazilian marble, for instance, is used for the bar top and for the smoking tables in the sky lounge on the bridge deck where blue is the dominant colour, the Zanaboni armchairs included. 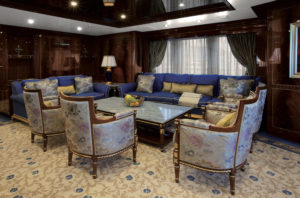 The flooring on the bridge deck, the hall and the main deck is a mix of gold Calcatta marble with yellow Siena inlay and black marquina. In the master and VIP bathrooms, honey onyx combines with masterful custom mosaic work by Sicis on the shower walls. 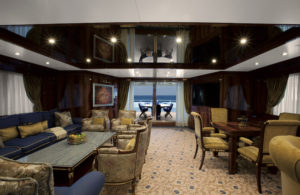 The list of the mostly Italian luxury brand accessories continues with lamps and lights by Baldi, BCM, Lumis and Sigma, and bathroom fittings and other features by Zucchetti, Nicolazzi and THG of France. Lastly, aside from fabrics and textiles by the Designer’s Guild, Jane Churchill, Agena and Nobilis, the sofas and armchairs are by DL Décor while Zanin of Venice created the stunning gold leaf panels with mother of pearl decoration that adorn the walls of the main staircase. 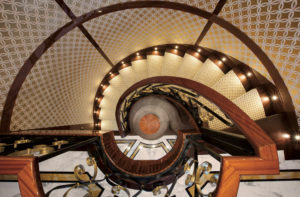 All of which goes to prove that sophistication is the byword for the interior design right throughout Gazzella. Wonderful natural light pours in through her large windows too, brilliantly underscoring the elegance of the saloon on the main deck which features gold and red sofas and armchairs and a mahogany smoking table with gold inserts. It does the same in the airy dining room that opens out forward of the saloon and is dominated by a 12-seater mahogany table beautifully inlaid in maple. 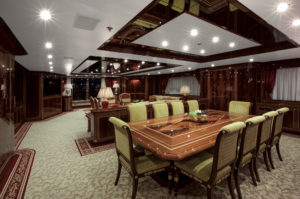 The dining area connects to port with the galley which has a central island, and to starboard, the lobby from where a sublime stairs links main, bridge and lower decks. Natural light and air are the signatures of the VIP cabin which is just before the master on the corridor. The master itself includes a private study and brings the main deck to an end. Guests are accommodated two further double cabins and two twins on the lower deck, all it goes without saying, richly decorated and furnished. 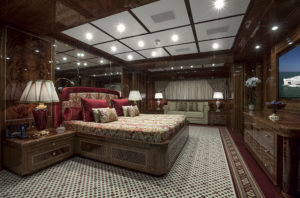 Despite her genuinely classic allure, Gazzella sports all of the latest equipment and instrumentation, proving that rather than celebrating a lost time, she is injecting new lymph into a style that was timeless all along.