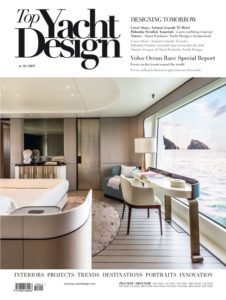 Here is the editorial by the editor in chief: Matteo Zaccagnino.

2017 is closing on a high as the nautical design sector proves fertile ground once again. In this last part of the year, it has shown itself to be in enviably good health on all fronts with the sailing, motor and cruise vessel segments all buoyant. On the eve of the Monaco Yacht Show, the wraps were whipped off Tango, the latest addition to the Wally 100 family. Technical and stylistic considerations aside, the key to this 30-metre megasailer’s success lies in the astonishing teamwork that went into her. The project screams quality: from Persico Marine doing the build to Mark Mills crafting the waterlines and Pininfarina styling the interiors. All focused on bringing form and substance not just to the owner’s desires but also Wally founder Luca Bassani’s vision of what sailing is all about. Tango is an important milestone in the evolution of yacht design because she combines functional demands with formal and aesthetic considerations. The renewed vitality in the sailing arena is being fuelled too by the new AC75s. The next America’s Cup boats raise the whole foiling concept to new heights by using them this time on monohulls. A technological challenge that will precede the sporting one. While there may be debate about abandoning the multihull format, clearly there is no going back. The thirst for performance is fuelling research and experimentation, both of which are central to all design work. We are also seeing the link between the car sector and broader design world go from strength to strength. This is where Studio F.A. Porsche, which designed the Dynamiq GTT115 clothed in exterior lines that are a new nautical take on the iconic Porsche 911, has a winning card to play. Finally, 2017 saw the arrival on the scene of MSC Seaside. She is not merely the largest cruise ship ever built in Italy but more importantly still, was commissioned by an Italian company. Another major milestone moment for the Made in Italy movement in which Fincantieri continues to the way on the maritime front.

And don’t miss the special insert on the Volvo Ocean Race! 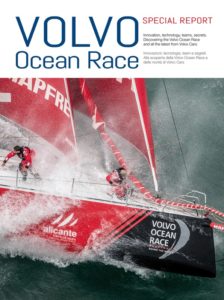 Here is the Vor’s Editorial

What more is there to said about the endlessly fascinating Volvo Ocean Race? The images and news that pour in in virtually real time from the boats and crews taking part in the gruelling event make words almost superfluous. The enthralling language used for this event sounds like something straight out of an adventure novel. But there is one aspect of the race that deserves closer investigation. In this special, in fact, we turn the spotlight on the role of technology which is the real secret ingredient in this hugely successful recipe. What we found was that even more than a competitive event, the Volvo Ocean Race is a genuine research laboratory, a test bench for new solutions and materials that will not just make the race itself more spectacular but the boats safer. Safety has always been one of the cornerstones of the Volvo credo. It was, after all, one of their engineers, Nils Bohlin, who, in 1959, presented the three-point seatbelt to the world for the first time. Almost half a century later, the Swedish company’s progress in the safety arena through the likes of such cutting-edge features as the City Safety, Cross Traffic Alert and Run-off Road systems used in the new XC40, mean it has become the benchmark on the world stage. So it was no coincidence that in 2001/2, Volvo decided to link its name with an event that is so much more than just a sailing competition. The 2017/8 edition looks set to be particularly significant too with sustainability one of the key words. During the race, the crews will also be tasked with gathering information on factors such as salinity, dissolved CO2 and algae levels in the oceans they traverse. This data will help create a more exhaustive picture of plastic-related pollution and its impact on ocean life. It is but a short step from sea to road, however. Here too, Volvo’s commitment is unstinting. This year, in fact, the Swedish marque announced that it will be producing only hybrid and electric cars from 2019. A truly ground-breaking move that will see technological innovation truly serve sustainability.