So young and already so victorious: this is the sixth award of the 76’ Perseo since its world debut in September 2015, a testament to the success of a boat destined to enter the Hall of Fame of great Riva classics.
The latest recognition is the “Boat of the Year Japan Award” as “Biggest Imported Yacht of 2016”, awarded yesterday, March 2nd, during the opening day of the 2017 “Japan International Boat Show”. 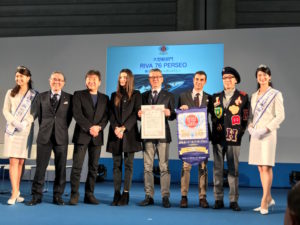 The “Japan International Boat Show”, the most important nautical event in Japan, takes place until March 5th in two different locations of the city of Yokohama: Pacifico Yokohama – the indoor exposition area – and the Yokohama Bayside Marine, where yachts displayed on water can be admired.
Riva participated via its own exclusive dealer Lyu Company, who presented two iconic models of the open series: the legendary Aquariva Super and Iseo. 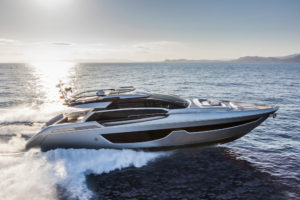 “This new victory for Riva 76’ Perseo fills us with pride and satisfaction” commented Stefano De Vivo, Chief Commercial Officer of Ferretti Group. “With this vessel we have accomplished remarkable success all over the world, which is evidence of its status as a style icon within the coupé fleet.
To receive a recognition of this caliber in an extremely selective and very important market for Riva confirms the appreciation which the brand has received in Japan and the rest of Asia, reinforced by the imminent arrival in Hong Kong of the first unit of the new Riva flybridge yacht, 100’ Corsaro”.

The new coupé is the fruit of the collaboration of designer Mauro Micheli, who together with Sergio Beretta founded Officina Italiana Design (the exclusive design studio of the entire fleet), along with Ferretti Group’s Strategic Products Committee and the Group’s Engineering Department. 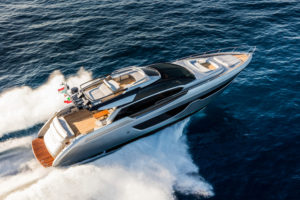 Its sporty aesthetic is further enhanced by more than 40 square meters of glass surfaces. The large windows in the hull, used on both walls, are composed of two elliptical surfaces that together form the Riva logo, made of a material that has always distinguished the brand: polished stainless steel.
The large sun deck is seamlessly integrated into the aerodynamic lines of the yacht, allowing you to relax in privacy, as well providing a place to pilot it from a prime position.