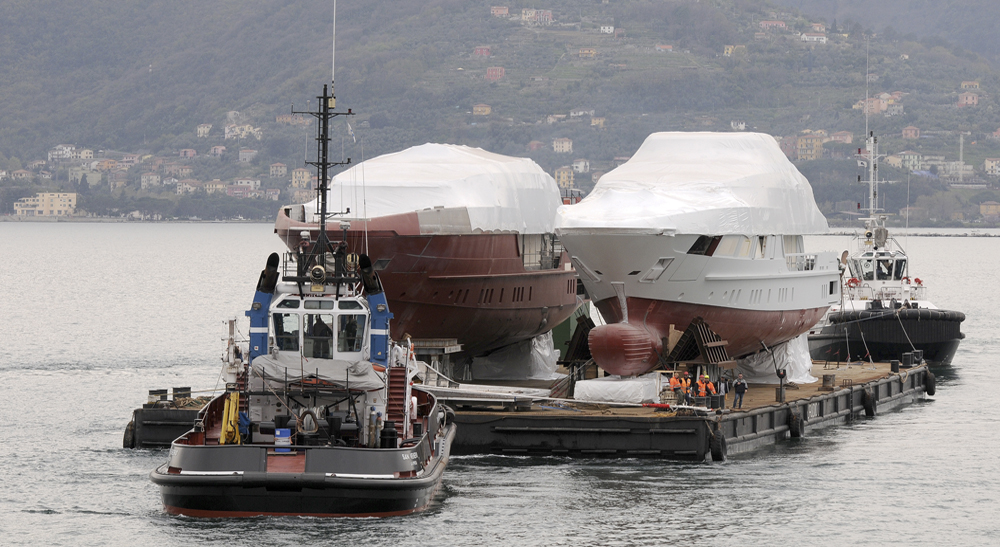 Sanlorenzo, after the recent signing of an agreement for the rental of  new premises from La Spezia’s Cantieri San Marco, began the delocalization operations for the production of metal superyachts, until now carried through in Sanlorenzo’s shipyards in Viareggio.
The first two models in the new 52Steel rang – 52 meters long steel superyachts – were moved, with the help of a barge, from the port of Viareggio to La Spezia. La Spezia’s new production site is a large sized, fully equipped area with direct access to the sea, allowing for the design and production of 40 to 80 meters long metal boats.

Sanlorenzo will thus be able to organically develop its Superyacht division, in charge of the production of oversized metal boats, a segment little affected by the economic crisis and representing today a significant portion of the company’s turnover.

In La Spezia, Sanlorenzo is also planning the opening an important refitting area, dedicated to large boats. With the opening of the La Spezia shipyard, Sanlorenzo will be able to count on three distinct production sites:
1.  The company’s HQ will still be located inside the Ameglia shipyard, and will continue the production of 78 to 106 feet long medium-sized fiberglass boats.
2.  Sanlorenzo’s premises in Viareggio will focus on the production of 112 to 126 feet long large fiberglass yachts, taking advantage of the new spaces available since the relocation of the Superyacht division.
3.  The La Spezia shipyard will focus on the production of the largest, metal-made superyachts, which, taking size into account, can be considered as proper “cruising vessels”.

Sanlorenzo, through this strategic expansion decision,  re-asserts the company’s constant growth in the last three years, which resulted in a 220 mln turnover in 2015 and a 21 mln Euros Ebitda (with a net profit of 6 mln Euros). As for 2016, Sanlorenzo mantains the second position in the world ranking of the top 20 builders for yachts above 24 meters in length.