Trieste folk have the sea in their blood. They’re surrounded by it from the day they are born. You could even go so far as to say that Trieste is the sea and that its people seem to learn to sail before they learn to walk. It should come as no huge surprise therefore that Gianluca Adragna has so many successful boat designs to his credit. 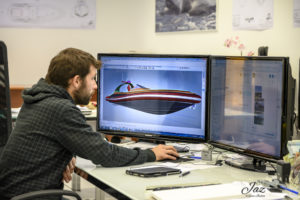 He hasn’t looked back, in fact, since he founded his studio in 1997. In a way, he had no real choice in the matter as his father started bringing him out in his boat from the age of two. He is also a past-pupil of the prestigious Istituto Nautico Tommaso di Savoia Duca di Genova in Trieste,  the renowned Southampton Institute of Higher Education and the University of Genoa. “You have to have a feel for boats,” he repeats mantra-like. “You can’t just aim to produce a good design. You need lots of practical experience and knowledge of a kind you only get by actually going to sea”. Passion is the other essential, needless to say. Adragna has that in spades – he designed his first craft when he was in his early twenties. Regina di Cuori was a seven-metre and won her category in the Barcolana an impressive five times. “That experience was a great help in understanding what building a boat really means and all the problems it entails. I was helped by my father, a fellow student from the Nautical Institute and a friend who was a technician at Grandi Motori Trieste, a real bonus. It’s one thing to design on paper but another thing altogether to drill holes in sheet metal,” he laughs. His vision and approach are similar whether he tackles sailing or motoryachts, and throughout his career, the academic has always been reflected in practice. 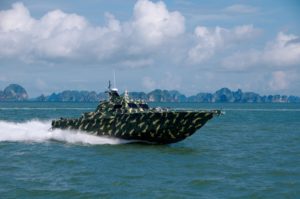 Designing fast patrol boats was another plus. “When you deal with that type of boat, you realise nothing can be left to chance. You simply can’t compromise on anything,” the Trieste man says. “There is a whole slew of factors to consider: from armour-plating more vulnerable areas, such as the bridge and engine room, to meticulous weight distribution to avoid compromising performance and, most importantly, crew safety,” continues Adragna who worked on the likes of  the  Raptor SWOC, Cobra ASD, Manta MKI e MKII ASD and Piranha ASD.  What makes such seamless transitioning from pleasure yachts to military vessels, sailing to motorcraft, possible is, of course, the naval culture with which the Adragna’s studio is imbued.

He is flanked in his efforts by Michel Wetzl and Primoz Barut. “Right now, we’re working on the Portofino X for X Marine. Once again though, we’re not simply sketching the hull lines and interior layout but we’ve analysed every single detail to the last,” he comments. “Hull, deck and bottom are CNC-machined. We’ve calculated the thickness of all the interior surfaces to the last millimetre, furniture included. The floor plates, tubing and longitudinal structure were all designed as a function of weight and speed,” he concludes. “We engineered every single millimetre of the boat.  Knowledge like that means we can talk with suppliers, plant manufacturers. 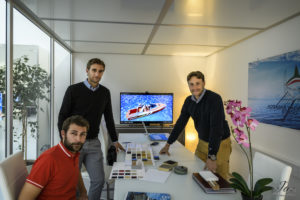 This is a huge advantage to the yard cost-wise and also cuts the margin of error to the bone”.  Part of the credit must go to the studio’s exceptional mastery of design software. However, the level of sophistication achieved by, for instance, Adragna’s engineering work for the all-carbon 23-metre Adler Suprema motoryacht cannot be so easily explained. 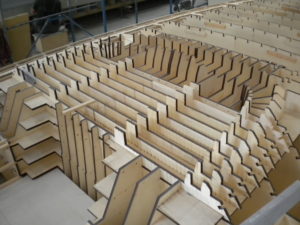 Form must to some extent follow function in design but it is equally true that expertise is required to make a technical contribution.  The kind of knowledge you don’t get from a computer programme. Rather it is the product of a lengthy apprenticeship of sorts. “At school, we were taught to trace waterlines and hull forms the old-fashioned manual way.  There is no doubt that computers and software programmes have made the whole process of design much easier. Nonetheless, looking at something generated by software on a computer screen is a very different kettle of fish to understanding the reasoning and calculations that produced that result in the first place,” says Adragna. Regina di Cuori’s success in the sailing arena was followed up by two other equally well-received models, the Stream 40R and Stream 40 Emotion. 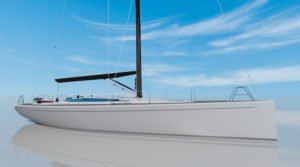 The Adragna Yacht Design Studio is currently developing several new models inspired by that experience, with the lines of a 50, a 52 and a 55 Deck Saloon already penned.