Over the last few years, multihulls have taken off in more ways than one. Their popularity has been fuelled to a large extent by racing success in the likes of the America’s Cup.

The knock-on effect has been massively accelerated research, development and experimentation in terms of both new solutions and materials. Once seen as both exotic and mysterious, multis are now increasingly mainstream as they deliver twice the space of their monohull cousins and absolutely respectable performance figures. More importantly still, comfort and stability levels both at anchor and underway are exceptional. In short, they are the answer to many owners’ problems. It was no great surprise therefore when multi expert Mitch Booth, winner of two Olympic medals and various world titles, founded BlackCat Superyachts in 2015.

The new company’s first step towards the market came late last year with the unveiling of an eye-opening 50-metre supercat concept. Booth gathered around him some of the most authoritative pens in the sector for this debut project, principally yacht designer Malcom McKeon who crafted the lines of the maxi cat.

M2 Atelier, on the other hand, was responsible for the interior design, while Booth called in the North Technology Group, which comprises North Sails, Southern Spars and Future Fibers, to assist with the sail plan, rigging and sails themselves. For the construction, Booth has selected Baltic Yachts, probably the only yard capable of building carbon hulls of these dimensions. 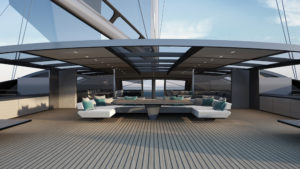 Once completed, in fact, the BlackCat 50 will be the largest single-structure carbon yacht in the world. It is, in fact, fairly unique all around. “There’s nothing similar on the market at the moment,” comments Booth. “This concept combines the practicality of a large, stable platform with very respectable performance.” Put more bluntly that means that the supercat will be capable of making speeds of between 20 and 30 knots. 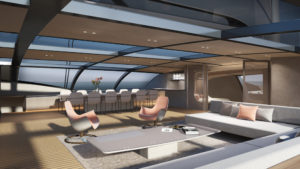 From a styling perspective, McKeon has gotten around the thorny issue of the high, rather graceless profiles that larger multihulls have so far had to contend with. He did so by taking his lead from the car design world, borrowing it from it the taut, concave surfaces on the two hulls. Pairing the latter with extensive superstructure glazing lent the BlackCat 50 a dynamic profile and nicely-balanced proportions. 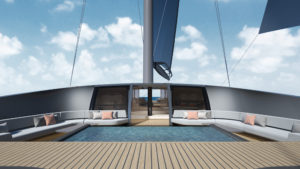 The interiors are a joyous hymn to space, revealing a total of 320 square metres on top of the 620 square metres available on deck, by making efficient use of the cat’s 20-metre beam. The master suite spans the bridge deck forward but also extends to a port hull walk-in closet and bathroom. 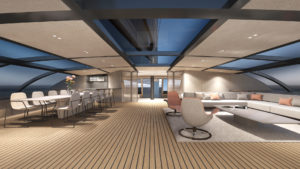 From there too the owner has access to the gigantic forward cockpit, a sunken space that can either be kept for his private use or shared with guests who will enjoy a fabulous pool to boot. There are also four double guest cabins in the starboard hull (one is a VIP). 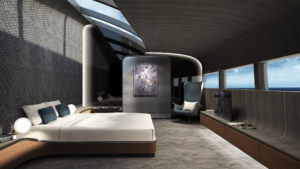 Communal guest life centres mostly around the forward section of the bridge deck where there is an enclosed, generously-sized saloon with wet bar and dining area accessed through the aforementioned cockpit. The beach area is created by open-out platforms that turn the two side stern areas into waterfront sunning terraces.