A  helm station with a wing that extends out over the sea is just one of the many unusual features offered by the DL Dreamline 34M, the latest DL Yachts Dreamline offering to be penned by not one but two of the sector’s leading lights. 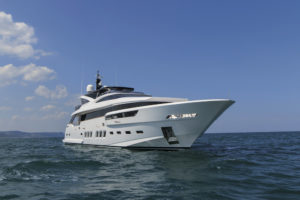 More significantly, however, the DL Dreamline 34M is the product of the Dreamline Project developed by engineer Peter Zuber who set technological innovation and meticulous construction as its mainstays. Elements that, after the huge success of the six DL Dreamline 26Ms, again reappear in the DNA of the DL Dreamline 34M. “We wanted the DL Dreamline 34M to be a new yacht with an innovative hull and underlying concept,” explains Paolo Bencivenni, the CEO of the DL Yachts Dreamline founded four years ago by a group of highly experienced partners from within the sector. 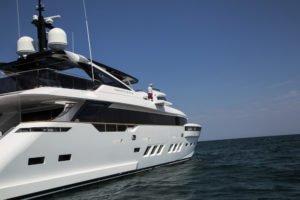 “A yacht that’s easy to handle as many owners like to do the helming themselves, but also one with all the technological solutions derived from the unique store of knowledge our partners enjoy”. Hence the fact that the starboard wing of the helm station on the fly opens out to the side to give the skipper the best possible view for mooring and docking manoeuvres, for instance. 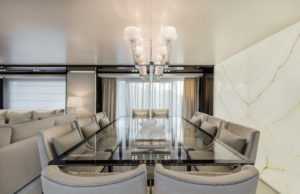 “It’s just one of the aspects of the innovation that drove the yard’s foundation,” continues Bencivenni. “In terms of the naval engineering of the DL Dreamline 34M, that means Giuseppe Arrabito”. A clever choice indeed as Arrabito Naval Architects studio has over 3,000 designs to its credit and when DL Yachts Dreamline asked them to help meet the owner’s new requirements, they produced a dual-functional craft. In other words, it can fairly zip along at about 30 knots but also make more sedate displacement-style progress that will save fuel when called for, translating to a range of 1,800 miles at 10 knots. Noise and vibration have been reduced too as this was vital to allowing guests fully immerse themselves in the direct contact with the sea that architect Enrico Gobbi and Team for Design, who did the interior and exterior design, made their central focus. “This is a yacht with big volumes but its exterior is also dynamic and stylish,” says the designer. 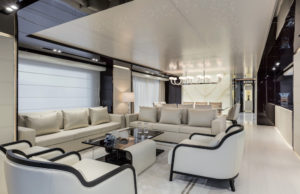 “The design is contemporary but will never date. We focused on large openings and equally large interior spaces with high ceiling heights which range from a minimum of 2.2 metres to 2.5 in the owner’s suite”. The latter is located in the forward section of the main deck, which, in another indication of the DL Dreamline 34M’s liveability, is all on one level from the lounge in the cockpit on. The owner’s suite features two elements that genuinely characterise the exterior and interior layout. The side walls of the cabin are slightly curved to mimic the hull sides which enhances the feeling of contact with the sea. 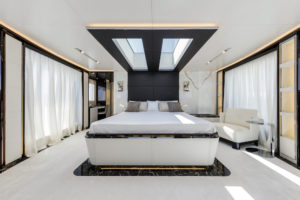 “This”, continues Gobbi, “combines with the wraparound glazing which also runs along the forward wall of the suite with glass panels barely broken by very slender pillars that really disappear in the interplay of reflections from their steel trim”. The owner’s suite is a wonderfully fascinating space, just like all the other areas of the yacht dominated by that effortless sense of transparency. A case in point is the thin onyx sheet between the saloon and lobby, for example – it is both theatrical and a magnificent piece of craftsmanship. Gobbi also designed the steel and glass chandelier for the saloon which was then made by Venetian glass experts, Barovier & Toso. It too creates a spectacularly theatrical effect not forgetting that the lobby is dominated by a gorgeous mosaic on the stairwell wall. 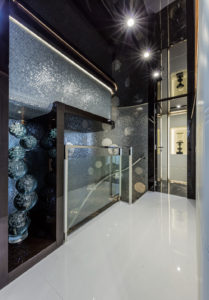 Two fine examples of artistic craftsmanship and the meticulous construction that have become the yard’s bywords and which aboard the DL Dreamline 34M also include mixing the custom furnishings with pieces by Prada and Armani Casa fabrics in the two VIP staterooms and the two twins on the lower deck, while Hermes is used in the owner’s suite. A mix of elegant exterior lines, interior choices, refined finishes and an overall design and construction philosophy best summed up by the slogan chosen by DL Yachts Dreamline for the new DL Dreamline 34M: a new piece of art.