Create a whole new style. Deliver an instantly recognisable design with oodles of character. A lone voice in the crowd. And do so whilst catering to the desires of a client looking for something truly exclusive.  All very doable in theory but in reality, things get complicated the second the designer puts pen to paper.  That awareness makes Enrico Gobbi of Team for Design’s brilliant work on the Aston 50M and 66Ms even more astonishing.

Just to start with the duo’s exterior lines underscore their sleek, sporty yacht profiles whilst simultaneous yielding completely harmonious volumes and perfectly balanced proportions. “It all started with the Aston 66M,” says Gobbi. “We came up with this concept because we are convinced that, after a couple of years of silence, interest is now growing again in this kind of maxi yacht”.

That conviction proved spot on as a client commissioned  Team For Design to produce a 50-metre project that would incorporate the stylistic and design features of the Aston 66M.

The hull is currently in build at Rossinavi and should be completed by spring 2018. “Normally, the limitation with boats of this kind – which we normally refer to as maxi opens – is that they offer less space and volume than a traditional displacement motoryacht,” says Gobbi, adding: “Hence the most stimulating aspect from a design perspective isn’t so much sketching very sporty lines but guaranteeing uncompromising interior and exterior liveability”.  In this latter case, the result was a proper fly.

Interiors-wise, we were particularly impressed by the master suite. Located in the bow section, it makes full use of the beam thanks to the yacht’s wide-body design.

But that’s not all – without resorting to actual fold-out terraces, contact with nature is guaranteed on the port side by a large window that stands slightly proud of the hull, while there is an open balcony on the starboard side.

Windows play a central role in giving depth and breadth to all the spaces aboard, in fact, particularly in the living area which extends across most of the main deck and features expansive floor-to-ceiling glazing. This guarantees unbroken visual contact with the outside world to those in the interior and also lends an extra sleekness to the yacht’s profile. 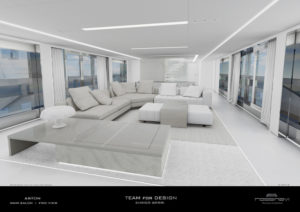 There are automotive references aplenty with this yacht to. “The long ‘bonnet’, the upper cell located aft, which also holds the bridge, give the line the feel of the famous coupés of the past designed by Aston Martin,” continues Gobbi. On closer examination, further stylistic references emerge, not least the shape of the windows at master suite level which is heavily inspired by the design of the tail lights on some of the English marque’s blisteringly-fast models. The Aston 50M thus ticks all the right coupé of the sea boxes. 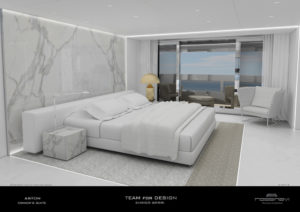 The fact that aluminium is used so extensively in the hull and the superstructure adds further clout to this argument as it is a classic sports car construction material. Performance lives up to expectations too.

With a displacement of under 500 tons, this 50-metre has, on paper at least, a maximum speed of 27 knots and a cruising one of 23, courtesy of the massive power unleashed by three MTU 16V2000 M96L engines coupled with three water Rolls Royce Kamewa water jets.