“It’s absolutely vital for designers to feel free. Here in Monte Carlo Yachts we’ve managed to develop a positive system centred around freedom,” declared Carlo Nuvolari at presentation of the MCY 80. The MCY 80 is the sixth model in the fleet and bears the inimitable stamp of both Nuvolari and his partner in design Dan Lenard. 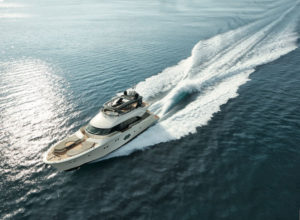 It is also the sixth consecutive year that the yard has unveiled a new model. President Carla Demaria explains: “Vision to us is all about the art of seeing what is invisible to others”. 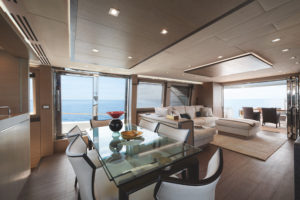 The combination of the aforementioned design freedom and this unique vision has now produced the spectacular 24-metre MCY 80: “Sensational, agile, sleek,” is how Carlo Nuvolari and Dan Lenard described a design for which they took their inspiration from “an ideal of elegance and refinement that we transferred from the designs to the real product”. 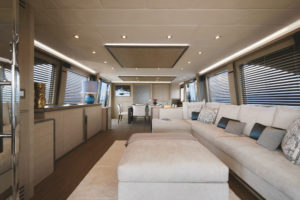 The stylistic approach the legendary duo adopted with the new craft also ensured that the fleet’s family feeling was respected yet allowed the yacht to stand-alone with regard to many features. 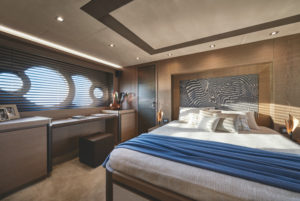 The new MCY80 is another example of the trademark stylistic and design shared by both the Monte Carlo Yachts’ craft and the two designers.  “For most owners and for us all too, the real benchmark is car design. 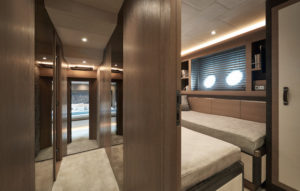 Of course, cars are the most common designed objects in the world. The same tools, the same language that we designers use come from the automotive sector. Our goal has always been to go beyond that and try to create boats that are recognisably that. 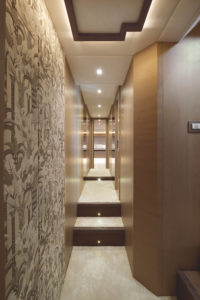 Car design references are all very well for sporty craft but when you’re talking about yachts, you have to come up with genuine designs that will be able to cope with the sea”. 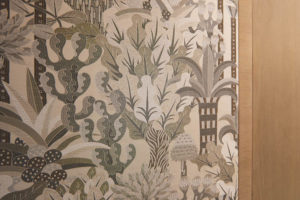 The MCY 80’s architecture and engineering were done entirely in-house at the yard and the model itself is fully in line with the rest of the Monte Carlo Yachts craft, which themselves are effortless meldings of design, styling, engineering and seakeeping prowess. Aboard the MCY 80, that union is reflected in strong lines combined with a softer superstructure sporting a flying bridge with an astonishingly aerodynamic-looking hard top. 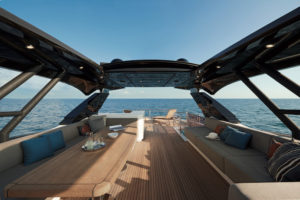 The fly feels like a completely harmonious part of the overall design even though it is very large indeed at 40 square metres. This is the first example of the space that the designers have striven to create aboard – and, of course, succeeded. 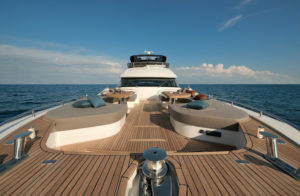 The foredeck too has large sunbathing zones and is accessed directly from the cockpit thanks to the Portuguese bridge, which really sets the MCY 80 in a class of its own as normally the latter simply don’t exist on yachts of these dimensions. 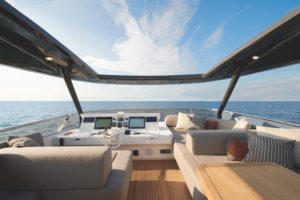 There’s space, space and more space in the aft cockpit which is at the same level as the saloon where, like the rest of the interiors, space meets light to brilliant effect.  The result is that all the various areas feel simple and sophisticated at once as they seem to reach for the sea and drawn it to them.  Next up is the dining room. It is separated from the bridge by a large glass sliding door which, when open, floods the whole area with light. 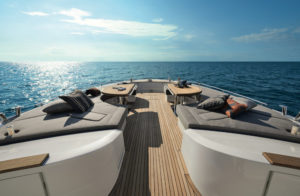 The bridge itself has all the latest technological navigational and management equipment but aside from the console there is also a sofa where guests can sit and watch the yacht being handled. The cabins on the lower deck have the same design elements as the main, not least brushed limed oak floors, leather furnishing inserts and accessories by Hermès, Armani Casa and Minotti. 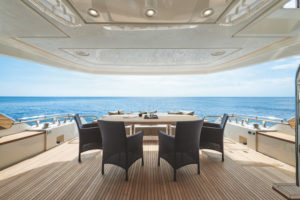 Once again, the emphasis is on natural light. In the two two-berth central staterooms and the VIP forward, there are large portholes while the wide-body master suite amidships has huge side windows. Another feature that sets the new MCY 80 apart and quite literally sheds light on its refined spaces. It’s all about vision but real rather metaphorical this time, as the sea is rarely out of sight aboard.