It won the International Highrise Award in 2014 and went on to be lauded the following year by the Council on Tall Buildings and Urban Habitat. We are talking, of course, about the Bosco Verticale or Vertical Forest in Milan’s central business district which is not only the architectural envy of the world but has also come to symbolise the New Milan. The twin tower design is the work of Stefano Boeri, one of Italy’s most internationally-renowned architects. 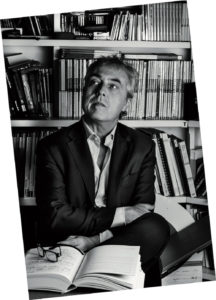 “It’s a metropolitan reforestation project,” he tells us. “By increasing the vertical density of greenery (there are almost 2,000 tree and shrub species adorning the towers’ facades, ed.’s note), we are attempting to boost both plant and animal biodiversity, reducing urban expansion and help mitigate the microclimate”. Boeri has also penned a similar tower in Lausanne and has been commissioned to create an entire city of vertical forests near Beijing, which is, of course, infamous as the most polluted area of China.

The architect has, however, long been fascinated by environmental issues and how buildings interact with their surroundings. This obsession has triggered intriguing impacts not only on his land-based static designs for buildings, but also his mobile ones. A subject dear to the heart of boat lovers, naturally. “I have studied concept very carefully, particularly whenever I was working on a waterfront or a port. Ports are places where flows from both land and sea cross paths. Whether it has been designing on a large-scale – Genoa, Salonicco, Trieste, Marseille, Naples – or on a smaller one such as the Marina di Carrara and La Maddalena, the idea has always be to think of how the architecture will look as you arrive in from the sea. You can apply the same approach to a boat but push it to greater extremes. A yacht’s relationship with its context changes all the time as its ‘city’ is the mooring itself”.

Boeri’s first foray into this kind of work was in the mid-90s for a competition to design the Parodi Bridge in Genoa. “We imagined building an island, by which I mean cutting off one of the long port’s long fingers, isolating its tip and digging down to create a kind of plaza below water level at the centre of the port that would have been connected to the mainland by a kind of underwater passage”. That radical concept never made it off the page but struck such a chord with Boeri that traces of it have appeared in some of his most important subsequent projects. “It stuck in my mind, with elements surfacing, for example, in a small port in the Grenadines which has a yacht club and waterfront. But the most obvious example is Marseille  where we designed the Villa Méditerranée, a Mediterranean-inspired artistic and cultural research and production centre”. 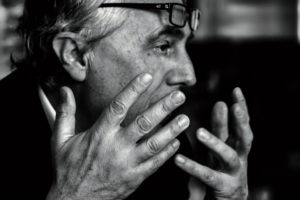 Another maritime project by Boeri is the former Military Arsenal in the La Maddalena Archipelago off Sardinia, an interpretation of the relationship between the surrounding natural elements and the severe Italian military architecture designed to meld into the landscape.  It has produced 15 very low buildings of the same height as the existing structures, and the spectacular Casa del Mare conference centre which provides perfect views. Very much the same approach applies to boats.

“I haven’t yet designed a boat but I feel I would begin by thinking about flows, fluidity of movement, on how to get natural light inside and the whole concept of ‘Existenzminimum’ – working in very small spaces – because boats demand absolute specificity in the materials, language and logic of use applied to them”.