With the upcoming America’s Cup, we have reserved part of our new issue to this event. As regards, technology and design are very close one to the other. And the America’s Cup is technology’s birthplace. 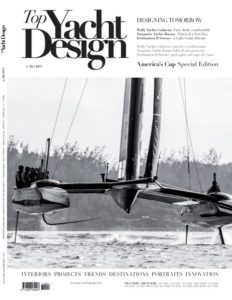 After what seemed like an endless wait, the moment of truth has finally arrived. The 35th America’s Cup has swept away any lingering doubts and confirmed that catamarans and foils are the perfect combination for this type of competition. Huge progress has been made since the previous edition in which the AC72s had an eerie other worldly look. The new cats are smaller than the ones that competed in the 34th Cup but don’t be fooled for a minute. The AC50s are the very pinnacle of modern sailing technology. The big challenge will be to keep them foiling for over 90 per cent of the competition. Which means literally flying over the sea for virtually the entire course. A challenge that all the teams involved have embraced, although each one has gone its own way in its attempt to deliver. Oracle Team USA turned to Airbus to avail of the ultra-sophisticated aerodynamics adopted on aircraft of the likes the A 320 to help it defend the Cup. It’s only a short leap from aeronautics to the automotive world as proved by Sir Ben Ainslie’s team which partnered up with Land Rover to develop a multihull design bristling with solutions tested successfully on the company’s various models. The New Zealanders, of course, are innovative by nature. They brought a catamaran to Bermuda that sports cycle grinders to help the team adjust the sheets and foils. Even though Italy doesn’t have its own team this time, we are involved in the Cup through the likes of Persico Marine which played a pivotal role in the development and building of various components of the British multi. The Veneto-based company Dainese supplied Emirates Team New Zealand with the revolutionary Sea Guard vest which adopts airbag technologies honed successfully in Moto GP. This brings us finally to the world of watches. Never before have so many watch-makers been involved in the America’s Cup. Everyone from Officine Panerai to Ulysse Nardin, Zenith and Omega is in the mix as, once again, the America’s Cup proves itself an excellent test bench for honing new technical solutions and testing out unusual materials with one focus: to improve performance and reliability. Just like an America’s Cup multihull, in other words.