We recently spoke to Alessandro Risi about his stunning 50-metre explorer design. A very well-qualified young yacht designer, he holds a degree in architecture and design from the University of Turin as well as a Masters in nautical design from Genoa. He has also just completed an internship with Wally Yacht. 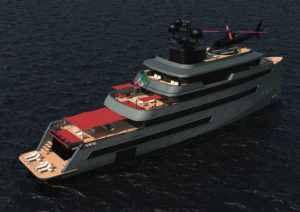 Risi’s explorer is an imposing yet very modern craft that brings a futuristic twist to classic 20th century lines. Although clearly Wally influenced, the design displays an impressive originality and creativity. The bow is particularly striking, rising all the way up to the third deck and lending a sense of power and personality to the hull. 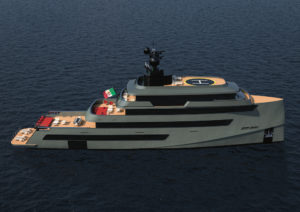 “The key words that were in my mind when I started my design were: imposing power, minimalism, spareness. Combined with functionality, those qualities sum up my design philosophy which centres around the creation of a clear, concise outline that reflects the owner’s tastes,” he told us. “A hull that will be as happy in the Tropics as in the Arctic Ocean, and that will capture the attention of anyone that sees it. I took my inspiration, particularly in terms of its form and imposing stance, from the battleships of the last century,” he continued. “Having designed a reverse bow, I created a crease that tapers all the way back to the stern. The hull has a hierarchy of materials that spans everything from raw metal with visible welds, typical of the big, untreated working vessels, to glass, a classically noble material used to define the apertures and lighten the whole the thing,” he concluded. 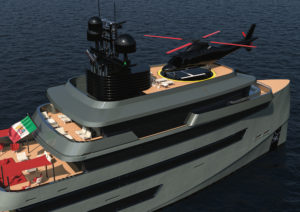 The hull forms are stepped like a staircase and at the extremities are encased in the glazing of the interior deck structures. Everything is connected with a series of oblique lines that run through all the decks, slenderising the whole craft and giving it a sleeker look.

The yacht has five decks altogether.
The lower deck, which is home to four guest cabins and two for guest staff, is at its best aft. Hidden away behind the glass door that separates the external beach area from the interior, is an extraordinary infinity pool that will give guests the feeling they are swimming in the sea no matter where they are in the world, be it the Tropics or Greenland. Wooden beams are used for the walkways in the pool area, and there’s also a bar and a spa. The toy garage is forward. 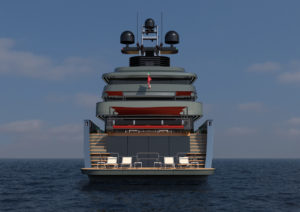 The main deck has a classic layout spanning the main saloon, a dining area, lobby and galley as well as sun pads aft. In line with the latest trends, the upper deck is given over entirely to the owner’s quarters, and has a large aft balcony and a wellness area forward. The interior of the latter is divided up with sliding panels that can be used to create one large open plan area or several smaller spaces to suit changing needs. The aft glass door can be opened to create a single open space that encompasses both interior and exterior too. 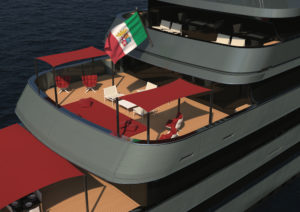 The top deck includes an antenna and instrumentation tower that is a work of art in its own right. There’s also a large sunning area which, when required, converts to a touch-and-go helipad.

The boat will be called Dozer because when Eric Lepeingle, head of Wally’s motoryacht division, saw it for the first time, he exclaimed: “It’s like a Boerboel or bulldozer!”.