Twenty five years is a major milestone for both a person and a business. It can seem either a very long time or a very short one. It all depends on what that quarter century has brought.

The Southern Wind Shipyard is a case in point. Strangely, however, its particular success story came about more by chance than design. “I chose a South African boatyard to build a boat I’d commissioned. Then, as often happens, I just fell in love with it and ended up buying it out,” says  Willy Persico.

“At the time, there were two boats in build: the first was my own Ron Holland design and the other one was a Bruce Farr. The latter yacht gradually caught my eye because of a whole string of features and resulted in a partnership with Bruce that has lasted 25 years and is now part of the yard’s history”. 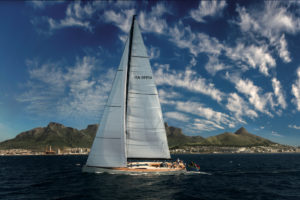 Innovation has been central to Southern Wind Shipyard’s success from the outset. The Bruce Farr design Persico was so taken with had a central cockpit and a central steering position which was quite a tried and tested layout. The third vessel under Persico’s skippering proved the turning point, however.

“At the construction stage, I realised I wanted to move the guest and owner area forward rather than aft,” continues Persico. Hence the idea to create a double cockpit and a galley with chart area and two crew cabins aft. That layout has in the ensuing years become the signature of the yachts crafted by the Cape Town yard.  It was welcomed with open arms by the market too and ushered in whole new design philosophy to the sailing world.  Persico’s farsightedness also brought a cluster of pens to the same table – everyone from Bruce Farr to Reichel-Pugh and Nauta Design. “Not forgetting Architect Minniti,” chips in Persico. 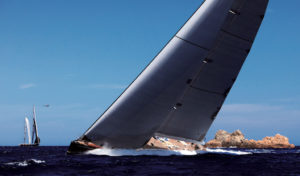 “He made a pivotal contribution from the start and for several years was absolutely fundamental to the way we planned the interiors which is something I like to have a hand in.  When I first got into this business, I chartered several different boats including a Camper & Nicholsons and a Jongert, just to get an idea of what was out there on the market. It turned out to be an invaluable experience that helped me develop new solutions”.  Even now the design phase remains  a central tenet of the Southern Wind Shipyard philosophy.

“I have an ongoing dialogue with Mario Pedol and Massimo Gino from Nauta Design,” comments Persico. “It’s like a kind of osmosis based on our reciprocal experiences and allows us hone and develop new layouts. Maya Ray, our first 95’, for example, is a larger evolution of that first boat Ron Holland designed for me. And three other craft were conceived around its configuration: that’s two 93 and two 95 footers in all.”  Southern Wind is also renowned for experimenting with new materials and was one of the first yard to intuit the potential of composites and epoxy resins for hull construction. It also first used carbon to build Whisper 15 years ago. “After that came infusion,” adds Persico. “We used that technique on the very successful 100’ series. In all these years we’ve never been afraid to raise the quality bar again and again”. The golden rule, however, has also been to deliver yachts that really can be sailed independently.  “We fitted our first captive winch only recently on the first 110’ and our first retractable keel just a short time ago too,” says Persico.

What really makes the difference is that every single Southern Wind yacht gets a 7,500-mile ocean-going shakedown before delivery. That’s the sort of test-drive that leaves no room for improvisation. So what does the future hold?

“The performance levels many owners are now aspiring to is a priority and we’re focusing our efforts on that front with ad hoc designs. We unveiled the first of those, a 90’  with Reichel-Pugh lines, just recently. We’re also continuing on the course we marked out 25 years ago for a yard that builds bluewater yachts designed to deliver a completely comfortable seafaring experience that doesn’t compromise on plenty of speed under sail”.